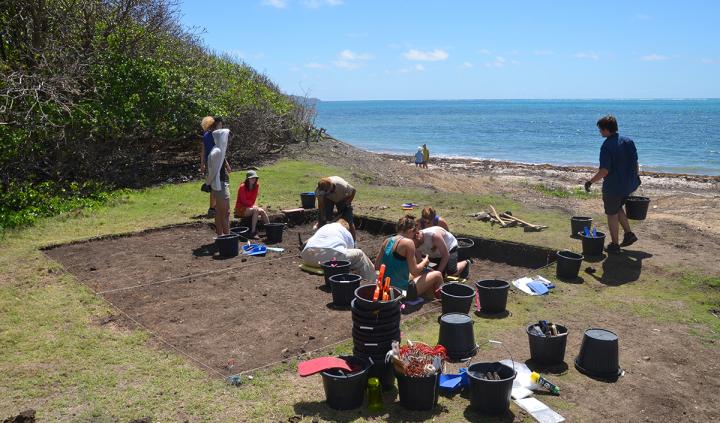 EUGENE, Ore. – Dec. 18, 2019 – A fresh, comprehensive look at archaeological data suggests that seafaring South Americans settled first on the large northernmost islands of the Greater Antilles rather than gradually moving northward from the much closer, smaller islands of the Lesser Antilles.

That pattern of movement emerged as an eight-member University of Oregon team reevaluated 2,500 radiocarbon results from cultural sites on 55 islands. Migrations occurred in two waves, the first beginning 5,800 years ago and the second 2,500 years ago, the team reported Dec. 18 in the Science Advances.

Caribbean colonization has been little understood, said Matthew Napolitano, the study’s lead author and a doctoral student in the Department of Anthropology.

“This scenario contradicts a competing stepping-stone model that many archaeologists still subscribe to, which asserts a south-to-north settlement beginning in the Lesser Antilles,” he said.

Based on the team’s examination, the first Caribbean islanders went directly from South America to the northern Caribbean, initially settling on the large islands that became Cuba, Hispaniola and Puerto Rico.

These islands likely offered productive lands and resources that would have been attractive to early settlers. Early colonization involved the movement across hundreds of miles of open seas, likely in single-hulled canoes.

The new study, done over a four-year period, is the culmination of a graduate student project supervised by Scott Fitzpatrick, associate director of the UO Museum of Natural and Cultural History and professor in the Department of Anthropology. The work was designed to test the stepping-stone model.

In their reexamination, the researchers assessed the reliability of radiocarbon dating at each site, using strict criteria related to the geologic and archaeological contexts of the dated material, the quality of the samples and the lab conditions under which the materials were analyzed. Slightly more than half of the dates passed muster, despite more than 50 years of scholarship in the region.

The dates were then subjected to rigorous statistical analyses, resulting in a new and exceptionally robust colonization model.

“By carefully applying these criteria, we were able to improve confidence about the reported dates, as well as whether the dated materials actually relate to human activity,” said Fitzpatrick, an expert in island and coastal archaeology whose research focuses on the Caribbean and Pacific. “Our analysis of the resulting acceptable dates, which represent human occupations on 26 islands, provides the first reliable model for initial arrival in the region.”

The study has also resulted in the largest publicly accessible database of radiocarbon dates for the region.

Note: The UO is equipped with an on-campus television studio with a point-of-origin Vyvx connection, which provides broadcast-quality video to networks worldwide via fiber optic network. There also is video access to satellite uplink and audio access to an ISDN codec for broadcast-quality radio interviews.

Scienmag Jan 7, 2020
Credit: Hua Bai AMES, Iowa - Researchers may have discovered a way to turn back the clock on aging heart…

Shrinking brain tumours and opening the door for targeted cancer…