The brain is made up of a complex series of networks—signals are constantly bouncing between those networks to allow us to experience the world and move through it effectively. 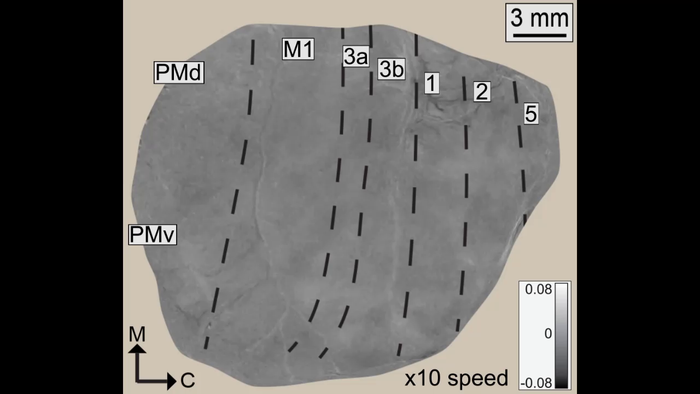 The brain is made up of a complex series of networks—signals are constantly bouncing between those networks to allow us to experience the world and move through it effectively.

Understanding how brain networks are organized is key to uncovering how they work. Scientists have learned that brain activity at rest – while sitting quietly – can provide approximate maps of the network organization. But maps generated with this approach miss critical details. An equivalent street map would help a pedestrian navigate from one neighborhood to the next but would offer little help for reaching a more specific destination.

New research from the University of Pittsburgh shows that generating detailed maps is indeed possible with a new imaging method that offers high contrast and high spatial resolution. The study conducted in monkeys shows that intrinsic signal optical imaging (ISOI) can reveal cortical architecture in greater detail than previously seen in living brains.

Functional magnetic resonance imaging (fMRI) is the primary tool for doctors and researchers to observe brain networks. The procedure is non-invasive and takes about 30 minutes. Observing brain networks in this way serves a range of interests from basic research, like understanding brain evolution across species, to fingerprinting brain pathophysiology, as in dementia or autism. ISOI has a lot in common with fMRI, but the detail is much richer, which matters considerably given the relatively small sizes of brain networks.

“Our focus was on studying the connections between motor and sensory brain areas. For example, zones that control hand movement were connected to ones that control arm movement and hand sensation,” explained Nicholas Card, lead author and bioengineering graduate student in the Swanson School of Engineering. “These types of connections are central to how the brain generates skilled movements. If you can understand what these connections are supposed to look like in a healthy subject, you can then identify the neural basis of disability.”

The most important advancement that ISOI brings is that it provides an accurate picture of brain network activity in living subjects. The same level of accuracy can be achieved with methods that require researchers to extract the brain of the animal they were studying and examine it through a microscope. In contrast, ISOI leaves the brain intact, which means that researchers can examine how networks operate in real life situations, like learning a new motor skill.

Another important feature of ISOI is that it relies on hemoglobin, which is in the blood of humans and animals alike. No tracers, dyes, or indicators are needed, making this tool versatile and fit for many species, including humans.

“We benchmarked the results from ISOI against gold standards in the field, including anatomical tracers, and microstimulation and imaging. We found remarkable correspondence between ISOI and the other methods,” said coauthor Omar Gharbawie, assistant professor of neurobiology with a secondary appointment in the Department of Bioengineering. “This is an exciting tool for examining brain connectivity in living animals, and it shows that spontaneous fluctuations can be reported with high accuracy for network organization. Our findings also show that the brain reveals its architecture in granular detail, even when it is just idling at rest”

The paper, “Cortical connectivity is embedded in resting state at columnar resolution,” (DOI: 10.1016/j.pneurobio.2022.102263) was published in the journal Progress in Neurobiology.

Cortical connectivity is embedded in resting state at columnar resolution