Roads and other forms of human linear infrastructure are a major source of direct mortality for wildlife. They present substantial threats to global ecosystems through collisions with vehicles and bisection of habitats, causing isolation of animal populations on either side. Such isolation can lead to the loss of access to important resources such as food, shelter and mates and eventually to substantial species decline. The impacts on terrestrial mammals are profound, but in many parts of the world, many species are partially or entirely arboreal or tree-living, and their aversion to coming down to the ground makes the impact of roads even more pronounced. 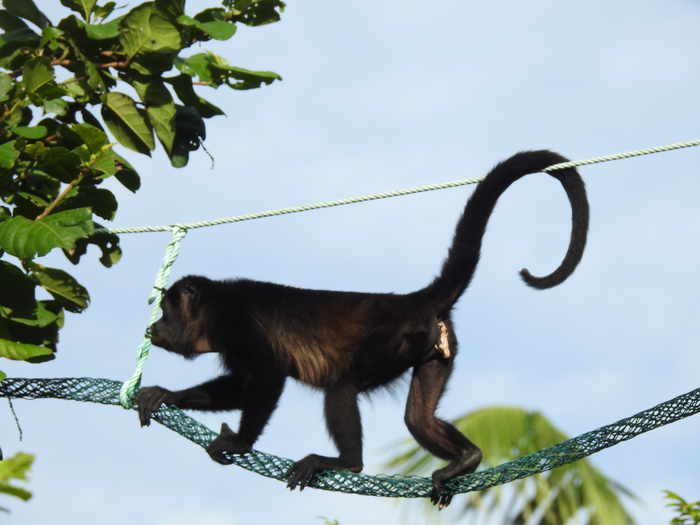 Roads and other forms of human linear infrastructure are a major source of direct mortality for wildlife. They present substantial threats to global ecosystems through collisions with vehicles and bisection of habitats, causing isolation of animal populations on either side. Such isolation can lead to the loss of access to important resources such as food, shelter and mates and eventually to substantial species decline. The impacts on terrestrial mammals are profound, but in many parts of the world, many species are partially or entirely arboreal or tree-living, and their aversion to coming down to the ground makes the impact of roads even more pronounced.

Canopy bridges — artificial and natural crossing structures over linear infrastructure — are increasingly implemented by scientists and conservation practitioners to help solve this habitat fragmentation problem. The 23 peer-reviewed case studies on research in 14 countries included in the December issue of Folia Primatologica illustrate the increasing sophistication of canopy bridge research with growing interest by researchers in testing innovative designs and monitoring methods. This new body of literature will substantially contribute to the understanding of canopy bridges, including species’ use of different designs, involved costs and materials. These improvements and the transfer of knowledge between research teams will allow the implementation of canopy bridges to be scaled up globally and the challenge of a growing road network to have mitigation solutions for arboreal species.

“Designing and implementing bridges animals will use can be extremely challenging. As the global road system explodes, it is perfect timing for conservationists and practitioners to learn from each other to more efficiently implement solutions that work.” – Tremaine Gregory, lead editor, co-author of three publications and conservation ecologist at the Smithsonian’s National Zoo and Conservation Biology Institute

“This special issue features new insights from researchers and practitioners from all around the globe that can guide important changes toward arboreal species conservation. This range of information is a relevant advance for science and for managing road development in a way that is more sustainable for wildlife.” – Fernanda Abra, co-editor, co-author of two publications and postdoctoral fellow in the Smithsonian’s National Zoo and Conservation Biology Institute

Abstract: In March 2021, as the COVID-19 pandemic raged, two of us decided to organise a virtual symposium on canopy bridges for the American Society of Primatology and Smithsonian’s Earth Optimism initiative. Afterall, canopy bridges are a conservation solution that invites optimism in the face of all the challenges confronting the natural world. We were astounded by the response to the symposium – we received 540 registration requests from 53 countries, and the seminar itself was a major success, with 130 live attendees (see link to recording on the ASP website: https://www.asp.org/asp-conservation/conservation-videos/). Following that experience, we could tell that interest in the topic of canopy bridges was growing, and we therefore invited our seminar speakers and others – together representing research on five continents – to join us in developing a special issue on the topic for Folia Primatologica. We had the sense that there were many studies waiting to be written, given the discrepancy between the number of studies we had heard of and the number of publications in the scientific literature. At the time of this writing, there were only 32 peer-reviewed papers on bridges worldwide, with another 15 in the grey literature. Once again, we were surprised and excited to have a whopping 33 research teams submit proposals for special issue submissions, with 23 of them submitting and finally publishing their full manuscripts in this issue. These 23 additions represent research from 14 countries and five continents and a 72% increase in the number of peer-reviewed publications on this topic.

Abstract: Canopy bridges are an increasingly popular method to mitigate linear infrastructure fragmentation impacts, but little is known about when, over the course of the day and night, they are used. Natural canopy bridges monitored with camera traps provide an excellent source of information on community-wide arboreal mammal activity patterns, which are otherwise challenging to document. Natural bridges represent a hotspot of activity, being bottleneck crossing points over linear infrastructure, and cameras provide 24-hour monitoring capability. We monitored 20 natural canopy bridges over pipeline clearings distributed at two sites in the Peruvian Amazon for over a year using camera traps. Across 11 492 camera trap nights, we recorded 5165 events of 27 arboreal mammal species and used these events to describe both overall mammal activity in natural canopy bridges and activity patterns for the most frequently registered species: Aotus nigriceps, Potos flavus, Bassaricyon alleni, Caluromys lanatus, Coendou ichillus, and Sapajus apella. The long duration of our study allowed us to investigate potential changes in activity patterns resulting from seasonality and disturbance associated with pipeline construction, and the inclusion of two study sites allowed comparisons between them. We found substantially more mammalian activity in bridges during the night (87.4%) than the day, with only one of the most frequently registered species being diurnal (S. apella). Changes in activity between disturbance phases and seasons were only apparent for C. ichillus, and comparisons across species revealed differences in activity peaks, such as a unique peak early in the night for A. nigriceps. Our data provide some of the first substantial activity information for the species evaluated and help elucidate temporal patterns of canopy bridge usage to be expected for arboreal Neotropical wildlife. Knowing when to expect bridge use helps both guide the
design of mitigation plans for future projects that include natural and artificial canopy bridges and identify the best monitoring methods. Given the high rate of nocturnal activity we observed, we recommend mitigation plans consider limiting human activity on linear infrastructure at night, if possible, and consider the requirements of nocturnal species in bridge designs. We also recommend camera trapping for monitoring.

Abstract: Increasing levels of anthropogenic modification, degradation, and fragmentation of arboreal mammal habitats substantially influence wildlife movement and behavior. In Costa Rica, there has been a surge in infrastructure development in the past decade. This infrastructure puts wildlife at high risk of mortality from electrocution, vehicle collisions, falls, and attacks by domestic animals. To prevent and mitigate the mortality of arboreal animals, canopy bridges have been implemented in several parts of the country. In Playa Hermosa, Guanacaste, a coastal community, we implemented a canopy bridge project for mantled howler monkeys (Alouatta palliata palliata). For the first year of our study (2015-2016), we performed monthly three-day censuses and follows of all howler monkey groups. After the first five months of data collection, we identified 20 high-use arboreal pathways that would benefit from reinforcement with canopy bridges and installed camera traps in the pathways to verify their use outside of sampling periods. After use was verified, we installed canopy bridges at those 20 sites. We continued to identify high-use paths via group follows, ad libitum sightings from community members, and annual group censuses between 2018 and 2021 and installed an additional 91bridges (N = 111 total). We also developed a system for community reporting of howler monkey injuries and fatalities and advocated for better insulation of electric cables, with 8341 m insulated between 2015 and 2021. Between 2015 and 2021, we saw the number of monkey groups grow from five to seven, group home ranges grow, the population grow from 59 to 99, and fatalities decrease from five to one annually. We conclude that the bridges likely contribute to howler monkey population growth via decreased fatalities and safer access to feeding resources and mates. Costa Rica is currently adopting legislation to make connectivity mitigation measures for wildlife mandatory in infrastructure development, making it a global leader.

Abstract: Brazil is known as a high biodiversity country, but at the same time, it has an extensive road network that threatens its wildlife and ecosystems. The impacts of roads and railways on vertebrates have been documented extensively, and the discussion concerning the implementation of mitigation measures for terrestrial wildlife has increased in the last decade. Arboreal animals are especially affected by the direct loss of individuals due to animal-vehicle collisions and by the barrier effect, because most arboreal species, especially the strictly arboreal ones, avoid going down to the ground to move across the landscape. Here we summarize and review information on existing canopy bridges across Brazil, considering artificial and natural canopy bridge initiatives implemented mainly on road and railway projects. A total of 151 canopy bridges were identified across the country, 112 of which are human-made structures of different materials, while the remaining 39 are natural canopy bridges. We found canopy bridges in three of the six biomes, with higher numbers in the Atlantic Forest and Amazon, the most forested biomes. Most of the canopy bridges are in protected areas (76%) and primates are the most common target taxa for canopy bridge implementation. Our study is the first biogeographic mapping and review of canopy bridges for arboreal wildlife conservation in a megadiverse country. We synthesize the available knowledge concerning canopy bridges in Brazil and highlight gaps that should be addressed by future research and monitoring projects.