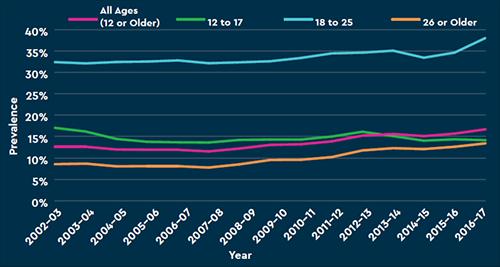 Nearly twelve years ago, Michigan voters approved the use of medical cannabis by residents with certain health conditions. A year and a half ago, they voted to approve its use by all adults, for any reason.

What happened between those two dates is the focus of a comprehensive new report just issued by the University of Michigan Injury Prevention Center.

The report documents everything from who’s using cannabis in the state for medical and recreational purposes, to downstream effects including motor vehicle crashes, emergency department visits and criminal justice cases. It aims to provide a baseline for future studies on the impact of state-level recreational cannabis legalization that occurred in late 2018, and to inform future policies and public health messaging.

The report, available at http://michmed.org/cannabisreport, includes a wide range of findings compiled from original research and official sources.

To compile the report, a team headed by Injury Prevention Center faculty Kipling Bohnert, Ph.D. and Erin Bonar, Ph.D., worked with two state agencies — the Michigan Department of Health and Human Services and the Michigan Department of Licensing and Regulatory Affairs — and the federal Michigan High Intensity Drug Trafficking Area coalition. The report was funded by the IPC’s core funding from the Centers for Disease Control and Prevention.

The researchers also note key areas where more data needs to be generated and shared, including broader biological testing for cannabis among drivers in motor vehicle crashes, additional study of vaping of substances derived from cannabis, workplace issues, societal costs and access to cannabis use disorder treatment.

Members of the project team are also members of the U-M Department of Psychiatry’s Addiction Center, the U-M Institute for Healthcare Policy and Innovation and the VA Center for Clinical Management Research.

The authors will hold a Twitter chat about the report on June 24 from 2 p.m. to 3 p.m. ET, using the hashtag #MiMJReport and the Injury Prevention Center’s Twitter handle, @UMInjuryCenter.

Questions about the report, and questions for the Twitter chat, may be sent to [email protected]