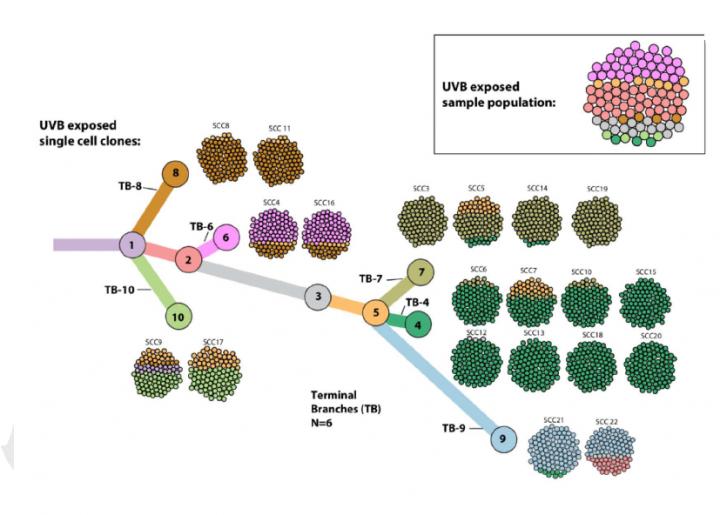 Diversity – at least among cancer cells – is not a good thing. Weizmann Institute of Science research shows that in melanoma, tumors with cells that have differentiated into more diverse subtypes are less likely to be affected by the immune system, thus reducing the chance that immunotherapy will be effective. The findings of this research, which were published today in Cell, may provide better tools for designing personalized protocols for cancer patients, as well as pointing toward new avenues of research into anti-cancer vaccines.

Prof. Yardena Samuels of the Institute’s Molecular Cell Biology Department wanted to know why, despite the fact that cancer deaths from melanoma have dropped in recent years thanks to new immunotherapy treatments, many patients do not respond to the therapy. The reasons for this have not been clear, though the leading hypothesis, supported by a few studies, has been that tumors with more mutations – a higher “tumor mutational burden” — are more likely to respond to immunotherapy. Some patients even spend large sums to undergo radiation or chemical treatments to increase tumor mutations, but a causal relationship between the two has not yet been proven. Samuels and her colleagues were intrigued by studies that had suggested a different possible correlation – that between heterogeneity (that is, the genetic diversity among tumor cells) and the response to therapy. To investigate this theory, however, the team had to develop a new experimental system to check exactly which factors play a role.

In the study, which was led by Drs. Yochai Wolf and Osnat Bartok in Samuels’ lab, the researchers took mouse melanoma cells and exposed them to a type of UV light known to promote this cancer. This increased both the mutations and the cell heterogeneity in the growth. When they injected mice with either these cells or the regular melanoma cells, the irradiated ones multiplied faster and were more aggressive. Despite the fact that these cells had a higher mutational burden – and thus should have been more responsive to immunotherapy – they actually were less likely to be eradicated than those from the original tumor. In other words, although there was a high mutational burden, there was also high heterogeneity, and the researchers hypothesized that the latter was driving the resistance.

Since mutational burden and heterogeneity generally go hand in hand, the researchers needed to find a way to study one without the other. They removed single cells from a culture of an aggressive cancer growth and then grew new cultures from each cell. Thus, they ended up with 22 new cultures, each with a low level of heterogeneity but carrying some random number of mutations.

When they injected these cells into mice, the researchers were surprised to find that all the tumors grew slowly, and even disappeared without immunotherapy – in those with higher and lower mutational burdens alike. To see if the mice’s immune systems were, indeed, responsible for killing the cancer cells, they repeated the experiment in mice with weakened immune systems. In these, the cancer spread rapidly.

To further understand the immune response, the researchers tried the experiment again, this time on mice specifically engineered to lack T cells – the immune cells that are known to fight cancer. “The results were similar to those in mice with weakened immune systems,” says Wolf. “When we look at T cells from different tumors, we found much more activity in the homogenous growths, and less in the heterogeneous ones.” In fact, the researchers found that in the homogeneous growths, T cells had penetrated to the center of the tumor, while in the heterogeneous ones, they remained on the outside, and there were more T cells of a different type – ones that suppress immune activity.

“We showed the difference between two extremes – highly homogeneous and highly heterogeneous,” says Bartok, “but most cancers fall somewhere in between. To systematically generate tumors with intermediate levels of genetic heterogeneity, we created a phylogenetic tree of the parental heterogeneous line, and mapped out how subtypes appear over time. Then we created “cocktails” of homogeneous cell lines based on this tree, with more or less heterogeneous combinations of cells, and injected them into mice.” As predicted, the more homogeneous the cell cocktail, the easier it was for the mice’s immune systems to eradicate the cancer, whereas the more heterogeneous the tumors were, the more aggressive they became.

“We found that testing the number of cell subtypes and their place on the phylogenetic tree are a much better predictor than mutational burden of the success of immunotherapy,” says Samuels. “We also went over data from melanoma patients who had undergone immunotherapy, and found a high correlation between these factors and the success of the treatment. Ultimately, we intend to use the experimental system we created to work on developing applicable personalized protocols for cancer patients.”

Also participating in this research were Prof. Eytan Ruppin of the National Cancer Institute of the National Institutes of Health (NIH) of the US, Prof. Lea Eisenbach of the Institute’s Immunology Department, Dr. Yishai Levin of the Nancy and Stephen Grand Israel National Center for Personalized Medicine at the Institute, Prof. Martin Miller of the University of Cambridge, Prof. Eli Pikarsky of Hebrew University-Hadassah Medical School, Prof Arie Admon of the Technion -Israel Institute of Technology and Prof. Charles Swanton of University College London.

Prof. Yardena Samuels research is supported by the EKARD Institute for Cancer Diagnosis Research; the Weizmann-Brazil Tumor Bank; the Laboratory in the name of M.E.H Fund established by Margot and Ernst Hamburger; the Wagner-Braunsberg Family Melanoma Research Fund; the Jean-Jacques Brunschwig Fund for the Molecular Genetics of Cancer; the Comisaroff Family Trust; the Rising Tide Foundation; the Fundación Ramón Areces; the Meyer Henri Cancer Endowment; Ted and Sylvia Quint; Jean Jacques Roboh; and the European Research Council. Prof. Samuels is the incumbent of the Knell Family Professorial Chair.

The Weizmann Institute of Science in Rehovot, Israel, is one of the world’s top-ranking multidisciplinary research institutions. Noted for its wide-ranging exploration of the natural and exact sciences, the Institute is home to scientists, students, technicians and supporting staff. Institute research efforts include the search for new ways of fighting disease and hunger, examining leading questions in mathematics and computer science, probing the physics of matter and the universe, creating novel materials and developing new strategies for protecting the environment.

Is theory on Earth’s climate in the last 15 million years wrong?