Can cosmic inflation be ruled out?

Astrophysicists say that cosmic inflation – a point in the Universe’s infancy when space-time expanded exponentially, and what physicists really refer to when they talk about the ‘Big Bang’ – can in principle be ruled out in an assumption-free way. 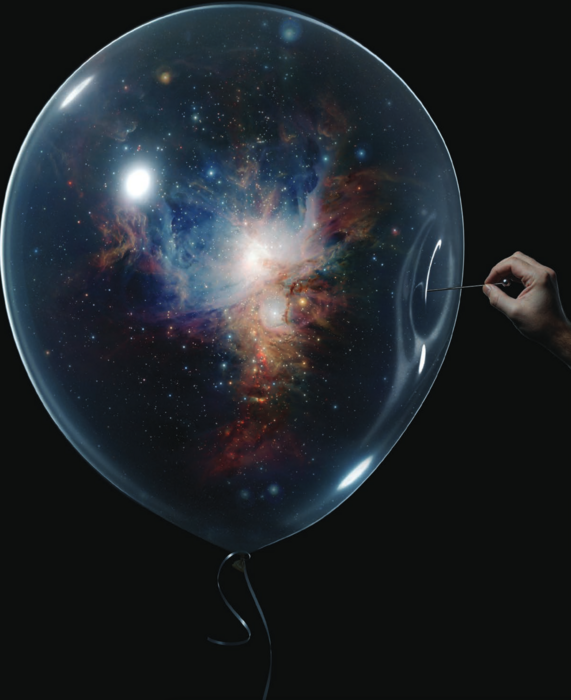 Astrophysicists say that cosmic inflation – a point in the Universe’s infancy when space-time expanded exponentially, and what physicists really refer to when they talk about the ‘Big Bang’ – can in principle be ruled out in an assumption-free way.

The astrophysicists, from the University of Cambridge, the University of Trento, and Harvard University, say that there is a clear, unambiguous signal in the cosmos which could eliminate inflation as a possibility. Their paper, published in The Astrophysical Journal Letters, argues that this signal – known as the cosmic graviton background (CGB) – can feasibly be detected, although it will be a massive technical and scientific challenge.

“Inflation was theorised to explain various fine-tuning challenges of the so-called hot Big Bang model,” said the paper’s first author Dr Sunny Vagnozzi, from Cambridge’s Kavli Institute for Cosmology, and is now based at the University of Trento. “It also explains the origin of structure in our Universe as a result of quantum fluctuations.

Some scientists raised concerns about cosmic inflation in 2013, when the Planck satellite released its first measurements of the cosmic microwave background (CMB), the universe’s oldest light.

“When the results from the Planck satellite were announced, they were held up as a confirmation of cosmic inflation,” said Professor Avi Loeb from Harvard University, Vagnozzi’s co-author on the current paper. “However, some of us argued that the results might be showing just the opposite.”

Along with Anna Ijjas and Paul Steinhardt, Loeb was one of those who argued that results from Planck showed that inflation posed more puzzles than it solved, and that it was time to consider new ideas about the beginnings of the universe, which, for instance. may have begun not with a bang but with a bounce from a previously contracting cosmos.

The maps of the CMB released by Planck represent the earliest time in the universe we can ‘see’, 100 million years before the first stars formed. We cannot see farther.

“The actual edge of the observable universe is at the distance that any signal could have travelled at the speed-of-light limit over the 13.8 billion years that elapsed since the birth of the Universe,” said Loeb. “As a result of the expansion of the universe, this edge is currently located 46.5 billion light years away. The spherical volume within this boundary is like an archaeological dig centred on us: the deeper we probe into it, the earlier is the layer of cosmic history that we uncover, all the way back to the Big Bang which represents our ultimate horizon. What lies beyond the horizon is unknown.”

In could be possible to dig even further into the universe’s beginnings by studying near-weightless particles known as neutrinos, which are the most abundant particles that have mass in the universe. The Universe allows neutrinos to travel freely without scattering from approximately a second after the Big Bang, when the temperature was ten billion degrees. “The present-day universe must be filled with relic neutrinos from that time,” said Vagnozzi.

Vagnozzi and Loeb say we can go even further back, however, by tracing gravitons, particles which mediate the force of gravity.

“The Universe was transparent to gravitons all the way back to the earliest instant traced by known physics, the Planck time: 10 to the power of -43 seconds, when the temperature was the highest conceivable: 10 to the power of 32 degrees,” said Loeb. “A proper understanding of what came before that requires a predictive theory of quantum gravity, which we do not possess.”

Vagnozzi and Loeb say that once the Universe allowed gravitons to travel freely without scattering, a relic background of thermal gravitational radiation with a temperature of slightly less than one degree above absolute zero should have been generated: the cosmic graviton background (CGB).

However, the Big Bang theory does not allow for the existence of the CGB, as it suggests that the exponential inflation of the newborn universe diluted relics such as the CGB to a point that they are undetectable. This can be turned into a test: if the CGB were detected, clearly this would rule out cosmic inflation, which does not allow for its existence.

Vagnozzi and Loeb argue that such a test is possible, and the CGB could in principle be detected in future. The CGB adds to the cosmic radiation budget, which otherwise includes microwave and neutrino backgrounds. It therefore affects the cosmic expansion rate of the early Universe at a level that is detectable by next-generation cosmological probes, which could provide the first indirect detection of the CGB.

However, to claim a definitive detection of the CGB, the ‘smoking gun’ would be the detection of a background of high-frequency gravitational waves peaking at frequencies around 100 GHz. This would be very hard to detect, and would require tremendous technological advances in gyrotron and superconducting magnets technology. Nevertheless, say the researchers, this signal may be within our reach in future.

The Challenge of Ruling Out Inflation via the Primordial Graviton Background