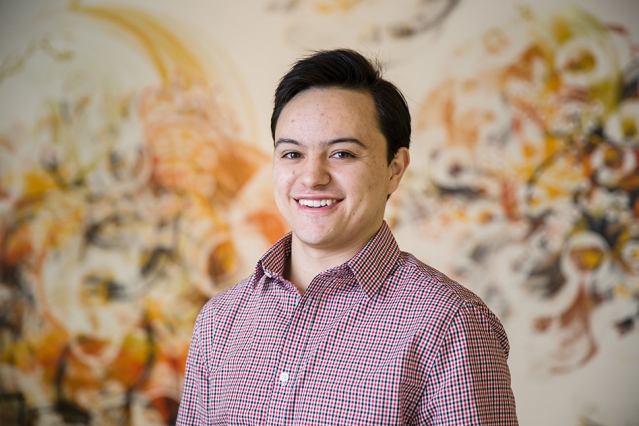 Camilo Ruiz, an MIT senior majoring in biological engineering, is one of 35 American students to be awarded this year’s competitive Gates Cambridge Scholarship. Ruiz will pursue an MPhil in Advanced Computer Science at Cambridge University in England. He ultimately plans to return to the United States for further graduate studies in biological engineering, with the goal of creating new and affordable treatments for disease.

Born in Colombia, Ruiz and his family fled political violence to settle in the United States. His early experiences of turmoil helped shape Ruiz’s deep commitment to making transformative and sustainable contributions to society. By the time he was a senior in high school, Ruiz was well on his way to applying his scientific talents to medical devices and had collaborated on the design of a prize-winning pacemaker.

As an underclassman at MIT, Ruiz undertook an internship at the DNA Medicine Institute, a biomedical company in Cambridge, Massachusetts. There, he helped develop an innovative portable blood diagnostic device, which later won the $500,000 grand prize in the Nokia XChallenge Competition.

Ruiz has spent the past several years working in the laboratory of Professor Robert Langer in the Koch Institute for Integrative Cancer Research. Here, Ruiz helped develop a device that was named one of the Top 10 World Changing Ideas of 2014 by Scientific American and is now used by many labs and companies. More recently, he has conducted research in the bioengineering laboratory of Professor James Collins.

At MIT, Ruiz has actively developed his leadership skills. First, he led his fraternity as a recruitment director. More recently, he led a team of 22 MIT seniors to fully design, build, and launch a product that makes public restrooms more hygienic. Ruiz has also been active in Camp Kesem, a free summer camp for children of cancer patients, where he has served as both an operations coordinator and a counselor.

Established by the Bill and Melinda Gates Foundation in 2000, the Gates Cambridge Scholarship provides full funding for talented students from outside the United Kingdom to pursue postgraduate study in any subject at Cambridge University.