Which lands stand the best chance for conservation and wildfire restoration? 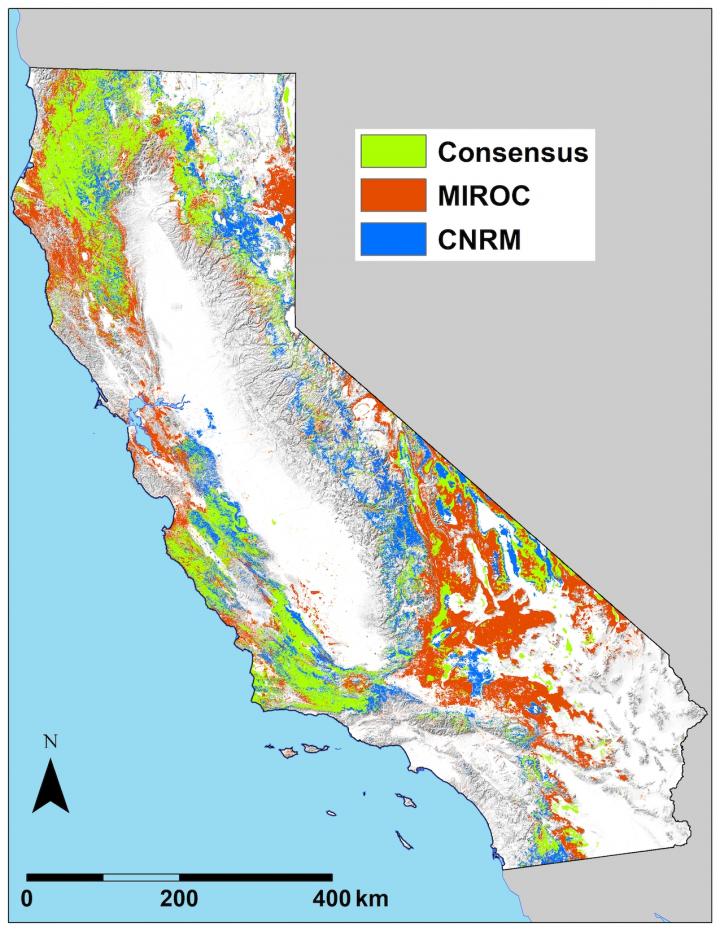 Some landscapes can hold their own against climate change better than others.A studyfrom the University of California, Davis, maps these places, called “climate refugia,” where existing vegetation is most likely to buffer the impacts of climate change through the end of the century.

It found that about 15 percent of natural lands in California serve as climate refugia for the state’s plants, including trees, shrubs, annuals and perennials. The mapping tool can help natural resource managers prioritize and plan climate-adaptive management efforts, such as wildlife habitat conservation and post-wildfire restoration.

The study is published in a special issue of the journal Frontiers in Ecology and Evolution devoted to the theme of climate refugia. The issue and an accompanyingwebsite, climaterefugia.org,include other refugia related to fish and wildlife, rivers and wetlands, mountains and forests.

THE SLOW LANE FOR CLIMATE CHANGE

As climate change intensifies, identifying and mapping areas of relative stability — what the journal calls the “slow lane” for climate change — marks a path toward conserving them and the habitat and services they provide to wildlife and humans.

“This paper shows that there are places where, if you retain what’s standing there now, it would have a better chance of remaining for a longer period of time — like a century — under wetter and drier conditions,” said lead author James Thorne, a research scientist with the UC Davis Department of Environmental Science and Policy.

SO WHERE ARE THESE PLACES?

Vegetation with the largest portions (more than 50 percent) of their extent in climate refugia include montane chaparral and Klamath mixed conifer forests. A quarter of existing Douglas fir also occurs in consensus refugia.

POCKETS OF REFUGIA, WINDOWS OF OPPORTUNITY

If only 15 percent of California’s natural lands have climate refugia characteristics for both a wetter and drier future, what does that mean for the remaining 85 percent? Thorne explains that it doesn’t mean all other plants and trees will be outright destroyed. But they will likely face a higher level of climate stress than vegetation in refugia. Stress can affect rates of regeneration, reproduction and resilience under warming temperatures, drought, flood and fire.

Previous work by Thorne modeled climate risk to California’s native vegetation under various emissions-saving scenarios and found that half the state’s native vegetation is at risk for climatic stress. This new paper assumes a business-as-usual climate scenario under which greenhouse gas emissions continue their current trajectory.

“California is one of the biodiversity hot spots of the world,” Thorne said. “Our natural ecosystems help to support all of the people in the state as well as this incredible range of species. My hope is that we start to be proactive in our management of landscapes, understanding that climate change is going to bring impacts and that we have to change how we address them.”

The study’s co-authors include Melanie Gogol-Prokurat and Sandra Hill of the California Department of Fish and Wildlife, Dana Walsh of the USDA Forest Service, Ryan Boynton of UC Davis, and Hyeyeong Choe of Kangwon National University.

Publication of the special issue that includes this study was funded by the U.S. Department of the Interior National, Northeast and Northwest Climate Adaptation Science Centers.