A new therapeutic approach prevents the growth of metastatic tumors in mice by forcing cancer cells into a dormant state in which they are unable to proliferate. The study, published November 23 in the Journal of Experimental Medicine (JEM), could lead to new treatments that prevent the recurrence or spread of various cancer types, including breast cancer and head and neck squamous cell carcinoma (HNSCC). 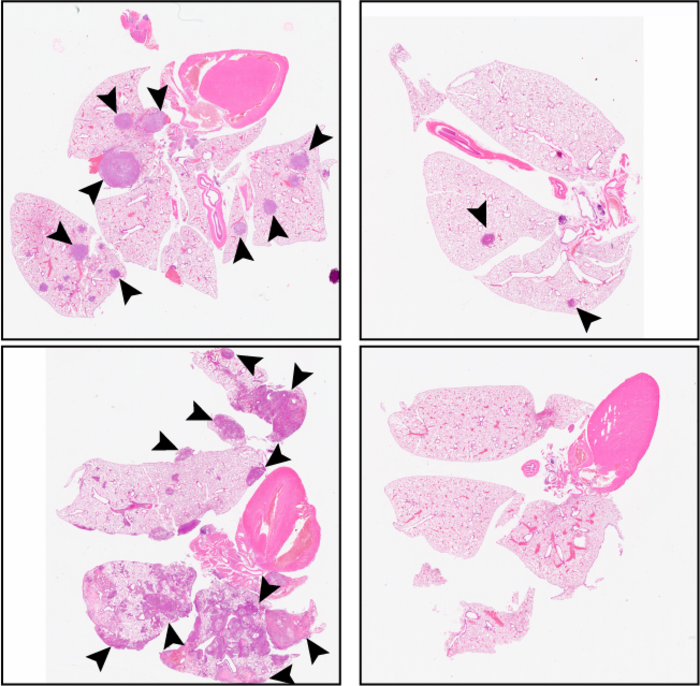 A new therapeutic approach prevents the growth of metastatic tumors in mice by forcing cancer cells into a dormant state in which they are unable to proliferate. The study, published November 23 in the Journal of Experimental Medicine (JEM), could lead to new treatments that prevent the recurrence or spread of various cancer types, including breast cancer and head and neck squamous cell carcinoma (HNSCC).

Many cancer patients relapse, often years or decades after their initial treatment, and develop new tumors that regrow in the same location or metastasize (spread) to other parts of the body. These secondary tumors are often resistant to treatment and are produced by individual tumor cells that may remain dormant for long periods before being reactivated to start proliferating again. Patient relapse might therefore be prevented if researchers could find a way to keep remaining cancer cells in a dormant state.

In a previous study, Maria Soledad Sosa from the Icahn School of Medicine at Mount Sinai and Julio A. Aguirre-Ghiso, now at Albert Einstein College of Medicine, discovered that the ability of cancer cells to remain dormant is controlled by a protein called NR2F1. This receptor protein can enter the cell nucleus and turn numerous genes on or off to activate a program that prevents the cancer cells from proliferating. NR2F1 levels are usually low in primary tumors but are elevated in dormant disseminated cancer cells. Levels of the NR2F1 protein then decline once more when cancer cells start proliferating again and form recurrent or metastatic tumors.

“We therefore thought that activating NR2F1 using a small molecule could be an attractive clinical strategy to induce cancer cell dormancy and prevent recurrence and metastasis,” Aguirre-Ghiso explains.

In the new JEM study, Sosa and Aguirre-Ghiso’s teams used a computer-based screening approach to identify a drug, named C26, that activates NR2F1. The researchers found that treating patient-derived HNSCC cells with C26 boosted the levels of NR2F1 and arrested cell proliferation.

The researchers then tested whether C26 would prevent metastasis in mice. Animals injected with patient-derived HNSCC cells typically form large primary tumors that spread to the lungs after the original tumor is surgically removed. Treatment with C26 reduced the size of primary tumors, and, after surgery, further doses of C26 completely blocked the growth of metastatic tumors. Instead, the rodent’s lungs contained just a few dormant disseminated cancer cells unable to proliferate even after cessation of the treatment.

Sosa and Aguirre-Ghiso’s teams determined that, by activating NR2F1, C26 forces cancer cells into a long-lived state of dormancy characterized by a unique pattern of gene activity. Cancer patients whose tumors display a similar pattern of gene activity tend to go longer without relapsing, suggesting that inducing this dormancy program with C26-type drugs could be effective in humans.

“Drugs that activate NR2F1 might be particularly useful in breast cancer,” says Sosa. “NR2F1 is highly enriched in ER-positive tumors when compared to ER-negative tumors, and activating NR2F1 might be able to suppress reawakening of dormant cancer cells kept in that state by anti-estrogen therapies.” However, because C26 treatment elevates the levels of ­NR2F1, the approach may also be useful for other cancers with inherently low levels of the receptor protein.

About Journal of Experimental Medicine

Journal of Experimental Medicine (JEM) publishes peer-reviewed research on immunology, cancer biology, stem cell biology, microbial pathogenesis, vascular biology, and neurobiology. All editorial decisions on research manuscripts are made through collaborative consultation between professional scientific editors and the academic editorial board. Established in 1896, JEM is published by Rockefeller University Press, a department of The Rockefeller University in New York. For more information, visit jem.org.