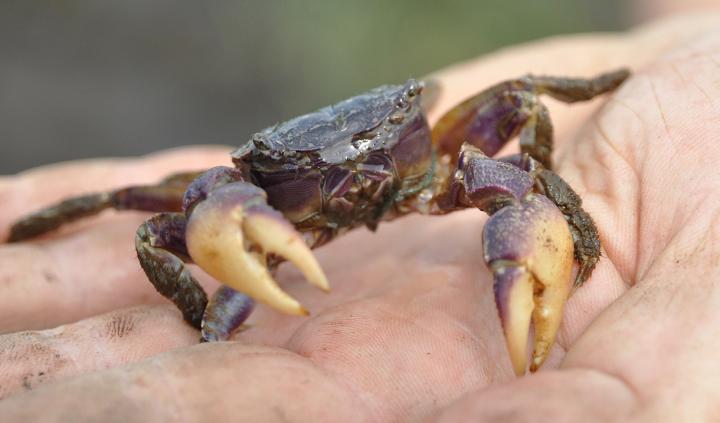 The study, published in Proceedings of the National Academy of Sciences, shows that soils beneath salt marshes from South Carolina to Florida have been softened by higher sea levels and increased tidal inundation. That softening has allowed the burrowing crab species Sesarma reticulatum to thrive, feeding on the cordgrass that holds the marshes together.

The clearing of grass by crabs has dramatically altered the flow of creeks that run through the marshes, the study found, and is altering the dynamics between predator and prey species in the marshes. In fact, the researchers say that Sesarma, which had previously been a minor player in southeastern salt marshes, can now be considered a keystone species, meaning it plays a dominant role in shaping the ecosystem.

“What we’ve found is an example of how sea level rise can activate a keystone species that’s now dramatically remodeling these salt marshes,” said Mark Bertness, a professor emeritus of ecology and evolutionary biology at Brown University and a coauthor of the research. “That’s a big deal because sea level rise is a pervasive global phenomenon, and this is a largely unexpected consequence. We need to start thinking about how global climate change could activate new keystone species in other ecosystems.”

Research on Sesarma crabs and their impact on salt marshes has a long history in Bertness’s lab at Brown. In 2011, Bertness and his students discovered that Sesarma, voracious grazers of cordgrass roots and leaves, were behind sudden die-offs of marshes on Cape Cod. In that case, overfishing had suddenly pulled predator species like striped bass out of the water, giving the crabs free reign to decimate the marshes. One of the undergraduate co-authors on that earlier research was Christini Angelini, now an associate professor at the University of Florida and a senior author on this new paper.

Sesarma were known to inhabit southern marshes in Florida and the Carolinas, but their populations hadn’t boomed like those further north. One potential reason for that was differing soil substrates. While working several years ago as an undergraduate researcher in Bertness’ lab, Sinead Crotty, now project director at Yale’s Carbon Containment Lab, showed that ground hardness played a big role in where Sesarma are able to establish themselves. Her findings indicated that Sesarma had a much easier time building burrows and feeding on grass roots in the peaty New England soil compared to harder soil substrates often found in southern marshes.

But as sea levels continue to rise due to climate change, Crotty, Angelini and Bertness wondered if softening soils might be giving Sesarma more of a foothold in the South. Looking at aerial photos from nine locations across South Carolina and Florida, they found that the number of marsh creeks with evidence of Sesarma grazing increased by up to 240% from the late 1990s to the late 2010s. Meanwhile, surveys of sea level rise show that the ground in these areas is tidally submerged up to an hour longer per day now compared to the late 1990s.

“You’ve got the sea level rising, which softens the substrate that these crabs usually can’t burrow in,” Bertness said. “Now that it’s softer you’ve got an ideal habitat to support these huge communal Sesarma burrows.”

This new Sesarma activity is reshaping marshes, the researchers found. Elimination of grasses has increased the rate at which creeks form in the marshes, and increases the drainage density of marsh creeks by up to 35%.

Sesarma activity is also influencing interactions between predators and prey in the creeks. Clearing of grasses provides predators increased access to shellfish and other prey species. The research found that populations of mussels were dramatically lower in Sesarma-grazed creeks compared to creeks that weren’t grazed.

“As they drown, southeastern U.S. marshes are fracturing from grasslands to patches of marsh, with depleted populations of mussels, snails and other invertebrates,” Angelini said. “These dynamics reveal how quickly marshes may disappear with accelerating sea level rise and how long they will remain foraging grounds for commercially, recreationally and ecologically important species.”

The fact that Sesarma is now altering the geomorphology of the marshes, as well as the ecological interactions between other species, is evidence that it now qualifies as a keystone species in southern marshes. This is the first example, the researchers say, of activation of new keystone species as the result of anthropogenic climate change.

“This is going to be something for the textbooks,” Bertness said. “This is an underappreciated way in which climate change alters ecosystems.”