Researchers measure readiness potential outside a laboratory for the first time 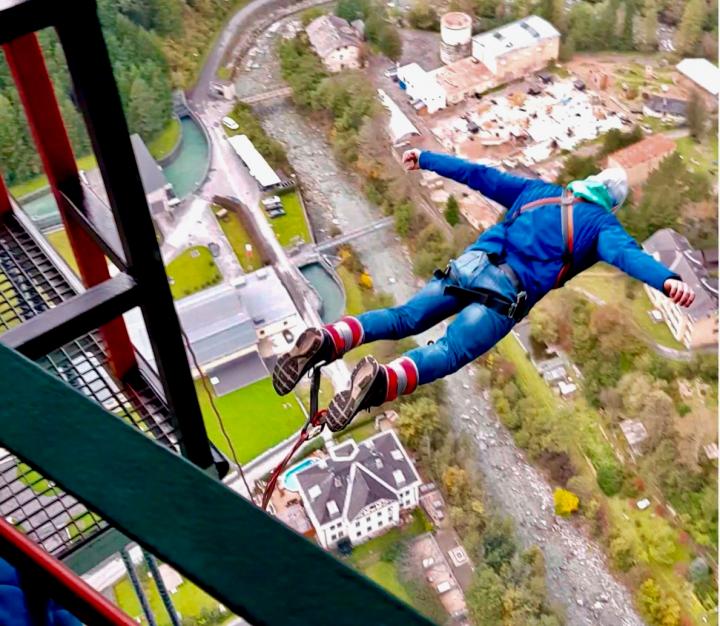 Immediately before a person decides to launch themselves off a bridge for a bungee jump, there is a measurable increase in their brain activity. This can be recorded nearly one second before the person makes the conscious decision to jump. Researchers from Charité – Universitätsmedizin Berlin have, for the first time, succeeded in measuring this ‘Bereitschaftspotential’ (readiness potential) outside a laboratory and under extreme conditions. Their findings will help advance the development of brain-computer interfaces, devices that can help quadriplegics control neuroprosthetics which allow them to regain the use of their hands. Results from this research have been published in Scientific Reports*.

What happens inside the brain of a person who, tied to a bungee rope, is just about to leap off a 192m high bridge? A team of researchers, led by Prof. Dr. Surjo Soekadar of Charité’s Department of Psychiatry and Psychotherapy, set out to answer this question using an extraordinary experiment. The researchers asked two research participants to take a total of 30 jumps from the 192m high Europa Bridge near Innsbruck in Austria, each time recording their brain waves. They were able to demonstrate that brain activity measurements are feasible even in emotionally charged real-life situations – such as, in this case, a bungee jump. For the first time, the researchers succeeded in recording the readiness potential outside of a laboratory and demonstrated the effect of extreme emotions.

The readiness potential is a shift in electrical voltage in the brain, which can be measured using electroencephalography (EEG) electrodes placed along the scalp. It indicates that a voluntary act – such as a hand movement – is imminent, and it is caused even before the person becomes aware of their conscious decision to execute this movement. The phenomenon was discovered in 1964, when Lüder Deecke and Hans-Helmut Kornhuber studied the brain activity of test subjects during hundreds of finger movements.

“Measuring this electrical potential is extremely tricky even under laboratory conditions, since the voltage shift involved is in the range of only a few millionths of a volt. However, to advance the development of brain-computer interfaces that are suitable for everyday use, we wanted to study whether the readiness potential could be measured in real-life scenarios,” reports Prof. Soekadar. It only took a few jumps for the researchers to collect the necessary evidence to prove this. They also found that brain activity patterns recorded during jumps from a height of 192 meters did not differ from those recorded during jumps from a height of just 1 meter. The two test subjects also completed a total of 30 jumps from a height of 1 meter. This result means that the fear experienced prior to undertaking a potentially life-threatening action does not influence the nature of the readiness potential itself.

This study provides a strong basis on which to advance the development of brain-computer interfaces. These devices translate brain activity into control commands for robots or other technological devices and can even enable quadriplegic patients to eat without assistance. The brain activity produced by the intention to execute a grasping motion can thus trigger this movement in an electromechanical support structure which is attached to the paralyzed hand. For such neuroprostheses to be suitable for use in everyday situations, it is extremely important that strong emotions do not adversely affect a person’s ability to control them. “Our results suggest that brain-computer interfaces can remain reliable even when used under extreme emotional stress,” explains Prof. Soekadar. He and his team will use their findings to inform a new study, which will see such support structures being used by both paraplegics and patients with stroke.

Prof. Dr. Surjo Soekadar was appointed Einstein Professor for Clinical Neurotechnology at Charité in November 2018. The study reported here was conducted in early 2018, when he was Leader of the Applied Neurotechnology Laboratory at the University Hospital of Tübingen’s Department of Psychiatry and Psychotherapy.

Zips on the nanoscale

Gene regulation behind the choice of the correct receptor for…