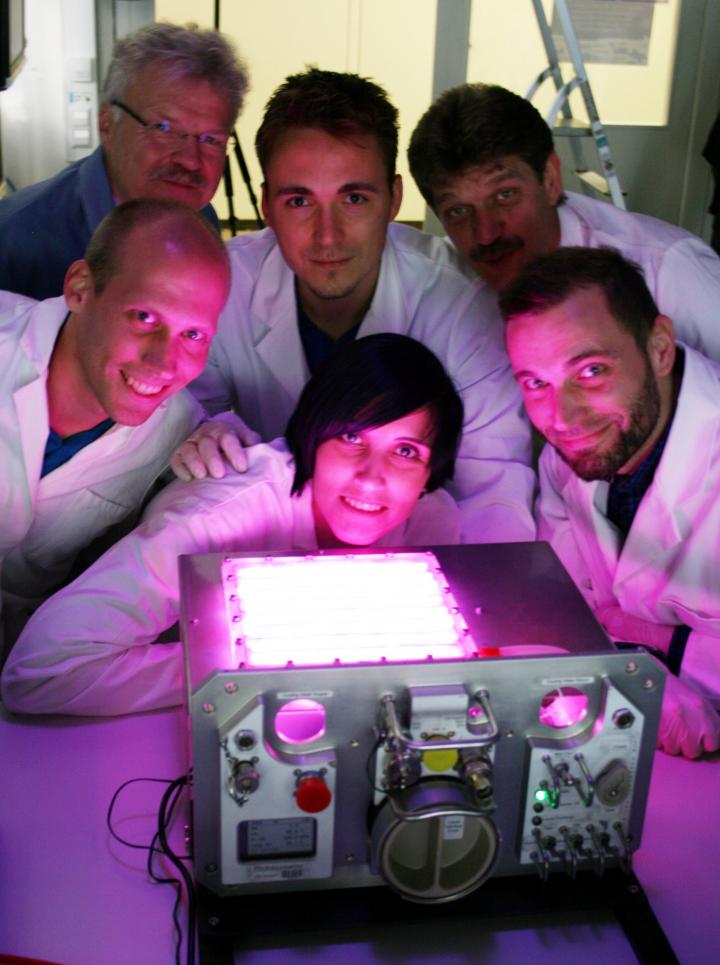 Astronauts on future long-duration spaceflight missions to the Moon and Mars could rely on microalgae to supply essentials including food, water and oxygen. A new investigation aboard the International Space Station tests using the microalgae Chlorella vulgaris as a biological component of a hybrid life support system (LSS).

As humans travel farther from Earth and for longer periods of time, bringing along sufficient supplies of food, water and oxygen becomes a challenge. Packing food that is nutritious and perhaps even tasty may prove harder still.

Current life support systems, such as the Life Support Rack (LSR), use physicochemical processes and chemical reactions to generate oxygen and water and remove carbon dioxide from the space station.

The Photobioreactor (PBR) investigation demonstrates creating a hybrid LSS by adding the biological processes of a microalgae, which has a photosynthetic efficiency up to ten times greater than more complex plants. These tiny plants could take concentrated carbon dioxide removed from the cabin atmosphere and use photosynthesis to produce oxygen and possibly even food for astronauts, according to Norbert Henn, a co-investigator and consultant at the Institute of Space Systems at University of Stuttgart.

The Institute of Space Systems began research on microalgae for space applications back in 2008 and started work on Photobioreactor in 2014, together with the German Aerospace Center (DLR) and Airbus.

“The use of biological systems in general gains importance for missions as the duration and the distance from Earth increase. To further reduce the dependency on resupply from Earth, as many resources as possible should be recycled on board,” said co-investigator Gisela Detrell.

Astronauts activate the system hardware aboard the space station and let the microalgae grow for 180 days. That span of time allows researchers to evaluate the stability and long-term performance of the Photobioreactor in space, as well as the growth behavior of the microalgae and its ability to recycle carbon dioxide and release oxygen, according to co-investigator Jochen Keppler. Investigators plan to analyze samples back on Earth to determine the effects of microgravity and space radiation on the microalgae cells.

“This is the first data from a flight-proven, long-term operation of a biological LSS component,” said Keppler. The algae’s resilience to space conditions has been widely demonstrated in small-scale cell culture, but this will be the first investigation to cultivate it in a PBR in space.

Chlorella, one of the most studied and widely characterized algae worldwide, is used in biofuels, animal feed, aquaculture, human nutrition, wastewater treatment and bio-fertilizer in agriculture.

“Chlorella biomass is a common food supplement and can contribute to a balanced diet thanks to its high content of protein, unsaturated fatty acids, and various vitamins, including B12,” said co-investigator and biotechnologist Harald Helisch at the Institute of Space Systems. As for the taste, he adds, “if you like sushi, you will love it.”

The long-term goal is to facilitate longer space missions by reducing total system mass and resupply dependency, said co-investigator Johannes Martin. “To achieve this, future areas of focus include downstream processing of the algae into edible food and scaling up the system to supply one astronaut with oxygen. We’ll also be working on interconnections with other subsystems of the LSS, such as the waste water treatment system, and transfer and adaption of the technology to a gravity-based system such as a lunar base.”

Astronauts still may have to pack their own wasabi.

Researchers capture first images of oxygen in cancer tumors during…