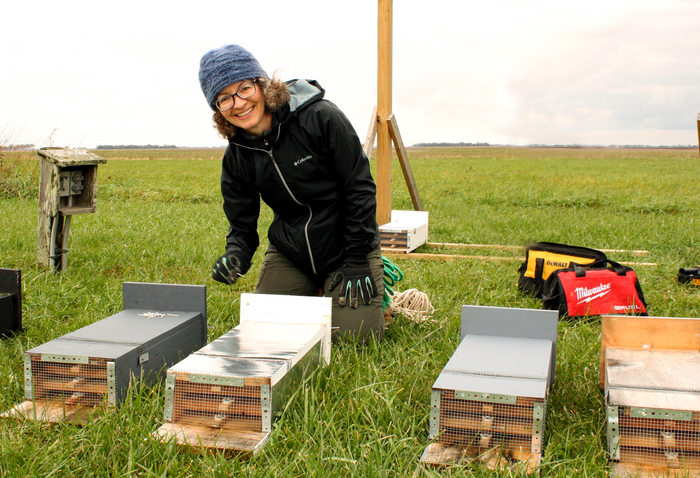 “Previous work made broad temperature comparisons among a hodgepodge of bat box designs, usually at only one spot inside the box. In those kinds of studies, it’s hard to know the full temperature gradient bats experience or which design elements are most important for maintaining optimal temperatures,” says Joy O’Keefe, an assistant professor and wildlife extension specialist in the Department of Natural Resources and Environmental Sciences at Illinois.

O’Keefe’s team custom-built 19 rocket boxes, including a standard design: a 1-meter long, four-sided box with two vertical chambers on each side. In each of the 18 variations, they added or took away vents; changed construction material, roof design, and overall length; and added various insulating jackets. They also built a standard three-chambered flat-front design as a 20th point of comparison.

In each box, the researchers positioned 12 temperature sensors at the top, middle, and bottom of the outer chamber on each side of the box.

“There are some studies that put a sensor in each of the chambers in a three-chamber box, or they put sensors at the top and the bottom of one design. But ours is top to bottom in all four cardinal directions, so it is really unique,” O’Keefe says.

The researchers set the boxes atop 16-foot posts along a gravel road in a woodland-agricultural landscape in Indiana. The new apartment complex in the neighborhood was probably the talk of the resident bat colony, but alas, bats were excluded from the boxes for the duration of the experiment, allowing the researchers to understand temperature gradients without the complication of body heat.

The team logged temperatures 24 hours per day, counting up times when temperatures were cool, permissive (comfortable), and stressful. They also measured external conditions, such as solar radiation and wind speed.

Over the course of the day, conditions changed dramatically inside the boxes.

“When a bat chooses a box near sunrise, they all pretty much look the same. They’re all cold. So the bats can’t really know what they’re getting into. Then, by the middle of the day, temperatures are starting to get comfortable. Everybody’s hunky dory. It’s the end of the day where you can get these deadly temperatures. We’ve seen temperatures in the bat boxes being 68 degrees Fahrenheit higher than the outside air temperature,” O’Keefe says.

Generally, the tops of the boxes were heating up more and faster than the middle and bottom portions. But because rocket boxes are long and four-sided, bats could theoretically move vertically or away from sun-blasted sides of the box. A longer box, like the 1.5-meter-long design tested in the experiment, would offer a greater range of temperatures.

Another winning design was a water jacket design dreamed up by co-author George Bakken, an emeritus professor at Indiana State University. This design had a layer of vacuum-sealed water bags inserted in a sleeve around the standard rocket box. The water acts as a buffer, effectively moderating daily temperature fluctuations and making it less likely for the box to reach extremely hot or cold temperatures.

This is especially important for young pups and lactating females who need to spend less energy warming themselves. It’s also crucial in spring, as bats emerge from hibernation. Often, they develop the devastating fungal disease white nose syndrome during their winter sleep and are in rough shape when they emerge for the season.

“If they could come out of hibernation and go to heated roosts, they would be better able to heal and wouldn’t have to spend as much energy trying to stay warm. But you can’t really put electricity out on the landscape to provide heated roosts for bats,” O’Keefe says. “That’s why we conceived the water jacket design.”

In the end, many of the boxes either reduced the risk of overheating or provided space for bats to move and avoid extreme temperatures. O’Keefe says there’s still a lot of experimentation to be done, especially with so-called thermal lag designs like the water jacket. But in the meantime, she maintains a website providing tips for making bat boxes safer for bats.