The immune system protects us from infections, harmful substances and problematic changes in our own cells. Traditional research posits that parts of invading pathogens or cells sound the alarm, but accumulating evidence suggests that the physical environment surrounding immune cells may also play an active role in the early recognition of danger and in the initiation of immune responses. 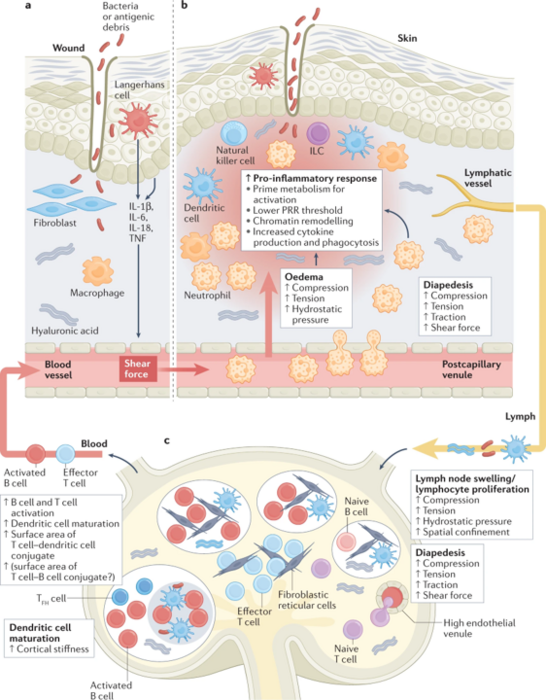 The immune system protects us from infections, harmful substances and problematic changes in our own cells. Traditional research posits that parts of invading pathogens or cells sound the alarm, but accumulating evidence suggests that the physical environment surrounding immune cells may also play an active role in the early recognition of danger and in the initiation of immune responses.

An entirely new perspective about how immune cells work is being investigated by the lab of Buck Associate Professor Dan Winer, MD. Through his own research, and extensive searches of existing publications on the topic, Winer realized that the effects of mechanical forces on the biology of immune cells was unmistakable, yet barely explored.

Winer collaborated with other experts to present a compelling argument that mechanical cues actually tune immune cell responses, which published on August 16 in Nature Reviews Immunology. These findings are part of a developing field, called “mechanoimmunology,” which provides a missing part of the puzzle to create an integrated picture of immunity. Recognizing that physical forces originating at the tissue level impact immune cell activation and function may provide new insights to treat a wide range of disorders.

“This review is putting together an emerging new theory about how the immune system senses danger by unifying both chemical and mechanical signals,” said Winer. “The identification of a new fundamental concept is going to have implications for many diseases and conditions, from autoimmunity to infections to chronic diseases associated with aging.”

The idea that the physical environment is important to a cell’s function might at first seem far-fetched, but it makes perfect sense, said Winer. All cells are subjected to a variety of forces in the body, he explained, such as tension, compression, hydrostatic pressure, stretching and shearing, depending on whether the cells are located within a tissue or are circulating in body fluids.

It is already well known that mechanical stimuli within tissues affect the cardiovascular and skeletal systems, and that mechanical changes in tissues occur during scarring and also with infections, injuries and cancer. What hasn’t been fully appreciated is that the same stimuli are orchestrating inflammation and immune responses.

For many years, Winer, whose research has long focused on how obesity alters the immune system, noticed that as fat tissue increases, so does fibrosis, which is thickened scar tissue. As the tissue gets stiffer, the mechanical cues that cells rely on to sense their environment change. Last year, he published findings uncovering evidence that mechanical forces can prime the immune system in the face of danger. As he further explored what others had found, he discovered that “mechanobiology” and how it affects the immune system was barely explored.

After comprehensively summarizing the studies to date on this topic, Winer and his colleagues concluded that while the field is in its infancy, the new insight it offers can be applied to just about any condition involving the immune system, including boosting or reducing inflammation, treating autoimmunity, promoting healing after tissue injury or infection and targeting diseases such as fibrosis and cancer.

“Currently force-sensitive immune therapies are lacking, but the potential to develop new treatments in this field is boundless,” Winer said. He noted several directions in which this line of therapeutics could go.

For example, one of the qualities of longstanding fatty liver disease is a scarred liver, called cirrhosis, which is often stiffer than healthy tissue. Of course, much more research will be needed, said Winer, but an intriguing possibility that arises from this new perspective is that therapies could be developed with the goal of changing the stiffness sensed by immune cells during the progression of liver inflammation, which in turn, might improve clinical outcomes by altering the immune response.

Similarly, he noted, the physical environment may drive immune cell responses at wounds or sites of infections. Sites of infection could include a bacterial infection at the skin, or even a viral infection of the lung, such as during COVID-19. These mechanoimmunology responses can be desirable in defending against infection but undesirable in the conditions of scarring and fibrosis. Therapeutic strategies could target these processes to fine-tune immune response.

Mechanoimmunology could improve on existing therapies, such as cell-based therapies, by optimizing the conditions in which the therapeutic cells are cultured so they respond best to what they will encounter in the body.

Vaccine design is also rich with opportunities for advancement, Winer said, such as improving the outer coat of a delivery particle to control the immune response that is elicited. Another possibility is in generating bandages or implantable biomaterials of varying mechanical properties to create new  immune-modulating environments  for cancer, wound healing, and regenerative medicine.

“We are at the tip of the iceberg with what we can do with the modulation of mechanical forces to impact immune cell function,” he said. “There is a promising future ahead for mechanoimmunology.”

About the Buck Institute for Research on Aging

At the Buck, we aim to end the threat of age-related diseases for this and future generations. We bring together the most capable and passionate scientists from a broad range of disciplines to study mechanisms of aging and to identify therapeutics that slow down aging. Our goal is to increase human health span, or the healthy years of life. Located just north of San Francisco, we are globally recognized as the pioneer and leader in efforts to target aging, the number one risk factor for serious diseases including Alzheimer’s, Parkinson’s, cancer, macular degeneration, heart disease, and diabetes. The Buck wants to help people live better longer. Our success will ultimately change healthcare. Learn more at: https://buckinstitute.org