Researchers at Boyce Thompson Institute and USDA-ARS are examining the relationship between aphids and the plant viruses they transmit on a molecular level, which could lead to new methods for controlling the pests. 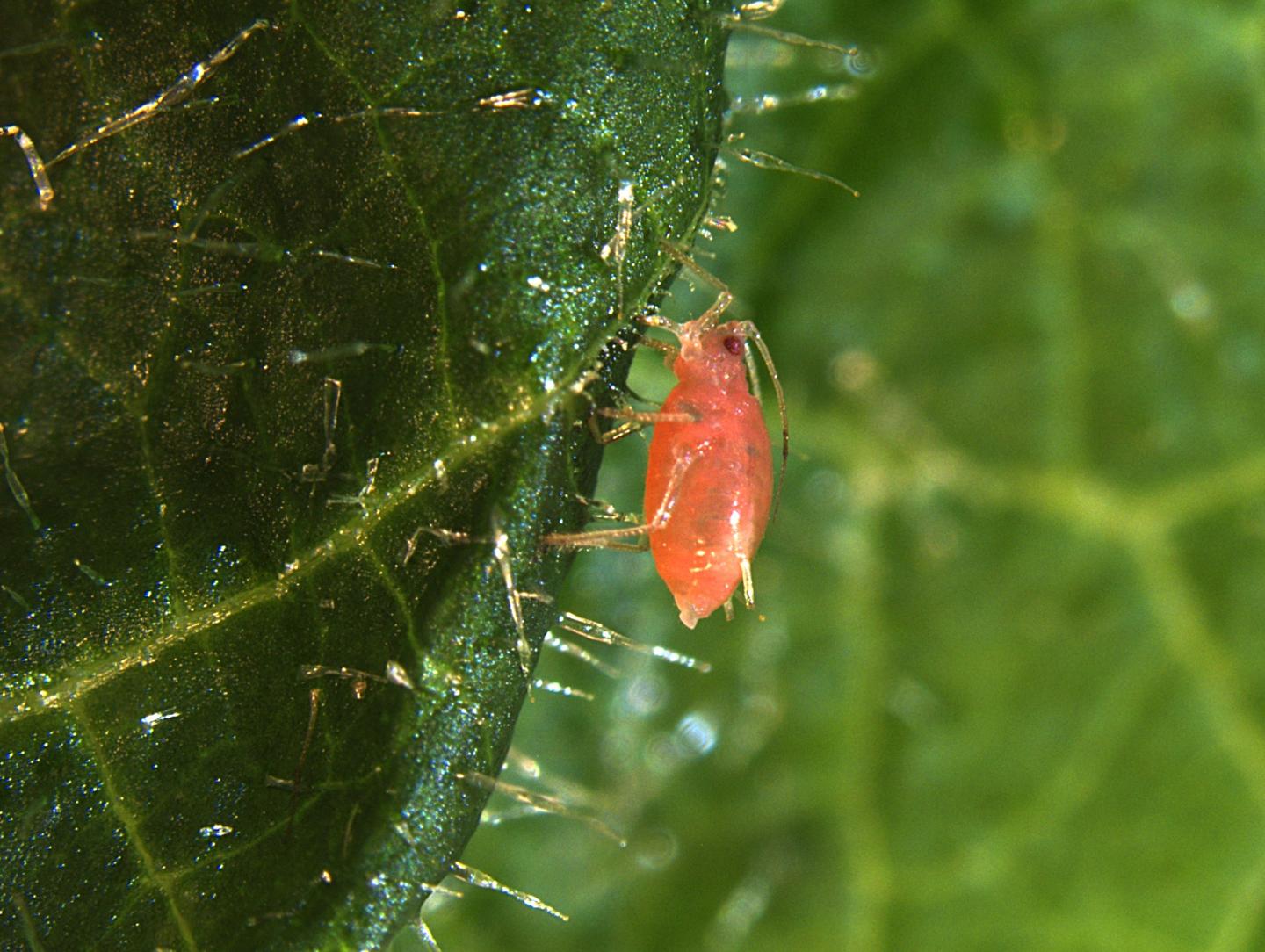 Aphids and the plant viruses they transmit cause billions of dollars in crop damage around the world every year. Researchers in Michelle Heck’s lab at the USDA Agricultural Research Service and Boyce Thompson Institute are examining the relationship at the molecular level, which could lead to new methods for controlling the pests.

Heck’s group used recently developed small RNA sequencing techniques to better understand how plant viruses interact with aphids. In an unanticipated discovery, Heck and her team uncovered what may be the first example of a plant virus and an insect virus cooperating to increase the likelihood that both viruses will spread to other plant and aphid hosts.

The work was published in the May 22 issue of Phytobiomes journal.
The researchers focused on the green peach aphid (Myzus persicae), which transmits more than 100 different plant viruses and feeds on a wide variety of crops, including peaches, tomatoes, potatoes, cabbage, corn and numerous others.

Potato leafroll virus (PLRV) is of particular concern because it can reduce potato yield by more than 50%, causing 20 million tons of annual global yield losses.

“The most interesting finding of this research is that PLRV suppressed the aphid’s immune system, and this suppression was mediated by a single virus protein, the P0 protein,” says Jennifer Wilson, a co-first author on the paper. Wilson is a PhD candidate in the School of Integrative Plant Science (SIPS) at Cornell University and is conducting her thesis research with Dr. Heck.

P0 is a PLRV protein that is expressed inside plant tissue but not inside the aphids. While P0 had been previously shown to suppress plants’ immune systems, the protein’s impact on the insect’s immune system was a surprise to the researchers.

“We don’t know if the aphids ingest P0 from the plant or not, but we do know that when P0 is present in the plant, the aphids’ immune systems are suppressed,” explains Wilson.

One critical result of the insect’s immune system being hampered is an increase in the proliferation of an insect virus, Myzus persicae densovirus (MpDNV). The researchers also found that aphids with more copies of MpDNV were more likely to have wings.

Because green peach aphids rarely have wings until the weather turns colder in the fall, this increase in winged insects could mean increased spread of PLRV and MpDNV to new hosts all summer long, a synergistic effect that wouldn’t happen as much if the aphids were infected with only one of the viruses.

“We think we have found the first example of cooperation between a plant virus and an insect virus,” Wilson says. “This cooperation may lead to increased transmission of both viruses.”

Wilson and Heck are currently working to test this hypothesis by repeating the experiments in aphids not infected with MpDNV, which Wilson collected last summer from farms in upstate New York.

Future work could include figuring out how MpDNV and the P0 protein could be used to control virus transmission by aphids.

“Developing strategies to block virus transmission in the field is a major goal of our research program,” said Heck, also an adjunct assistant professor in SIPS. “Wilson’s thesis work is paradigm shifting. Stay tuned for more exciting stuff from her in the near future.”

Researchers from BTI, Cornell and the USDA-ARS collaborated on this study, which was supported by grants from the National Science Foundation and the USDA.

Carbon-neutral fuel made from sunlight and air

New book on metastasis: mechanism to therapy from CSHLPress

Scienmag Dec 13, 2019
Credit: Image courtesy of Carolina Rodriguez-Tirado from the Pollard lab in collaboration with David Entenberg and…