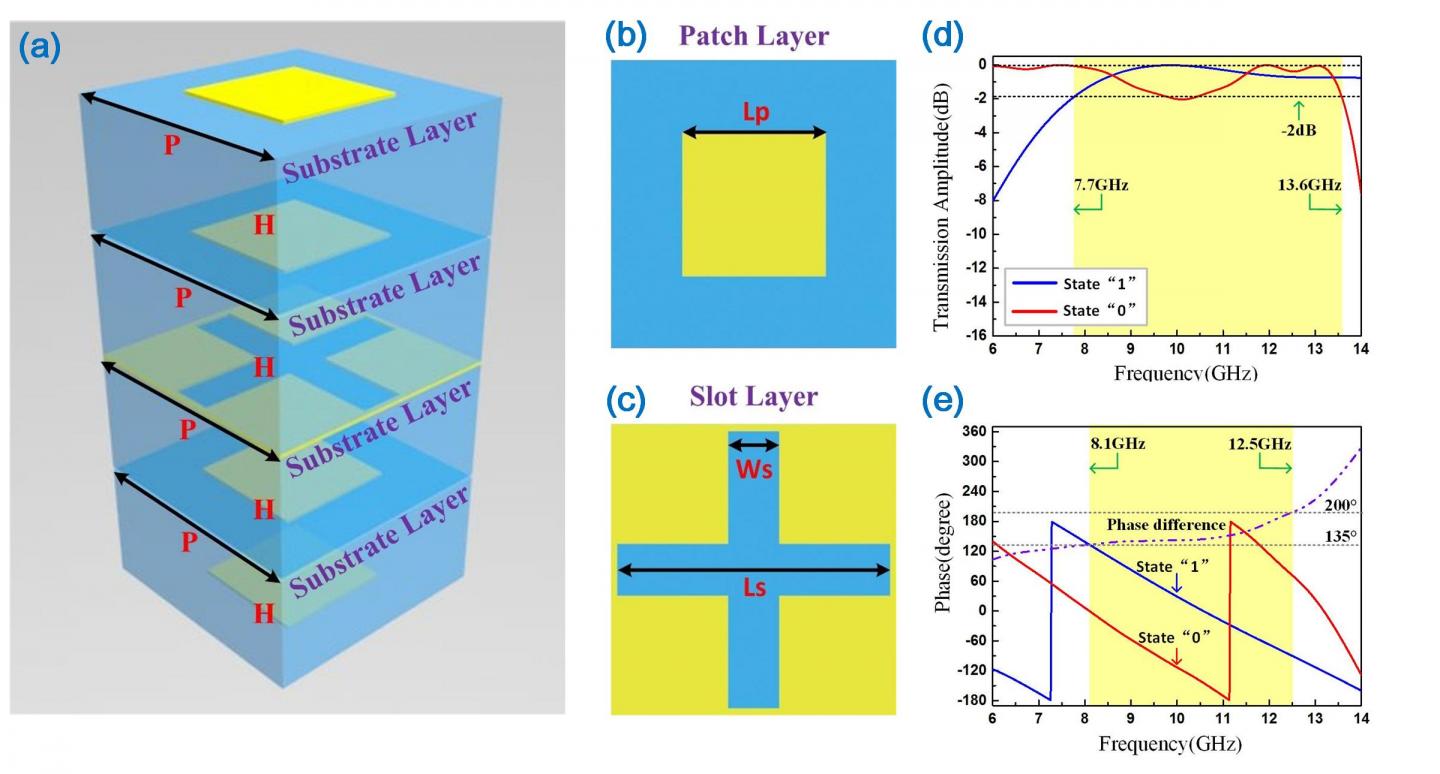 Due to their excellent performance in manipulating electromagnetic (EM) waves freely and flexibly, metasurfaces have been widely investigated since the beginning of the 21st century. However, with the rapid development of digital information technology, the traditional analog metasurfaces with continuous phase control become difficult to control the digital information. In 2014, digital coding and programmable metasurfaces were proposed, which make it possible to manipulate the EM waves from the digital aspect, building up a bridge between the information science and physical metasurface. Recently, some researchers have proposed a novel broadband transmission-type 1-bit digital coding metasurface, and analyzed its manipulations on EM far-field radiating functionalities.

The related paper entitled “Broadband transmission-type 1-bit coding metasurface for beam forming and scanning” was published in SCIENCE CHINA Physics, Mechanics & Astronomy, in which RuiYuan Wu and Prof. TieJun Cui from Southeast University are the first author and the corresponding author, respectively.

For a long time, improving the working bandwidth is always a big challenge of metasurfaces. Generally, wideband design of reflection-type metasurface is easier to implement because only the phase response should be considered, and the reflection amplitude remains above 95% due to the presence of metallic ground. In contrast, in the design of transmission-type metasurface, not only the phase response needs to satisfy the requirements for digital coding schemes, but also a high transmission amplitude is demanded. The realization of both conditions relies on strong resonance of the digital particle, which is very difficult to maintain in a wide band.

To overcome this difficulty, the authors adopted a multi-layer transmission-type structure, as shown in Figure 1(a), to implement the digital particles. The structure is composed of four identical metallic square patches (see Figure 1(b)), a metallic cross-shaped slot layer (see Figure 1(c)), and dielectric substrates. By adjusting the sizes of square patches, the phase responses of transmitted EM waves would be changed accordingly. After optimizations between the higher transmittance and sufficient phase difference of 1-bit coding, two digital particles with different geometries were designed to represent the digital states ‘0’ and ‘1’. As displayed in Figures 1(d) and 1(e), the phase difference between the two particles was kept near 180° to ensure the 1-bit coding effect in the wideband range of 8.1-12.5 GHz with high transmittance, corresponding to an over 40% relative bandwidth.

Based on the broadband characteristics of the digital particles, a digital coding metasurface design was firstly constructed to achieve high-directional beam forming in the wide band, in which the sidelobe levels were below ?10dB, as shown in Figures 2(a) and 2(b). Furthermore, the digital particles on the metasurface were encoded as the sequence of ‘010101…’ to radiate two symmetrical beams, where the deflecting angles could scan continuously in one-dimensional range with the change of working frequency. The scanning angle is more than 20°, as shown in Figures 2(c) and 2(d). The proposed design breaks the current bandwidth limit in the transmission-type coding metasurfaces, indicating wide application potentials in radar and wireless communication systems.