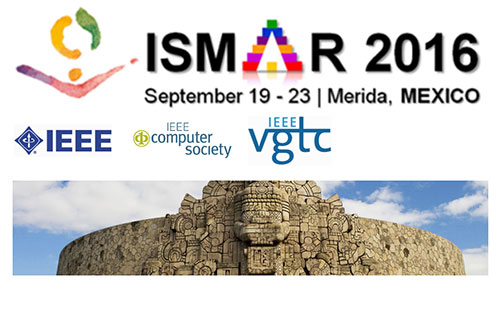 Professor Walterio Mayol-Cuevas in the Department of Computer Science is to chair the IEEE ISMAR, the most prominent academic conference on augmented and mixed reality.

Augmented and mixed reality are part of a continuum that runs from purely virtual worlds to the mixing of real objects and scenes with virtual information. At the centre of it are core problems such as spatial mapping, visualisation and mobile hardware architectures as well as the human factors of human perception and usability.

ISMAR, sponsored by the Institute of Electrical and Electronics Engineers, attracts hundreds of participants from academia and, increasingly, from industry. It has been fundamental in the development of technologies that have impacted in other areas. One of these is real-time Visual Simultaneous Localisation and Mapping (VSLAM) which enables spatial representations of the surroundings and allows virtual information to be immediately put in context. Real-time VSLAM has had applications in areas such as robotics and is now an established area in computer vision.

Professor Mayol-Cuevas will be General Chair of ISMAR 2016, which is being held in Merida, Yucatan, Mexico 18-23 September. His work with colleagues on VSLAM has been showcased at ISMAR since 2003, and he has previously served as Europe's Programme Chair and in other conference-organising positions.