Bringing custom microbes to the business of recycling plastic

Scientists working on a solution for plastic waste have developed a two-step chemical and biological process to break down and upcycle mixed plastics into valuable bioproducts. 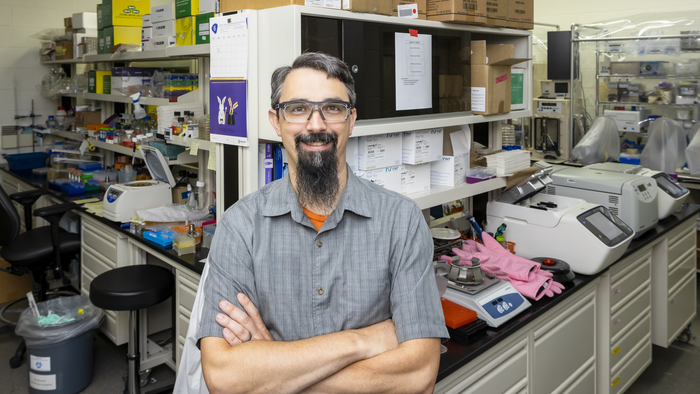 Scientists working on a solution for plastic waste have developed a two-step chemical and biological process to break down and upcycle mixed plastics into valuable bioproducts.

The project, which involves multiple institutions, draws on synthetic biology expertise at the Department of Energy’s Oak Ridge National Laboratory to engineer a microbe that converts deconstructed plastic waste into building blocks for next-generation materials.

The new process, described in the journal Science, would replace a system that now requires painstaking, costly sorting of materials, which has resulted in only about 5% of plastics being recycled in the United States.

The project is led by the National Renewable Energy Laboratory and also brings together scientists from  the Massachusetts Institute of Technology, the University of Wisconsin-Madison and ORNL under the Bio-Optimized Technologies to keep Thermoplastics out of Landfills and the Environment, or BOTTLE, Consortium.

Different plastics contain different polymers, each with unique chemical building blocks. The BOTTLE researchers developed a process to convert mixed plastics to a single chemical product, working toward a solution that would allow recyclers to skip sorting.

The first step in the process relies on oxygen and catalysts to break down large polymer molecules into their smaller chemical building blocks. The process was applied to a mixture of three common plastics: polystyrene, or PS, used in disposable coffee cups; polyethylene terephthalate, or PET, used in single-use beverage bottles, polyester clothing and carpets; and high-density polyethylene, or HDPE, used in many common consumer plastics and often associated with milk jugs.

“This is a potential entry point into processing plastics that cannot be recycled at all today,” said Gregg Beckham, a senior research fellow at NREL and head of BOTTLE.

The oxidation process breaks down these plastics into a complex mixture of chemical compounds — including benzoic acid, terephthalic acid and dicarboxylic acids — that would require advanced and costly separations to yield pure products. That is where biology comes into play.

BOTTLE colleagues engineered a soil microbe, Pseudomonas putida, to biologically convert or “funnel” the mixture of small-molecule intermediates to single products: either polyhydroxyalkanoates, or PHAs, which are an emerging form of biodegradable bioplastics; or beta-ketoadipate, which can be used to make new performance-advantaged nylon materials.

The experiment built on a process developed by ORNL’s Adam Guss and colleagues at NREL to engineer the bacterium with desired traits from other organisms. The process, outlined in the journal Metabolic Engineering, converted deconstructed PET into building blocks for a superior nylon product that is more water- and heat-resistant — ideal for applications such as automotive parts.

“We took a combinatorial approach to pathway assembly, basically finding the best combination of genes from different organisms that allowed us to get robust utilization of PET in Pseudomonas putida,” Guss said. “ORNL specializes in modifying nonmodel microbes to add traits useful for biotechnology, tapping our deep expertise in synthetic biology as well as transcriptomics and proteomics to discover new metabolic pathways.”

“Biological funneling simply means we’ve engineered the metabolic network of a microbe to direct the carbon from a large number of substrates to a single product,” said NREL’s Allison Werner, a co-author on the Science paper. “To do this, we take DNA from nature — usually other microbes — and paste it into Pseudomonas putida’s genome. The DNA is transcribed into RNA, which in turn is translated into proteins that perform diverse biochemical transformations, forming a new metabolic network and ultimately enabling us to capture more carbon and to tune where it goes.”

Guss and colleagues have spent years perfecting P. putida to convert the plant biopolymer lignin, derived from bioenergy crops, into advanced bioproducts as part of DOE’s Center for Bioenergy Innovation and Agile BioFoundry. In 2020, Guss led a team that announced it had engineered the microbe to simultaneously digest five of the most abundant compounds of lignocellulosic biomass.

In the next steps for BOTTLE, “we’re continuing to expand the range of molecules that P. putida can eat as we work to break down more types of plastics and also more real-world plastics that have additional additives,” Guss said.

“Plastics are major environmental pollutants and are largely made using fossil carbon,” he said. “This research sits at that intersection of breaking down today’s plastic waste and converting it into building blocks for the next generation of plastics that are both recyclable-by-design and biodegradable.”

Funding was provided by DOE’s Advanced Manufacturing Office and Bioenergy Technologies Office. The work was performed as part of the BOTTLE Consortium.

Editor’s note: This article was adapted from an NREL announcement.