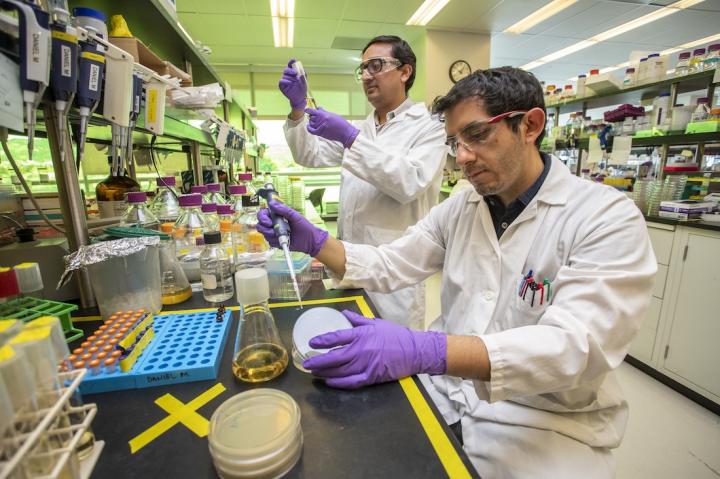 With an estimated daily fuel demand of more than 5 million barrels per day, the global aviation sector is incredibly energy-intensive and almost entirely reliant on petroleum-based fuels. Unlike other energy sectors such as ground transportation or residential and commercial buildings, the aviation industry can’t easily shift to renewable energy sources using existing technologies.

However, a new analysis by scientists at the Department of Energy’s Lawrence Berkeley National Laboratory (Berkeley Lab) shows that sustainable plant-based bio-jet fuels could provide a competitive alternative to conventional petroleum fuels if current development and scale-up initiatives continue to push ahead successfully.

“Techno-economic analysis and life-cycle greenhouse gas mitigation cost of five routes to bio-jet fuel blendstocks,” published recently in the journal Energy & Environmental Science, provides promising evidence that optimizing the biofuel production pipeline – taking carbohydrate-rich plant material and using genetically modified bacteria to digest the isolated sugars into energy-dense molecules that are then chemically converted into a fuel product – is well worth the effort.

“It’s challenging to electrify aviation using batteries or fuel cells in part because of the weight restrictions on aircraft, so liquid biofuels have the potential to play a big role in greenhouse gas emissions reductions,” said lead author Corinne Scown, a researcher in Berkeley Lab’s Energy Technologies Area as well as DOE’s Joint BioEnergy Institute (JBEI). “The team at JBEI has been working on biological routes to advanced bio-jet fuel blends that are not only derived from plant-based sugars but also have attractive properties that could actually provide an advantage over conventional jet fuels.”

How to get fuel from plant material

Currently, multidisciplinary teams based at JBEI are focused on optimizing each stage of the bio-jet fuel production process. Some researchers specialize in engineering ideal source plants – referred to as biomass – that create a high proportion of carbohydrates and a low proportion of lignin, a type of material that, as of now, is more challenging to make useful. Meanwhile, others are developing methods for efficiently isolating the carbohydrates in non-food biomass and breaking them into sugar molecules that bacteria can digest, or “bioconvert,” into a fuel molecule. To obtain the highest possible yield from bioconversion, yet other JBEI researchers are examining what genetic and environmental factors make the modified bacteria more efficient.

Once these stages are optimized, JBEI scientists can transition the technologies to commercial partners who may then modify and blend the fuels into ready-to-use products and devise strategies to industrialize the scale of production. Given the vast amount of experimentation and innovation needed to accomplish all this, Scown and her co-authors used innovative analysis methods to assess whether the undertaking could actually reach the end game of a jet fuel alternative that airlines will want to use.

“Our hope is that early in the research stages, we can at least simulate what we think it would look like if you develop these fuel production routes to the point of maturity,” Scown said. “If you were to push them to the ethanol benchmark – the technology to create ethanol from plant material like corn stalks, leaves, and cobs has been around a long time, and we can ferment sugars with a 90 percent efficiency – how close would this get us to the market price of petroleum fuels? That is important to know now.

“Thankfully, the answer is they can be viable. And we’ve identified improvements that need to happen all along the conversion process to make that happen.”

Imagining the production process at scale

Due to the biomass deconstruction and fuel synthesis technologies developed at JBEI, the theoretical cost of bio-jet fuel has declined steadily in recent years and is currently as low as $16 per gallon, as compared to $300,000 per gallon when JBEI was established, according to co-author and JBEI postdoctoral fellow Nawa Baral. The cost of standard jet fuel is about $2.50 per gallon.

To explore how bio-jet fuel could bridge the remaining price gap, the research team used complex computer simulations that modeled the necessary technology and subsequent costs of complete, scaled-up production pathways at different efficiency levels and with a range of biomass and chemical inputs. The authors simulated a total of five different production pathways to four distinct fuel molecules.

The results showed that all five pathways could indeed create fuel products at the target price of $2.50 per gallon if manufacturers are able to convert the leftover lignin into a valuable chemical – something JBEI researchers are currently working toward – that could be sold to offset the cost of biofuels. The net price of a gallon of biofuel could be lowered further if airlines were offered even a modest financial credit for emissions reduction.

Following some industry research, the team also found that airlines may be willing to pay a premium of as much as fifty cents per gallon because all four biofuels deliver more energy per unit volume, meaning a plane could fly farther on a tank of the same size.

“The development of plant-based compounds that have a performance advantage over their petroleum-based counterparts is an important factor in determining their marketplace viability,” said Blake Simmons, a co-author and the Chief Science and Technology Officer at JBEI.

However, as promising as these findings are, getting the biofuel production technology to the gold-standard yields assumed in these simulations will require further advances.

“It’s clear that, to get these fuels to commercial viability, we need all hands on deck,” Scown noted. “But this analysis highlights the importance of multi-institutional, integrative research centers like JBEI because no group working on one phase of the process alone can make it happen.”

The other co-authors on the paper are JBEI scientists Olga Kavvada, Daniel Mendez-Perez, Aindrila Mukhopadhyay, and Taek Soon Lee.

Funded by the DOE’s Office of Science, JBEI was created with a mission to develop economically-viable, carbon-neutral biofuels and bioproducts that utilize the sunlight energy stored in biomass.

Robot-guided video game gets older adults learning and working together