Bright colors in the animal kingdom: Why some use them to impress and others to intimidate

High up in a tree sits a bright red vermilion flycatcher. The males of this songbird species use their red feathers to attract females. Meanwhile, an Arizona mountain kingsnake slithers among the rocks below. Its vivid red, yellow and black coloring mimics that of the venomous coral snake to keep predators away. But why did these two species evolve similar colors to send completely different messages? 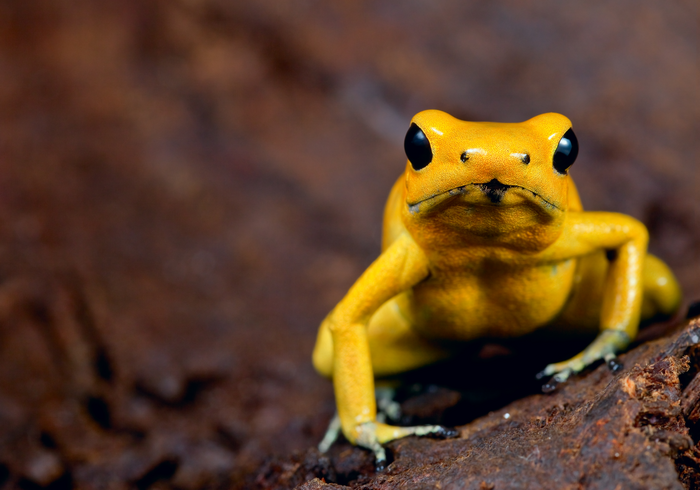 High up in a tree sits a bright red vermilion flycatcher. The males of this songbird species use their red feathers to attract females. Meanwhile, an Arizona mountain kingsnake slithers among the rocks below. Its vivid red, yellow and black coloring mimics that of the venomous coral snake to keep predators away. But why did these two species evolve similar colors to send completely different messages?

Researchers at the University of Arizona set out to better understand how vibrant color patterns evolved in land vertebrates. They found a strong and consistent link between the function of animals’ bright colors and the activity patterns of their ancestors. Species that use their bright colors as a sexual signal were found to be descended from ancestors that were active during the day. Conversely, species that use aposematism — bright coloring that warns predators that species are toxic — were found to have had ancestors that were active at night.

The research, published in the journal Evolution, was done by Zachary Emberts and John J. Wiens, both in the UArizona Department of Ecology and Evolutionary Biology. Their findings open a doorway to understanding the evolutionary differences between many of today’s colorful species.

“This pattern generally seems to hold across land vertebrates, a group with about 40,000 species that evolved over 350 million years,” said Wiens, a professor of ecology and evolutionary biology and senior author of the paper. “It doesn’t matter how a species produces the colors. The way that a bird makes red is different from how a lizard makes red, but this general pattern of day-night activity still works.”

According to the researchers, vividly colored lizards and birds typically use their coloring as a sexual signal for mates. In contrast, colorful amphibians and snakes generally wear them as a warning signal for predators. Many of these amphibians and snakes are diurnal, meaning they are active during the day, yet their ancestors were nocturnal, or active during the night.

The results showed no clear connection between warning colors and present-day diurnal or nocturnal activity. However, when the scientists used evolutionary relationships and statistics to estimate the day-night activity patterns in the ancestors of these species, a pattern emerged: sexual coloration was associated with ancestors that were active during daylight, whereas warning coloration was associated with ancestors that had a nocturnal lifestyle.

Early in their evolution, most ancestors of the studied species started out drab and dully colored. Over time, vivid coloration evolved separately across many different lineages. Because they helped animals survive and reproduce, bright color patterns became established and passed on to future generations, said Emberts, a postdoctoral research associate in EEB and the paper’s first author.

The ancestors of amphibians and snakes spent time mating and interacting with members of their own species in darkness. Having bright colors offered no sexual advantage for them because the colors couldn’t be seen by potential mates. According to the researchers, this absence of visual sexual signaling at night may have opened the possibility for intense colors to evolve for a very different purpose: a warning signal to predators.

“Warning colors have evolved even in species with no eyes,” Wiens said. “It’s questionable whether most snakes or amphibians can see colors, so their bright colors are generally used for signaling to predators rather than to members of the same species.”

The researchers have another idea that could help explain the results.

“The most straightforward potential explanation for this trend is situations where an animal is disturbed at times of inactivity,” Emberts said. “When they’re sleeping during the day and a predator disturbs them, that bright coloration becomes important.”

Wiens pointed to the example of the red-eyed tree frog, a mostly green frog found in tropical rainforests in Central America. While snoozing, its uniform green coloring blends in with the surrounding foliage. When startled by a predator, the frog can expose its red eyes, bright orange hands and feet, and vibrant blue and yellow flanks. The unexpected display of brilliant colors may buy the frog just enough time to escape.

The researchers analyzed data from 1,824 land vertebrate species, looking for correlations between being diurnal versus nocturnal and the function of animals’ bright coloring.

They categorized colors as warning signals if a species qualified as poisonous or unpalatable, or mimicked another species with these deterring characteristics. Colors were categorized as sexual signals if one sex – commonly the males – developed vibrant coloring at sexual maturity, while the other sex did not.

“Animals generally use these colors either as a sexual signal or as a warning signal – rarely both,” Wiens said.

The researchers analyzed whether a species was diurnal or nocturnal, whether it had conspicuous colors or not, and whether those colors were used as warning or sexual signals. “Conspicuous” colors included red, orange, yellow, blue and purple. Few species reside in colorful environments, so the animals’ striking colors stand out from the natural background. The results indicated that this color palette was used for the two different purposes to roughly equal extent, with blue being somewhat of an exception.

“It’s interesting to see that for some colors like red, orange and yellow, they’re used with similar frequency as both a way to avoid predators and as a way for mate attraction,” said Emberts. “On the flip side, blue coloration was more frequently associated with mating as opposed to predator avoidance.”

Wiens and Emberts plan to further study the evolution of color across other animals, insects and plants. Additionally, they hope to determine when conspicuous colors first evolved and how their functions have changed over time.