Breakthrough with a chain of gold atoms 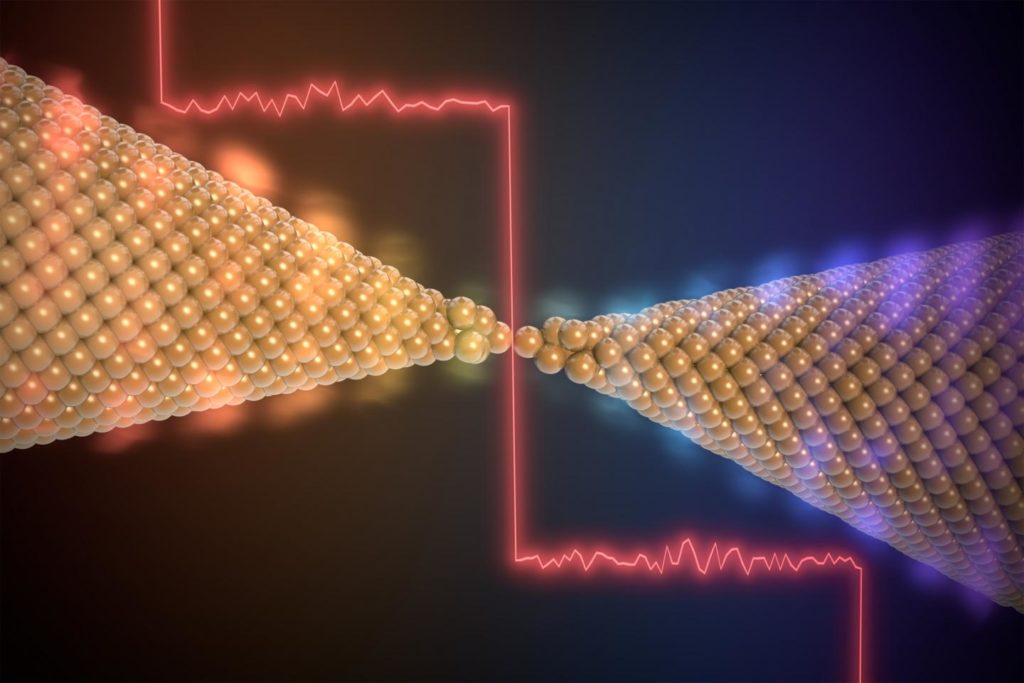 Heat transport is of similar fundamental importance and its control is for instance necessary to efficiently cool the ever smaller chips. An international team including theoretical physicists from Konstanz, Junior Professor Fabian Pauly and Professor Peter Nielaba and their staff, has achieved a real breakthrough in better understanding heat transport at the nanoscale. The team used a system that experimentalists in nanoscience can nowadays realize quite routinely and keeps serving as the “fruit fly” for breakthrough discoveries: a chain of gold atoms. They used it to demonstrate the quantization of the electronic part of the thermal conductance. The study also shows that the Wiedemann-Franz law, a relation from classical physics, remains valid down to the atomic level. The results were published in the scientific journal “Science” on 16 February 2017.

To begin with, the test object is a microscopic gold wire. This wire is pulled until its cross section is only one atom wide and a chain of gold atoms forms, before it finally breaks. The physicists send electric current through this atomic chain, that is through the thinnest wire conceivable. With the help of different theoretical models the researchers can predict the conductance value of the electric transport, and also confirm it by experiment. This electric conductance value indicates how much charge current flows when an electrical voltage is applied. The thermal conductance, that indicates the amount of heat flow for a difference in temperature, could not yet be measured for such atomic wires.

Now the question was whether the Wiedemann-Franz law, that states that the electric conductance and the thermal conductance are proportional to each other, remains valid also at the atomic scale. Generally, electrons as well as atomic oscillations (also called vibrations or phonons) contribute to heat transport. Quantum mechanics has to be used, at the atomic level, to describe both the electron and the phonon transport. The Wiedemann-Franz law, however, only describes the relation between macroscopic electronic properties. Therefore, initially the researchers had to find out how high the contribution of the phonons is to the thermal conductance.

The doctoral researchers Jan Klöckner and Manuel Matt did complementary theoretical calculations, which showed that usually the contribution of phonons to the heat transport in atomically thin gold wires is less than ten percent, and thus is not decisive. At the same time, the simulations confirm the applicability of the Wiedemann-Franz law. Manuel Matt used an efficient, albeit less accurate method that provided statistical results for many gold wire stretching events to calculate the electronic part of the thermal conductance value, while Jan Klöckner applied density functional theory to estimate the electronic and phononic contributions in individual contact geometries. The quantization of the thermal conductance in gold chains, as proven by experiment, ultimately results from the combination of three factors: the quantization of the electrical conductance value in units of the so-called conductance quantum (twice the inverse Klitzing constant 2e2/h), the negligible role of phonons in heat transport and the validity of the Wiedemann-Franz law.

For quite some time it has been possible to theoretically calculate, with the help of computer models as developed in the teams of Fabian Pauly and Peter Nielaba, how charges and heat flow through nanostructures. A highly precise experimental setup, as created by the experimental colleagues Professor Edgar Meyhofer and Professor Pramod Reddy from the University of Michigan (USA), was required to be able to compare the theoretical predictions with measurements. In previous experiments the signals from the heat flow through single atom contacts were too small. The Michigan group succeeded in improving the experiment: Now the actual signal can be filtered out and measured.

The results of the research team make it possible to study heat transport not only in atomic gold contacts but many other nanosystems. They offer opportunities to experimentally and theoretically explore numerous fundamental quantum heat transport phenomenona that might help to use energy more efficiently, for example by exploiting thermoelectricity.