A group of researchers has succeeded in converting methane into methanol using light and dispersed transition metals such as copper in a process known as photo-oxidation. According to an article reporting the study published in Chemical Communications, the reaction was the best obtained to date for conversion of methane gas into liquid fuel under ambient conditions of temperature and pressure (25 °C and 1 bar respectively). 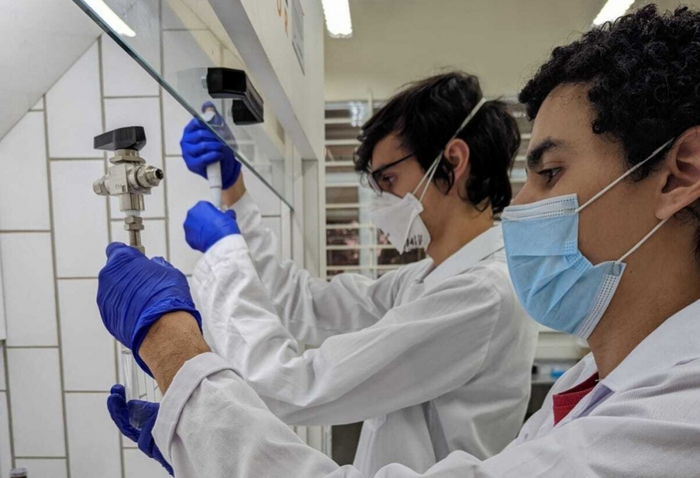 A group of researchers has succeeded in converting methane into methanol using light and dispersed transition metals such as copper in a process known as photo-oxidation. According to an article reporting the study published in Chemical Communications, the reaction was the best obtained to date for conversion of methane gas into liquid fuel under ambient conditions of temperature and pressure (25 °C and 1 bar respectively).

The term bar as a unit of pressure derives from the Greek word for weight (baros). One bar is equivalent to 100,000 Pascals (100 kPa), which is very close to the standard atmospheric pressure at sea level (101,325 Pa).

The results of the study are an important step in making natural gas available as an energy source for the production of alternative fuels to gasoline and diesel. Although natural gas is considered a fossil fuel, its conversion into methanol emits less carbon dioxide (CO2) than other liquid fuels in the same category.

In Brazil, methanol plays a key role in biodiesel production and in the chemical industry, which uses it to synthesize many products.

Furthermore, methane capture from the atmosphere is crucial to mitigate the adverse effects of climate change, as the gas has 25 times the potential of CO2, for example, to contribute to global warming.

“There’s a great debate in the scientific community about the size of the planet’s methane reserves. According to some estimates, they may have double the energy potential of all other fossil fuels combined. In the transition to renewables, we’ll have to tap into all this methane at some point,” Marcos da Silva, first author of the article, told Agência FAPESP. Silva is a PhD candidate in the Physics Department of the Federal University of São Carlos (UFSCar).

The study was supported by FAPESP via two projects (20/14741-6 and 21/11162-8), by the Higher Research Council (CAPES, an agency of the Ministry of Education), and by the National Council for Scientific and Technological Development (CNPq, an arm of the Ministry of Science, Technology and Innovation).

According to Ivo Freitas Teixeira, a professor at UFSCar, Silva’s thesis advisor and last author of the article, the photocatalyst used in the study was a key innovation. “Our group innovated significantly by oxidizing methane in a single stage,” he said. “In the chemical industry, this conversion occurs via the production of hydrogen and CO2 in at least two stages and under very high temperature and pressure conditions. Our success in obtaining methanol under mild conditions, while also expending less energy, is a major step forward.”

According to Teixeira, the results pave the way for future research into the use of solar energy for this conversion process, potentially reducing its environmental impact still further.

They then used the photocatalysts in methane oxidation reactions with hydrogen peroxide as an initiator. The copper-PHI catalyst generated a large volume of oxygenated liquid products, especially methanol (2,900 micromoles per gram of material, or µmol.g-1 in four hours).

“We discovered the best catalyst and other conditions essential to the chemical reaction, such as using a large amount of water and only a small amount of hydrogen peroxide, which is an oxidizing agent,” Teixeira said. “The next steps include understanding more about the active copper sites in the material and their role in the reaction. We also plan to use oxygen directly to produce hydrogen peroxide in the reaction itself. If successful, this should make the process even safer and economically viable.”

Another point the group will continue to investigate relates to copper. “We work with dispersed copper. When we wrote the article, we didn’t know whether we were dealing with isolated atoms or clusters. We now know they’re clusters,” he explained.

In the study, the scientists used pure methane, but in future they will extract the gas from renewables such as biomass.
According to the United Nations, methane has so far caused about 30% of global warming since the pre-industrial age. Methane emissions from human activity could be reduced by as much as 45% in the decade ahead, avoiding a rise of almost 0.3°C by 2045.

The strategy of converting methane into liquid fuel using a photocatalyst is new and not available commercially, but its potential in the near term is significant. “We began our research over four years ago. We now have far better results than those of Professor Hutchings and his group in 2017, which motivated our own research,” Teixeira said, referring to a study published in the journal Science by researchers affiliated with universities in the United States and United Kingdom, and led by Graham Hutchings, a professor at Cardiff University in Wales.