Researchers have long known that emotional disorders have a lot in common. Many often occur together, like depression and social anxiety disorder. Treatments also tend to work across multiple disorders, suggesting shared underlying elements. But perhaps the most common shared characteristic is that almost all emotional disorders involve persistent negative thinking. 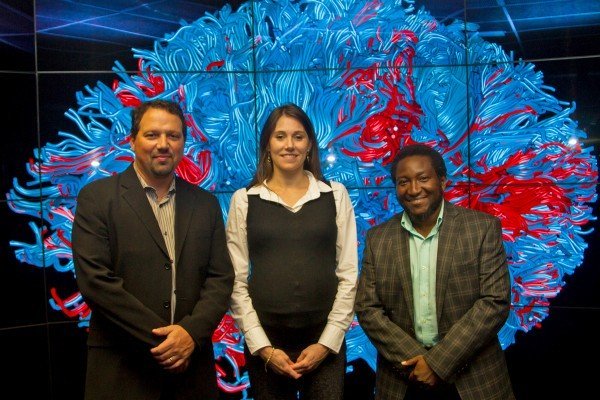 In an analysis of existing studies that used MRI images to study the brain’s white matter, researchers from the University of Illinois at Chicago describe common brain abnormalities found in multiple emotional disorders. Their findings are published in the journal NeuroImage: Clinical.

“This study provides important insights into mechanisms shared across multiple emotional disorders, and could provide us with biomarkers that can be used to more rapidly diagnose these disorders,” says Dr. Scott Langenecker, associate professor of psychiatry and psychology in the UIC College of Medicine and senior author of the paper. Those disorders, he said, can sometimes take many years to be diagnosed accurately.

The most common difference in white matter structure that Langenecker’s group found — present in every emotional disorder they looked at — was disruption in a region of the brain that connects different parts of the “default-mode network,” which is responsible for passive thoughts not focused on a particular task. That area is the left superior longitudinal fasciculus. The superior longitudinal fasciculus, or SLF, also connects the default-mode network and the cognitive control network, which is important in task-based thinking and planning and tends to work in alternation with the default-mode network. The constant negative thoughts or ruminations associated with most emotional disorders appear to be due to a hyperactive default-mode network, Langenecker said.

“If the part of the brain that helps rein in the default-mode network isn’t as well-connected through the SLF, this could explain why people with emotional disorders have such a hard time modulating or gaining control of their negative thoughts,” he said.

The researchers then performed a meta-analysis to determine which white-matter alterations may be common across multiple mood disorders and which are unique for a particular mood disorder. White matter includes the long nerve fibers called axons that transmit electrical signals.

Diffusion tensor imaging, or DTI, measures the degree to which water molecules move in one direction rather than randomly diffusing in all directions. It provides “an indirect measurement of the microstructure of white matter, and can give information about connectivity of different parts of the brain,” said Lisanne Jenkins, postdoctoral research fellow in psychiatry in the UIC College of Medicine and first author on the paper.

“If you think of white matter as the highways of the brain, connecting all the different regions and networks,” Jenkins said, an area with highly directional water movement “could be a major superhighway where all the cars are moving along quickly with little traffic.” An area with less-directed water movement could be “a two-lane road, with several exits and stop signs, maybe even some potholes, which slow down traffic.”

Brain regions connected by these slower pathways “may not communicate as well as they would in someone where this road looks more like a superhighway,” said Dr. Olusola Ajilore, associate professor of psychiatry in the UIC College of Medicine and a co-author on the paper.

The traditional diagnosis for OCD, he said, is repetitive thoughts about specific objects or tasks — thoughts that pertain to the world outside the self. The thoughts can also be internally-directed.

“Other emotional disorders, like depression, social anxiety, and panic disorder — the repetitive thoughts are directed at the self,” Ajilore said. “So our finding that OCD is more like the other emotional disorders makes sense, and we may now be able to further examine commonalities between these disorders that could improve our treatment of them individually.”

The disorder that stood out and shared the fewest white-matter characteristics with the others was post-traumatic stress disorder.

“While milder forms of trauma is common in other conditions, like major depression or generalized anxiety, it is possible that the brain regions we saw that were distinctly affected in PTSD participants are related to the experience of severe trauma or the re-experiencing of that trauma,” he said. In bipolar disorder, characterized by periods of both depression and mania, the researchers saw generally decreased water-directionality in the right side of the brain, including the right SLF, the area that connects the default-mode network and the cognitive control network.

“All emotional disorders had disruptions more so in the left hemisphere, but for bipolar disorder, we saw disruptions in white matter in both the right and left sides of the brain,” Langenecker said.

Older studies of stroke patients have shown that abnormalities in the right hemisphere are associated with externally-focused symptoms, like mania, while left hemisphere involvement — which the current study found in most emotional disorders — was more often associated with inwardly-focused symptoms, like depression. Langenecker said the bilateral changes his team observed in bipolar disorder may reflect vulnerability to mania and to depression and anxiety. Alyssa Barba, Miranda Campbell, Melissa Lamar, Stewart Shankman and Dr. Alex Leow, all of UIC, are the remaining co-authors on the paper.

Materials provided by University of Illinois at Chicago.