Brain circuit connects feeding and mood in response to stress 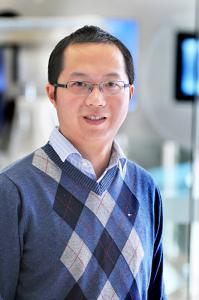 Many people have experienced stressful situations that trigger a particular mood and also change certain feelings toward food. An international team led by researchers at Baylor College of Medicine looked into the possibility of crosstalk between eating and mood and discovered a brain circuit in mouse models that connects the feeding and the mood centers of the brain. Published in the journal Molecular Psychiatry, these findings may help explain some of the observations between changes in mood and metabolism and provide insights into future solutions to these problems by targeting this circuit.

“This study was initiated by first author Dr. Na Qu, a psychiatrist of Wuhan Mental Health Center, China, when she was visiting my lab,” said corresponding author Dr. Yong Xu, associate professor of pediatrics and of molecular and cellular biology at Baylor College of Medicine.

Qu, a practicing psychiatrist who also conducts basic brain research, was interested in investigating whether there was a neurological basis for the association between depression and other psychiatric disorders and alterations in metabolism, such as obesity or lack of appetite, she had observed in a number of her patients.

Xu, Qu and their colleagues worked with a mouse model of depression induced by chronic stress and observed that depressed animals ate less and lost weight. Then, they applied a number of experimental techniques to identify the neuronal circuits that changed activity when the animals were depressed.

“We found that POMC neurons in the hypothalamus, which are essential for regulating body weight and feeding behavior, extend physical connections into another region of the brain that has numerous dopamine neurons that are implicated in the regulation of mood,” said Xu, who also is a researcher at the USDA/ARS Children’s Nutrition Research Center at Baylor and Texas Children’s Hospital. “We know that a decrease in dopamine may trigger depression.”

In addition to the physical connection between the feeding and the mood centers of the brain, the researchers also discovered that when they triggered depression in mice, the POMC neurons were activated and this led to inhibition of the dopamine neurons. Interestingly, when the researchers inhibited the neuronal circuit connecting the feeding and the mood centers, the animals ate more, gained weight and looked less depressed.

“We have discovered that a form of chronic stress triggered a neuronal circuit that starts in a population of cells that are known to regulate metabolism and feeding behavior and ends in a group of neurons that are famous for their regulation of mood,” Xu said. “Stress-triggered activation of the feeding center led to inhibition of dopamine-producing neurons in the mood center.”

Although more research is needed, Xu, Qu and their colleagues propose that their findings provide a new biological basis that may explain some of the connections between mood alterations and changes in metabolism observed in people, and may provide solutions in the future.

“Our findings only explain one scenario, when depression is associated with poor appetite. But in other cases depression has been linked to overeating. We are interested in investigating this second association between mood and eating behavior to identify the neuronal circuits that may explain that response,” Xu said.

Other contributors to this work include Yanlin He, Chunmei Wang, Pingwen Xu, Yongjie Yang, Xing Cai, Hesong Liu, Kaifan Yu, Zhou Pei, Ilirjana Hyseni, Zheng Sun, Makoto Fukuda, Yi Li and Qing Tian. The authors are affiliated with one or more of the following institutions: Baylor College of Medicine, Huazhong University of Science and Technology and China University of Geosciences.

Obesity and psychosocial well-being among patients with cancer

Coffee may protect against gallstones

New insight as to how cells maintain their identity