For his work in discovering new phenomena and developing novel tools to probe and control materials, Professor of Physics Kenneth Burch has been named a fellow of the American Physical Society, the world’s largest organization of professionals in physics and related disciplines. 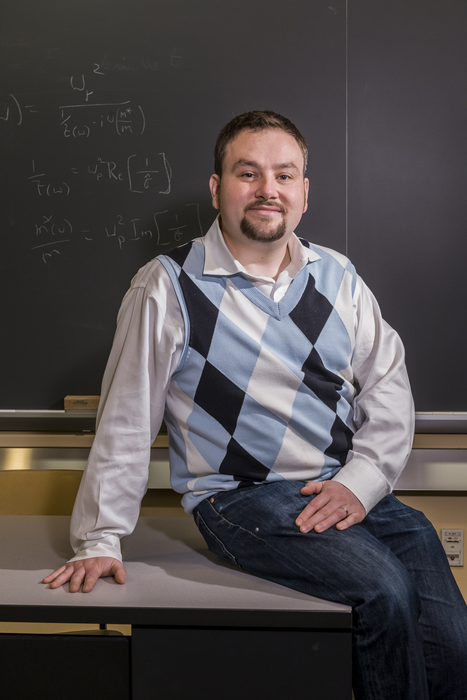 For his work in discovering new phenomena and developing novel tools to probe and control materials, Professor of Physics Kenneth Burch has been named a fellow of the American Physical Society, the world’s largest organization of professionals in physics and related disciplines.

“It is a real honor to be included in such a distinguished set of physicists,” Burch said. “I’m very grateful to the wonderful students, colleagues and collaborators over the years that contributed to our success.”

The honor is highly selective, with fewer than 250 members nominated annually from the organization’s approximately 50,000 members. Burch was nominated for the honor by the Condensed Matter Physics division of the society, according to a letter from APS President Frances Hellman, who noted Burch is being recognized: “For pioneering studies of two-dimensional materials including van der Waals heterostructures and developing the methods used to created layered van der Waals heterostructures.”

Van der Waals crystals, which are held together by friction, have been used to isolate single-atom-thick layers of material used to detect new physical effects and applications. The most common example is graphene, which is composed of atom-thick layers which can be peeled off by applying a piece of clear household adhesive tape.

Burch has used this procedure to create new interfaces between highly distinct materials. Specifically he produced the thinnest and most uniform samples, then combined them to serve as a platform upon which to create unique states with a range of physical properties. The two-dimensional magnetic crystals are being explored for a range of uses, including the potential to use their electronic properties – most notably “spin” – to advance quantum computing, “spintronics”, magnetic and optical sensors, and high temperature superconductors.

That includes his team’s discoveries of the Colossal Bulk Photovoltaic effect – among the largest conversions of light to electricity of any material – and the recent finding of an Axial Higgs Mode in a two-dimensional charge density wave system, a previously undetectable quantum excitation Burch describes as a magnetic relative of the mass-defining Higgs Boson particle.

“We have also uncovered new superconducting states and developed a novel biosensing platform based on graphene single atomic layer of carbon,” Burch said. “To achieve this the group has created a cleanroom in a glovebox, the first of its kind to allow fabrication of nanoscale devices entirely in an inert atmosphere. This enabled cutting edge and rapid progress by postdocs, graduate and undergraduate students in fabricating and measuring nanomaterials.”

Burch joined the Boston College faculty in 2013 and established The Burch Group Laboratory for Assembly & Spectroscopy of Emergence. His research has been supported by the agencies including the National Science Foundation, the National Institutes of Health, and the U.S. Department of Energy.

With Burch’s selection, six current and two former Boston College faculty have been named APS Fellows, including six from the Physics Department and two from the Chemistry Department.

“This prestigious distinction is a well-earned recognition of Prof. Burch’s highly productive and creative research program, and reflects the commitment of our department and Boston College to both fundamental and applied science,” said Professor of Physics and Department Chair Michael Graf.