CHAMPAIGN, Ill. — By working together, economic and racial justice organizers in the last decade have brought about policy changes to address economic inequality, researchers report in a new book. 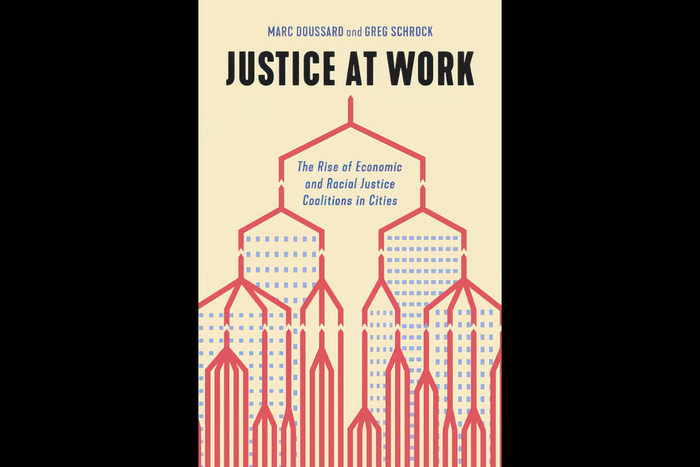 CHAMPAIGN, Ill. — By working together, economic and racial justice organizers in the last decade have brought about policy changes to address economic inequality, researchers report in a new book.

Doussard and Schrock say that racial justice organizing has changed the way activists work toward policy changes. Historically, community organizers focused on a single issue, whether it was fair wages or affordable housing, and used negotiation and dealmaking to effect changes. They downplayed discussing race for fear the volatile issue would erode support for their positions, Doussard said. That approach changed with the racialized foreclosure crisis in the late 2000s and the Great Recession, he said.

“The worst loans were made in communities of color. Their foreclosure rates were through the roof. At the same time, austerity budgets starved those same communities of the resources they needed,” Doussard said. “Every problem seemed to be connected through racism.”

Racial justice work offers an umbrella language to talk about those connected problems, he said.

“Racial justice is really effective for talking about issues of finance. That’s important because austerity and budget cuts have always been an issue in cities,” Doussard said. “If you talk about alternative funding models, people’s eyes glaze over. If you say a policy is discriminatory, people get it.”

For example, the Chicago Teachers Union built public support to stop school closings in minority neighborhoods in part by calling the plan “educational apartheid.” By centering race in their message, they built a coalition that included antiracism organizations, Doussard said.

Similarly, in “Fight for $15” campaigns around the nation for a $15-per-hour minimum wage, community organizations, unions and civil rights groups began working together, building larger and more diverse networks with more political connections. “Social movement participants at this moment find that adding new partners and issues to the agenda expands, rather than dilutes, their power,” Doussard and Schrock wrote.

By the time the COVID-19 pandemic put a spotlight on economic and social inequalities, activists had been connecting various social problems to systemic racism for years, and they had a way to talk about how the public health crisis and its effects were linked to race, Doussard said.

Labor organizers also have reacted to globalization, he said. Their focus for many years, particularly in Chicago, was trying to preserve the manufacturing jobs that were being moved overseas. They shifted their approach to the service economy, whose jobs can’t move and which often employ people – especially women – of color.

The authors wrote about “urban policy entrepreneurs” – the people who shape the public policy agendas in cities, as opposed to the conventional policymakers in Washington, D.C. Doussard and Schrock focus on cities where, Doussard said, it’s much easier for community groups to set the agenda and get the attention of mayors and council members through protests, pushing ballot initiatives and supporting rival political candidates.

The book uses the “Fight for $15” campaigns as an example. It passed in Seattle after one candidate made it a campaign issue and union leaders began advocating for it. The campaign then moved to other cities, demonstrating how a national network of activists share information such as how to write language for enforcement of a new policy, compelling ways to talk about it and ways to protest that are effective.

“Rerouting the focus of politics from Washington to cities is not just doing the same thing somewhere else. It is politics based in people’s everyday lives, in everyday connections,” Doussard said. “In deciding to deal with the minimum wage in cities rather than Congress, organizers ended up with a higher minimum wage, with follow-up benefits people didn’t think they would get and with strong, robust coalitions. So many voters and researchers are focused on Washington, and in the meantime, what is being done in cities is this remarkable transformation.”

The success of movements such as “Fight for $15” and campaigns against school closings and tax increment financing projects that burden low-income neighborhoods come from years of work building networks between labor, racial justice and community organizers and finding the most effective messages to garner support for policy changes, Doussard said.

“Across the many issues we consider, legislators voted for change after activists spent years or decades refining messages, models and supporting research,” Doussard and Schrock wrote. “This argues for activists finding and taking more chances: Trying new policies, reintroducing old ones, supporting new studies, trying on new messages and just generally advancing justice campaigns by inventing rather than waiting for opportunities.”

Information about “Justice at Work: The Rise of Economic and Racial Justice Coalitions in Cities” can be found online.