Bonelli’s eagle: successful reintroduction of an endangered species in Mallorca

Reintroducing species in new natural habitats is a strategy to help prevent the extinction of the most threatened organisms. However, this process is influenced by several factors ─which are not much explored in the scientific bibliography─ and its global success ratio is still low. 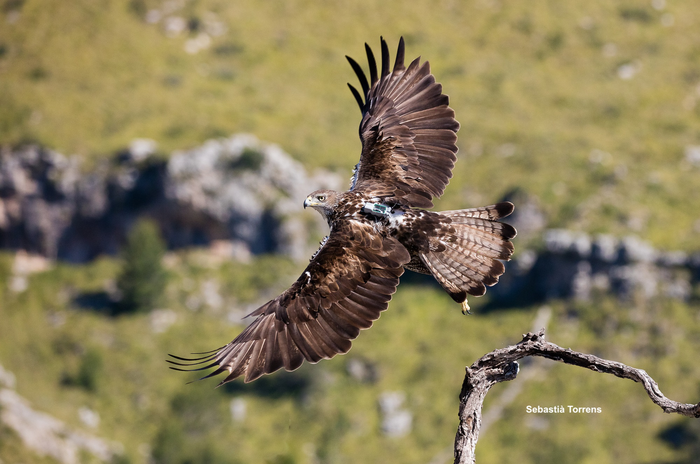 Reintroducing species in new natural habitats is a strategy to help prevent the extinction of the most threatened organisms. However, this process is influenced by several factors ─which are not much explored in the scientific bibliography─ and its global success ratio is still low.

A study coordinated by the Conservation Biology Group from the Faculty of Biology and the Biodiversity Research Institute (IRBio) of the University of Barcelona analyses the efficiency of reintroduction strategies for the Bonelli’s eagle in Mallorca (Spain). The study, carried out in collaboration with the Government of the Balearic Islands and the Wildlife Recovery Consortium (COFIB) within the framework of the European project LIFE Bonelli, provides new scientific knowledge in global ecology to increase the success options of reintroduction programs with the highest economic efficiency.

Bonelli’s eagle: from its disappearance to its reintroduction in Mallorca

The Bonelli’s eagle (Aquila fasciata), an emblematic bird of prey in the Mediterranean─ is a declining species in the central and northern areas of the Iberian Peninsula. In Mallorca, it disappeared during the 1970s as a result of an intense human persecution, despite being a key species in the natural environment as predator of birds and mammals and as a control of the ecosystem’s balance.

In 2011, the Government of the Balearic Islands, with the support from LIFE project, started the process of reintroduction of the eagle in Mallorca. This plan has counted on the scientific collaboration of the Conservation Biology Group of the UB and IRBio, a team that conducted the demographical analysis to validate the most efficient strategies in the reintroduction plan. The initiative of the species reintroduction in the island has been a success and there are now about 40 eagles, including nine breeding pairs.

The study, published in the journal Animal Conservation, from the Zoological Society of London (ZSL), examines the efficiency at a demographic and economic scale of the different strategies based on the release of birds of different ages and origins, that is, captive-born and wild-born species. Through a cost-benefit balance ─with biological and economic indicators─, the experts compared the reintroduction strategies: hacking based on captive breeding (‘Capthack’), hacking based on chicks extracted from wild nests in natural populations (‘NestHack’) and the translocation of wild, non-juvenile birds from natural populations recovered from rehabilitation centres (‘WildTrans’).

“The successful reintroduction of endangered species in the natural environment depends on several factors such as the amount and the age of the reintroduced individuals, the quality of the destination habitat, the used reintroduction methods, the origins of the reintroduced individuals, and the biological and ecological features of each species”, notes the lecturer Joan Real, head of the Conservation Biology Group of the UB and the Biodiversity Research Institute (IRBio) of the UB.

Why is releasing non-juvenile eagles the most effective model?

The non-juvenile eagle release system (WildTrans) would be the most successful strategy regarding the reintroduction of Bonelli’s eagle in Mallorca. “This system enables us to release sexually mature and more experienced individuals. This makes it easier for them to reproduce and therefore the population grows faster during the first years of reintroduction, which is the most critical period of the reintroduction”, notes Jaume Badia-Boher, member at the Department of Evolutionary Biology, Ecology and Environmental Sciences of the UB, and first author of the article.

Regarding the economic and human resources, the non-juvenile eagle release is also the most economic strategy compared to the other alternatives. Also, it is the only option to ensure the persistence of the eagle population in the long run in the context of limitation of the assessed logistic resources.

The island environment of Mallorca could have favoured the results of such strategy. “The natural barrier of the sea, in this case, could have limited the tendency of the released eagles to return to their origin populations, which can happen in species with a high dispersal ability”, notes the lecturer Antonio Hernández-Matías (UB-IRBio).

A species threatened by human action

Apart from the mentioned factors, the complex equation to reach a successful reintroduction needs knowledge on biology and ecology of the species, apart from experience in the management and the resources to breed animals in captivity and release them afterwards.

Like many diurnal raptors, these birds reach sexual maturity relatively late and lay few eggs (between one and two chicks per pair and year). The low annual productivity of chicks makes both wild and reintroduced populations ─with a reduced number of individuals─ to carry out a slow growth.

As a result, the populations of these birds of prey are sensitive to natural and human impacts. “All these factors make raptors one of the most endangered animal groups worldwide. Therefore, in order to get positive results, reintroductions of these species require years of sustained effort, persistence and releases”, authors say.

Mortality caused by human action ─accidents with power lines, persecution, accidental or provoked poisoning, etc.─ hardens the chances of survival of reintroduced eagles in the wild environment. “Therefore, before reintroducing a species, it is necessary to carefully assess whether the conditions are suitable, which may require the implementation of measures to reduce the magnitude of human-caused sources of danger”, the team warns.

Conserving and protecting biodiversity as a priority action

Biodiversity is decreasing every day in different places of the world. In this context of biological crisis, improving natural habitats is the first strategy to conserve biodiversity. As a precondition, it is necessary to remove the factors that affect the viability of species (causes of mortality, availability of food, etc.).

Animal release in a new environment is an ex situ conservation methodology that should be applied only when there are no in situ alternatives to protect the biodiversity. This environmental solution needs several requirements before putting it into practice. Among these is the fact that the species in question is extinct in the area where it originally lived, and that the reintroduction process does not alter or endanger native species or key ecological processes.

One of the factors that makes it hard to assess the species reintroduction plans is the lack of short-term monitoring programs for reintroduced populations. Promoting these studies will be decisive for the understanding of population dynamics of new individuals, evaluating the effectiveness of the taken measures and determining the decisive elements in the success or failure of reintroductions in different scenarios.

The study published in the journal Animal Conservation provides a new unpublished perspective to a field of ecology on which there are not many studies in the natural environment. “Based on our results, we consider this strategy to be more effective in species for which captive breeding is difficult, and in islands or with species without a high dispersal ability. However, the research is scarce in this field and science should be aimed to respond these questions”, conclude the authors.