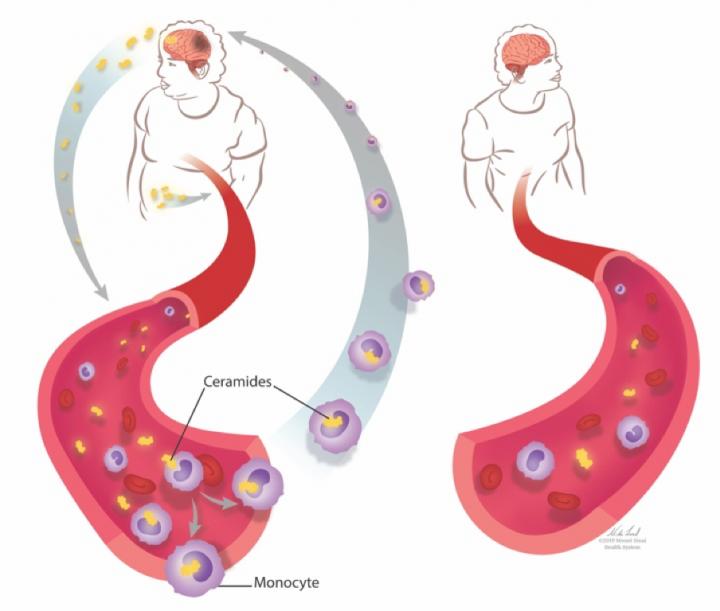 NEW YORK, April 11, 2019 — A newly published paper in the Lancet journal EBioMedicine identifies a link between high levels of blood lipids and worsening of disease in multiple sclerosis (MS) patients who are overweight or obese.

The longitudinal investigation, conducted by researchers at the Advanced Science Research Center(ASRC) at The Graduate Center of The City University of New York’s Neuroscience Initiative in collaboration with clinicians at the Icahn School of Medicine at Mount Sinai, followed recently diagnosed MS patients for two years. The researchers found that individuals who were overweight or obese had higher levels of blood lipids called ceramides, which placed markers on the DNA of monocytes, making them proliferate. Monocytes are blood cells that can travel to the brain and damage nerve fibers, and two years into their diagnosis, study participants with higher levels of ceramides and monocytes also had greater loss of motor skills and more brain injury.

“Our study identifies important correlations between ceramide levels, body mass index, and disease progression in MS patients,” said ASRC Neuroscience Initiative Director Patrizia Casaccia, a professor at The Graduate Center. “We found that overweight and obese individuals with MS have higher ceramide levels than people with the disease who are not overweight and also than individuals who are overweight or obese but otherwise in healthy conditions. This is important because we and others had previously identified ceramides in the cerebro-spinal fluid surrounding the brain of MS patients, and we attributed their increased abundance to the body’s efforts to recycle the damaged myelin. In this study, however, we also detect higher ceramide levels in the blood of overweight and obese MS patients than we did in patients with normal body mass index, suggesting that overabundant lipids can be derived not only from damaged brain cells, but also from excessive dietary intake of saturated fats.”

Two cohorts of patients — a primary one and a validation group — were recruited from the Corinne Goldsmith Dickinson Center for Multiple Sclerosis at Mount Sinai and the National Institutes of Health to participate in the study. For the first group, 54 therapy-naïve MS patients 18 to 60 years old with high or normal body mass indexes (BMIs) were evaluated using brain MRI to identify signs of brain damage; a clinical assessment to ascertain weight, disabilities and other vital information; and blood tests to analyze the types of circulating lipids and white blood cells. An independent validation group of 91 MS patients from the National Institute of Health with the same characteristics and additional control cohorts of healthy individuals within the same BMI range were similarly evaluated.

Researchers found that MS patients with high BMIs had higher ceramide levels and more circulating monocytes than were evident in healthy individuals with the same BMIs. High-BMI MS patients showed worsening disability and more brain lesions at the MRI compared to their normal BMI counterparts. The researchers went on to find that ceramides can enter inside immune cells called monocytes and change the way these cells read the genetic information encoded in the DNA. These epigenetic changes were also found in monocytes circulating in the blood of MS patients with high BMI.

The detection of ceramides inside the nucleus of blood cells and the ability of these lipids to induce epigenetic changes suggests that saturated fatty acids may have long-lasting functional effects, which over time steer the MS disease course towards worsening disability. In short, bad dietary habits may have negative consequences in healthy subjects, but they have an even more pronounced deleterious effect on patients with MS because the degrading myelin can accumulate and further increase ceramide levels.

“This study gives us a much-needed view into the environmental influences that can affect and change the behavior of cells in an individual’s body,” said Kamilah Castro, the paper’s first author and a graduate student in professor Casaccia’s lab. “Our findings suggest that increased levels of saturated fat as a result of dietary habits are one likely cause of the epigenetic changes that advance MS, which gives us a starting point for a potential intervention.”

The researchers’ findings support the concept of nutri-epigenomics (the ability of food to modify the way genomic information is interpreted by each cell) and the idea that lifestyle factors such as diet and weight can function as disease modifiers. Additional studies on larger cohorts are needed to validate the current findings. Further investigation is also needed to determine whether specific dietary interventions and weight management could be useful in helping MS patients manage and slow the progression of their disease and better respond to disease-modifying treatments.

“This translational study is exciting from a clinical perspective as it sheds light on a potentially important mechanism that can help explain our clinical observations regarding obesity and MS prognosis,” said Ilana Katz Sand, associate medical director of the Corinne Goldsmith Dickinson Center for MS at Mount Sinai. “We look forward to continuing to work on this important topic through future clinical studies to evaluate the impact of weight management and dietary intervention in MS.”

About the Advanced Science Research Center

The ASRC at The Graduate Center elevates scientific research and education at CUNY and beyond through initiatives in five distinctive, but increasingly interconnected disciplines: environmental sciences, nanoscience, neuroscience, photonics, and structural biology. The ASRC promotes a collaborative, interdisciplinary research culture with renowned researchers from each of the initiatives working side-by-side in the ASRC’s core facilities, sharing equipment that is among the most advanced available.

The Graduate Center of The City University of New York (CUNY) is a leader in public graduate education devoted to enhancing the public good through pioneering research, serious learning, and reasoned debate. The Graduate Center offers ambitious students more than 40 doctoral and master’s programs of the highest caliber, taught by top faculty from throughout CUNY — the world’s largest public urban university. Through its nearly 40 centers, institutes, and initiatives, including its Advanced Science Research Center (ASRC), The Graduate Center influences public policy and discourse and shapes innovation. The Graduate Center’s extensive public programs make it a home for culture and conversation.

Scienmag Dec 3, 2019
Credit: PhenoCam Network Carbon serves as the building block of life -- it cycles through every organism, the…