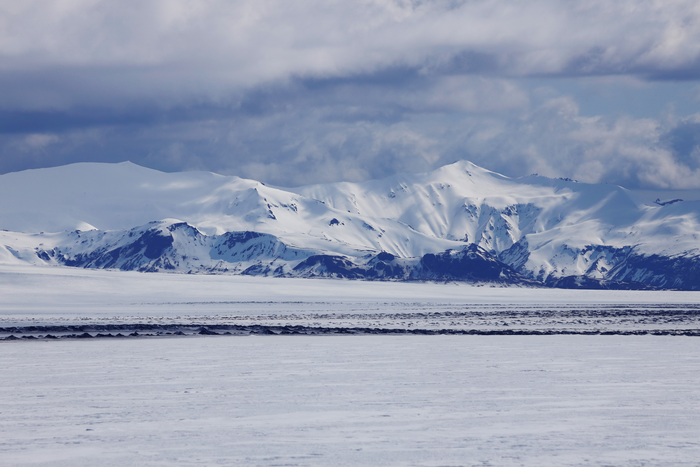 This press release and accompanying multimedia are available online at: https://news.agu.org/press-release/blue-blob-near-iceland-could-slow-glacial-melting/

“Blue Blob” near Iceland could slow glacial melting
Chilly seawater may slow ice loss on the island until 2050, then warming and melting may accelerate

WASHINGTON — A region of cooling water in the North Atlantic Ocean near Iceland, nicknamed the “Blue Blob,” has likely slowed the melting of the island’s glaciers since 2011 and may continue to stymie ice loss until about 2050, according to new research.

The origin and cause of the Blue Blob, which is located south of Iceland and Greenland, is still being investigated. The cold patch was most prominent during the winter of 2014-2015 when the sea surface temperature was about 1.4 degrees Celsius (2.52 degrees Fahrenheit) colder than normal.

The new study uses climate models and field observations to show that the cold water patch chilled the air over Iceland sufficiently to slow ice loss starting in 2011. The model predicts cooler water will persist in the North Atlantic, sparing Iceland’s glaciers until about 2050. Ocean and air temperatures are predicted to increase between 2050 and 2100, leading to accelerated melting.

While cooler water in the North Atlantic offers a temporary respite for Iceland’s glaciers, the authors estimate that without steps to mitigate climate change, the glaciers could lose a third of their current ice volume by 2100 and be gone by 2300. If the country’s 3,400 cubic kilometers (about 816 cubic miles) of ice melt, sea level will rise by 9 millimeters (0.35 inches).

“In the end, the message is still clear,” said lead author Brice Noël, a climate modeler who specializes in polar ice sheets and glaciers at Utrecht University. “The Arctic is warming fast. If we wish to see glaciers in Iceland, then we have to curb the warming.”

The paper is published in the AGU journal Geophysical Research Letters, which publishes high-impact, short-format reports with immediate implications spanning all Earth and space sciences. Its findings may help scientists to better understand the indirect effects of the ocean on glaciers.

“It’s crucial to have an idea of the possible feedbacks in the Arctic because it’s a region that is changing so fast,” Noël said. “It’s important to know what we can expect in a future warmer climate.”

Nowhere on Earth has warmed as quickly as the Arctic. Recent studies report the area is warming four times faster than the global average. Iceland’s glaciers steadily shrank from 1995 to 2010, losing an average of 11 gigatons of ice per year. Starting in 2011, however, the speed of Iceland’s melting slowed, resulting in about half as much ice loss, or about 5 gigatons annually. This trend was not seen in nearby, larger glaciers across Greenland and Svalbard.

Noël and his colleagues investigated the cause of this slowdown by estimating the glaciers’ mass balance — how much they grew or melted annually from 1958 to 2019. They used a high-resolution regional climate model that works at the small scale of Iceland’s glaciers to estimate how much snow the glaciers received in winter and how much ice was lost from meltwater runoff in summer. The researchers found that cooler waters near the Blue Blob are linked to observations of lower air temperatures over Iceland’s glaciers and coincide with the slowdown of glacial melting since 2011.

Several researchers have proposed that the Blue Blob is part of the normal sea surface temperature variability in the Arctic. Notably, especially cold winters in 2014 and 2015 led to record cooling, which caused upwelling of cold, deep water, even as ocean temperatures around the region warmed due to climate change.

Before the Blue Blob, a long-term cooling trend in the same region, called the Atlantic Warming Hole, reduced sea surface temperatures by about 0.4 to 0.8 degrees Celsius (0.72 to 1.44 degrees Fahrenheit) during the last century and may continue to cool the region in the future. A possible explanation for the Warming Hole is that climate change has slowed the Atlantic Meridional Overturning Circulation, an ocean current that brings warm water up from the tropics to the Arctic, thus reducing the amount of heat delivered to the region.

The end of Iceland’s glaciers?

Noël projected the future climate of Iceland by combining the same regional climate model with a global climate model to predict how North Atlantic ocean temperatures would affect the glaciers’ fate until 2100, under a scenario of rapid warming. The models predicted that the North Atlantic near Iceland will stay cool, slowing — and perhaps even temporarily stopping — ice loss from the glaciers by the mid-2050s.

The authors verified that the models accurately reconstructed the mass of the glaciers using almost 1,200 measurements of snow depth collected between 1991 and 2019 by colleagues at the University of Iceland and satellite measurements of the elevation and extent of glaciers taken from 2002 to 2019 by co-authors at the Delft University of Technology.

“I think their analysis is very thorough,” said Fiamma Straneo, a physical oceanographer at the Scripps Institution of Oceanography who was not involved in the study. “They have a really state-of-the-art regional atmospheric model for looking at the variability of glaciers.” Straneo thinks this approach could be used to understand changes in other glaciers that occur over land, such as in the Himalayas and Patagonia. “There is very active research in land terminating glaciers because they are one of the largest contributors to sea level rise right now.”

Notes for Journalists:
This research study is published with open access and is freely available. Download a PDF copy of the paper here. Neither the paper nor this press release is under embargo.