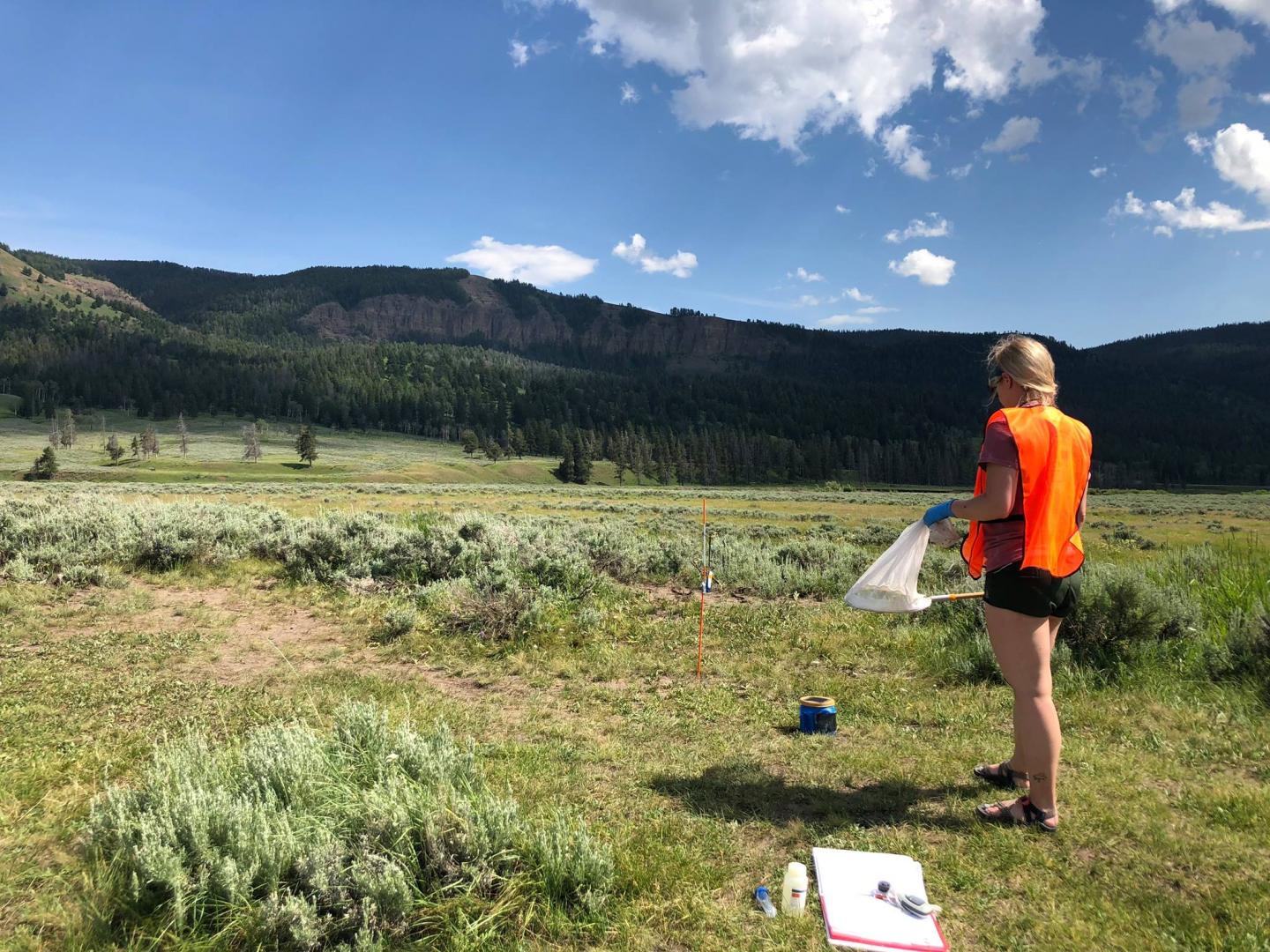 INDIANAPOLIS — They say you are what you eat; that’s the case for every living thing, whether it’s humans, animals, insects, or plants, thanks to stable isotopes found within.

Now a new study explores these stable isotopes in blow flies as a non-invasive way to monitor the environment through changes in animals in the ecosystem. The work, led by IUPUI researchers Christine Picard, William Gilhooly III, and Charity Owings, was published April 14 in PLOS ONE.

“Blow flies are found on all continents, with the exception of Antarctica,” said Gilhooly, who said the disruptions of climate change have increased the need for new ways to monitor animals’ environments without disturbing them. “Therefore, blow flies are effectively sentinels of animal response to climate change in almost any location in the world.”

The multidisciplinary research between the biology and earth science departments began more than four years ago to answer a fundamental ecological question: “What are they (blow flies) eating in the wild,” said Owings, a postdoctoral researcher at the University of Tennessee-Knoxville who was a Ph.D. student at IUPUI at the time of the study. “We know these types of flies feed on dead animals, but until now, we really had no way of actually determining the types of carcasses they were utilizing without actually finding the carcasses themselves.”

“Stable isotopes are literally the only way we could do that in a meaningful way,” Picard added.

Stable isotopes, which include carbon, nitrogen, hydrogen and oxygen, are found in the food we eat and become a part of us.

“When we eat a hamburger, we are getting the carbon isotopes that came from the corn that the cow was fed. Flies do the exact same thing,” Gilhooly said.

Picard and Owings set out to collect blow flies in Indianapolis, Yellowstone National Park and the Great Smoky Mountains.

“Collecting flies is easy: Have rotten meat, can travel,” Picard said. “That is it: We would go someplace, open up our container of rotten meat, and the flies cannot resist and come flying in. Collections never took longer than 30 minutes, and it was like we were never there.”

Once the flies were collected, they were placed in a high-temperature furnace to convert the nitrogen and carbon in the blow fly into nitrogen gas and carbon dioxide gas. Those gases were then analyzed in a stable isotope ratio mass spectrometer, which shows slight differences in mass to reveal the original isotope composition of the sample.

“Carbon isotopes will tell us the main form of sugar that is in a diet. Food from an American diet has a distinct isotope signature because it has a lot of corn in it, either from the corn fed to domesticated animals or high fructose corn syrup used to make most processed foods and drinks. This signal is different from the carbon isotopes of trees and other plants. These isotope patterns are recorded in the fly as they randomly sample animals in the environment.”

Identifying the stable isotopes allowed the researchers to determine whether the blow flies were feeding on carnivores or herbivores when they were larvae.

“With repeated sampling, one can keep an eye on animal health and wellness,” Picard said. “If the flies indicate a sudden, massive of dead herbivores — and knowing what we know right now, that typically the herbivores are readily scavenged and not available for flies – it could tell us one of two things: Herbivores are dying, yet the scavengers don’t want anything to do with them as they may be diseased; or there are more herbivores than the carnivores/scavengers, and perhaps the populations of these animals has decreased.”

In Indianapolis, the majority of the blow fly larvae feed on carnivores. The researchers speculate this is because of the large number of animals being hit and killed by cars, making carcass scavenging less likely and carcasses more available to the blow flies to lay their eggs.

However, they were surprised by their findings in the national park sampling sites, where the larvae fed on carnivores instead of herbivores, despite the herbivores’ greater numbers. They speculate the competition is higher to scavenge for the larger herbivore carcasses and not readily accessible for the blow flies.

Picard, Gilhooly and Owings also observed the impact of humans on animals. The carbon isotopes from the flies found the presence of corn-based foods in Indianapolis, which was expected, but also in the Great Smoky Mountains. With the Smokies being the most visited park in the country, opportunistic scavengers have greater access to human food.

“This wealth of information provided by the blow flies will be fundamental to detecting changes within the ecosystem,” Picard said.

“This research has the potential to revolutionize the way biologists investigate important global issues, especially in the era of climate change,” Owings said. “Researchers will no longer be restricted to finding animals themselves, which is a daunting task; the flies can easily find the animals and then can be ‘called in’ by scientists.”

In addition to providing a real-time early-warning system for tracking ecosystem change in response to climate change, the distribution of blow flies makes isotope analysis useful in almost any location.

“Compared to other approaches, the relative ease of collecting the flies and measuring their isotopes means that ecosystem monitoring efforts can be rapidly deployed in any environmentally sensitive region,” Gilhooly said.

IU’s world-class researchers have driven innovation and creative initiatives that matter for 200 years. From curing testicular cancer to collaborating with NASA to search for life on Mars, IU has earned its reputation as a world-class research institution. Supported by $854 million last year from our partners, IU researchers are building collaborations and uncovering new solutions that improve lives in Indiana and around the globe.