Blow flies can be used detect use of chemical weapons, other pollutants

INDIANAPOLIS — Researchers at the School of Science at IUPUI have found that blow flies can be used as chemical sensors, with a particular focus on the detection of chemical warfare agents. 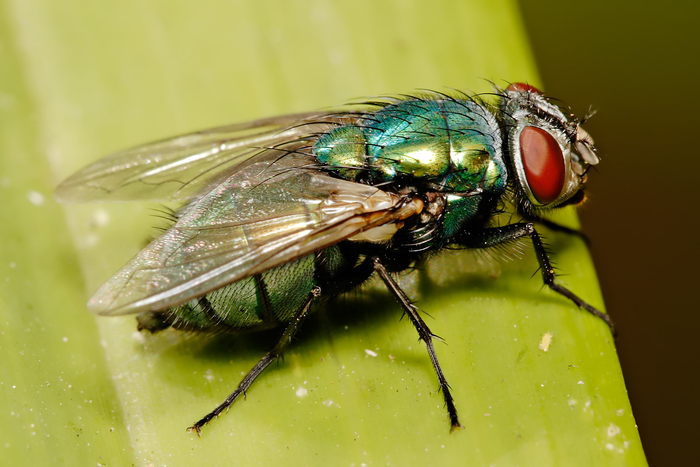 INDIANAPOLIS — Researchers at the School of Science at IUPUI have found that blow flies can be used as chemical sensors, with a particular focus on the detection of chemical warfare agents.

Despite widespread bans, chemical weapons have been deployed in recent conflicts such as the Syrian civil war, and some experts fear they may be used in the war in Ukraine. An IUPUI study shows that blow flies could be used as a safer alternative for investigating the use of these weapons — as well as other chemicals in the environment — keeping humans out of potentially dangerous situations.

The work appears in the journal Environmental Science and Technology. The research was funded through a contract from the U.S. Defense Advanced Research Projects Agency.

“Blow flies are ubiquitous, and they are very adept at sampling the environment around us,” said Christine Picard, an associate professor of biology and director of the Forensic and Investigative Sciences Program in the School of Science at IUPUI. “They will fly through the environment, taste it, and that information will be stored in their guts. Through a series of experiments, we were able to look at how different environmental factors would impact their detection of chemical weapon simulants.”

“We used a mass spectrometer to determine what chemicals were in the blow flies’ guts,” Manicke said. “We were able to detect the chemical warfare agent simulants, and also some of the things chemical agents get broken down into once they’re in the environment. If a fly were to come across a water source, with a chemical agent hydrolyzed in the water, we would find that in the fly.”

While chemical warfare agents do not persist for long in the environment, the researchers found they’re preserved well enough in the fly’s guts for chemical analysis. They also were able to detect the chemical warfare agent simulants up to 14 days after a fly’s initial exposure — illustrating a safer alternative for the collection of samples, without risking human lives.

“If an area is too dangerous, too remote or in an access-restricted area — or if one just wanted to collect samples covertly — then one just needs to put out some bait and the flies will come to the bait,” Manicke said. “We can scan through big areas by drawing the flies into a trap and analyzing what is in their guts.”

This research also has important applications for environmental scientists who want to understand how pollutants, such as pesticides, move through the environment.

“Due to the collaboration between Dr. Manicke and Dr. Picard, we were able to work on a project with the potential to make a direct impact,” said Sarah Dowling, a Ph.D. student who co-authored the study. “It is fulfilling to know that the work we did throughout this project could improve the safety of warfighters and others who deal with chemicals in the environment.”

Next, the researchers plan to apply what they learned from this study toward a new two-year project funded by the Army Research Office on Environmental Chemistry. This work will focus on the detection of molecules from “insensitive munitions,” which are a new type of explosive compounds that are less likely to detonate by accident. Because of this, however, they tend to deposit more in the environment.

Using blow flies from areas that are remote or dangerous, Manicke and Picard will look for traces of insensitive munition compounds in the flies, indicating environmental contamination.

Additional contributors to the study include IUPUI Ph.D. students Christine Skaggs and Khadija Moctar and Charity Owings, a postdoctoral researcher at the University of Tennessee Knoxville, who was a Ph.D. student at IUPUI at the time of the study.