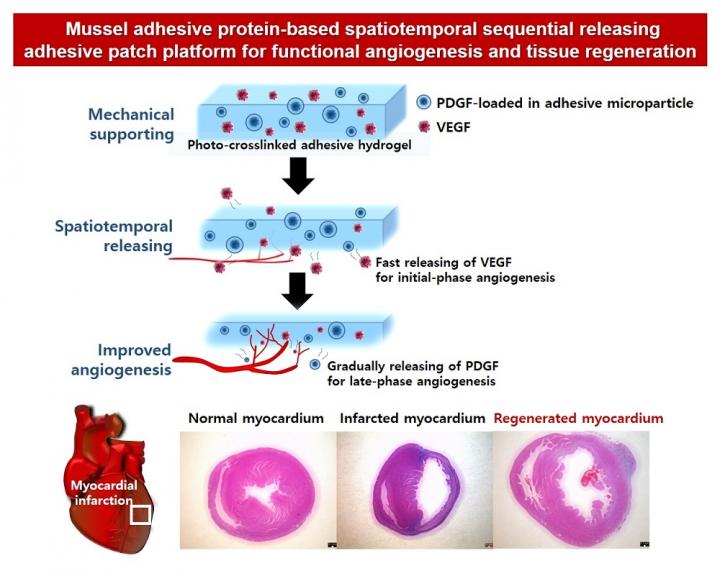 Blood vessels deliver nutrients and oxygen to each organ in our body. They are difficult to completely restore to their original conditions once damaged by myocardial infarction or severe ischemic diseases. This is because various angiogenic growth factors must be applied sequentially in order to restore the vascular structure. Recently, a research team at POSTECH has bioengineered a novel adhesive patch platform that can efficiently deliver blood vessel-forming growth factors spatiotemporally using mussel adhesive protein (MAP), a bio-adhesive material that is made from mussels harmless to humans.

A POSTECH research team led by Professor Hyung Joon Cha and Dr. Tae Yoon Park of the Department of Chemical Engineering has developed a drug-delivering adhesive patch using two formulations – coacervate-based microparticles and light activation-based crosslinked hydrogels – that can be mass-produced. The team verified their effectiveness in tissue regeneration including neovascularization using a rat model for myocardial infarction and excisional wound model incapable of self-healing.

The research team produced microparticles by instantaneously encapsulating and crosslinking platelet-derived growth factor (PDGF) required for the late-phase angiogenesis during the process of forming coacervate microdroplets formed by the electrostatic interaction of MAP and hyaluronic acid.

This effective novel angiogenesis-inducing platform showed that PDGF was secreted and delivered 1.9 times later in time despite its smaller size than VEGF. In addition, the team confirmed that the platform allows crosslinking to occur instantaneously so that it can easily adhere even to uneven curved surfaces.

“We have developed a new platform that can efficiently deliver angiogenic factors spatiotemporally by using the formulation property of MAP, an original biomaterial,” remarked Professor Hyung Joon Cha who has long devoted himself to studying the MAP. “It is of great significance that we have confirmed the functional recovery beyond effective neovascularization by applying it to actual animal model of myocardial infarction and severely damaged skin model.”

“It will be successfully applicable to chronic and ischemic diseases in a similar environment.” He added eagerly, “This platform can play a key role in the neovascularization treatment market as it uses biocompatible biomaterials that are harmless to the human body.”

This MAP-based hydrogel and coacervate liquid microdroplets fabrication technology have undergone a technology transfer to Nature Gluetech Co., Ltd. and is currently being commercialized.

The finding of this study was published in Biomaterials, the most authoritative journal in the field of biomaterials. The study was conducted with the support from the health and medical technology development project supported by the Ministry of Health and Welfare and the Korea Institute for Health Industry Promotion, and as part of the Nano-New Materials Core Technology Development Program of the Ministry of Science and ICT and the National Research Foundation of Korea.