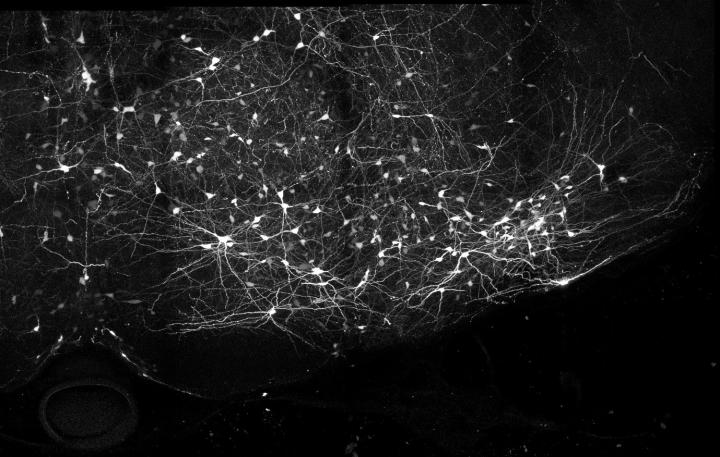 A team of scientists from Australia, France, New Zealand and the UK has discovered a group of brain cells that function as a ‘master-controller’ for the cardiovascular system by orchestrating the control of blood flow to different parts of the body.

The discovery, published in the Journal of Physiology, may pinpoint where cardiovascular issues such as high blood pressure and heart failure are controlled in the brain.

Using genetically modified viruses in an animal model, the researchers were able to make brain cells that govern blood flow glow under the microscope. This allowed them to trace, for the first time, the cells’ connections to multiple parts of the cardiovascular system.

They identified one critical group of cells in the most evolutionarily ancient part of the brain, the medulla oblongata, that send connections to multiple cardiovascular targets, suggesting a preeminent role for these cells.

In a follow-up study the team rendered those same brain cells sensitive to laser light (a technique called ‘optogenetics’), allowing them to control their activity with the flick of a switch.

Brain cells were found to simultaneously exert influence on multiple regions of the body, including the heart and the blood vessels of the fore- and hindlimbs, suggesting that the function of these cells is to coordinate activity across the cardiovascular system as a whole.

Associate Professor Simon McMullan, who led the Macquarie University team, said the study reveals how the brain directs blood flow to different parts of the body, a finding which has puzzled neuroscientists for many years.

“We found that brain cells broadcast their message to many different targets to co-ordinate global control of blood flow,” said Associate Professor McMullan.

“The brain’s control over your heart and blood vessels is essential for your survival. Even doing something as simple as going from lying down to a sitting up position can cause huge shifts in blood flow that, if left unchecked, could threaten your ability to stay conscious, and therefore, alive.”

Professor Robin McAllen, who led the team from the Florey Institute of Neuroscience & Mental Health, said, “The body needs to orchestrate competing demands for blood from different tissues at different times. We have discovered master controllers of the cardiovascular system that regulate the heart and blood vessels at the same time.”

AAIH releases primer to advance understanding within the industry

Scienmag Oct 17, 2019
Technical whitepaper, as well as a high-level overview, seek to define a foundational lexicon and illustrate…

Tyumen historians spoke about the evolution of Russian universities

Study to test text-based counseling for young adults with marijuana…