Blocking the buzz: MXene composite could eliminate electromagnetic interference by absorbing it

A recent discovery by materials science researchers in Drexel University’s College of Engineering might one day prevent electronic devices and components from going haywire when they’re too close to one another. A special coating that they developed, using a type of two-dimensional material called MXene, has shown to be capable of absorbing and disbursing the electromagnetic fields that are the source of the problem. 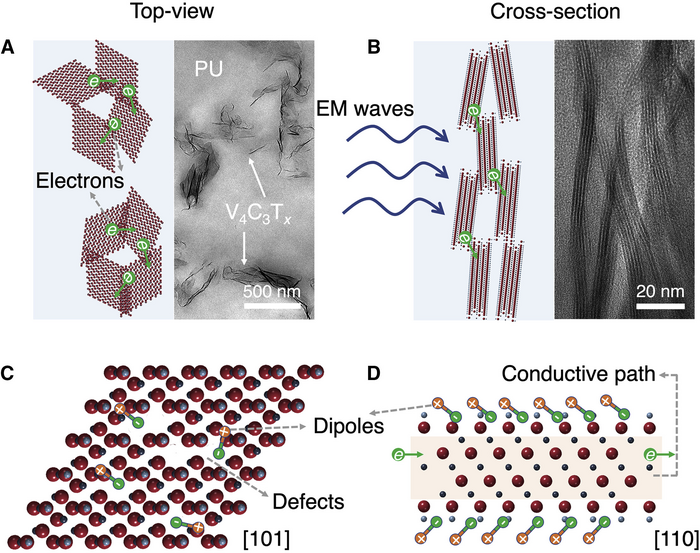 A recent discovery by materials science researchers in Drexel University’s College of Engineering might one day prevent electronic devices and components from going haywire when they’re too close to one another. A special coating that they developed, using a type of two-dimensional material called MXene, has shown to be capable of absorbing and disbursing the electromagnetic fields that are the source of the problem.

Buzzing, feedback or static are the noticeable manifestations of electromagnetic interference, a collision of the electromagnetic fields generated by electronics devices. Aside from the sounds, this phenomenon can also diminish the performance of the devices and lead to overheating and malfunctions if left unchecked.

While researchers and technologists have progressively reduced this problem with each generation of devices, their strategy thus far has been to encase vital components with a shielding that deflects electromagnetic waves. But according to the Drexel team, this isn’t a sustainable solution.

“Because the number of electronics devices will continue to grow, deflecting the electromagnetic waves they produce is really just a short-term solution,” said Yury Gogotsi, PhD, Distinguished University and Bach professor in the College of Engineering, who led the research. “To truly solve this problem, we need to develop materials that will absorb and dissipate the interference. We believe we have found just such a material.”

In the recent edition of Cell Reports Physical Science, Gogotsi’s team reported that combining MXene, a two-dimensional material they discovered more than a decade ago, with a conductive element called vanadium in a polymer solution, produces a coating that can absorb electromagnetic waves.

While researchers have previously demonstrated that MXenes are highly effective at warding off electromagnetic interference by reflecting it, adding vanadium carbide in a polymer matrix enhances two key characteristics of the material that improve its shielding performance.

According to the researchers, adding vanadium to MXene structure — a material known for its durability and corrosion-resistant properties, that is used in steel alloys for space vehicles and nuclear reactors — causes layers of the Mxene to form in sort of electrochemical grid that is perfect for trapping ions. Using microwave-transparent polymer, makes the material also more permeable to the electromagnetic waves.

Combined, these properties produce a coating that can absorb, entrap and dissipate the energy of electromagnetic waves at greater than 90% efficiency, according to the research.

“Remarkably, combining polyurethane, a common polymer used in common wall paint, with a tiny amount of MXene filler — about one part MXene in 50 parts polyurethane — can absorb more than 90% of incident electromagnetic waves covering the entire band of radar frequencies — known as X-band frequencies,” said Meikang Han, PhD, who participated in the research as a post-doctoral researcher at Drexel. “Radio waves just disappear inside the MXene-polymer composite film — of course, nothing disappears completely, the energy of the waves is transformed to a very small amount of heat which is easily dissipated by the material.”

A thin coating of the vanadium-based MXene material – less than the width of a human hair — could render a material impermeable to any electromagnetic waves in the X-band spectrum, which includes microwave radiation and is the most common frequency produced by devices. Gogotsi predicts that this development could be important for high-stakes applications such as medical and military settings when maintaining technological performance is crucial.

“Our results show that vanadium-based MXenes could play a key role in the expansion of Internet of Things technology and 5G and 6G communications.” Gogotsi said. “This study provides a new director for the development of thin, highly absorbent, MXene-based electromagnetic interference protection materials.”