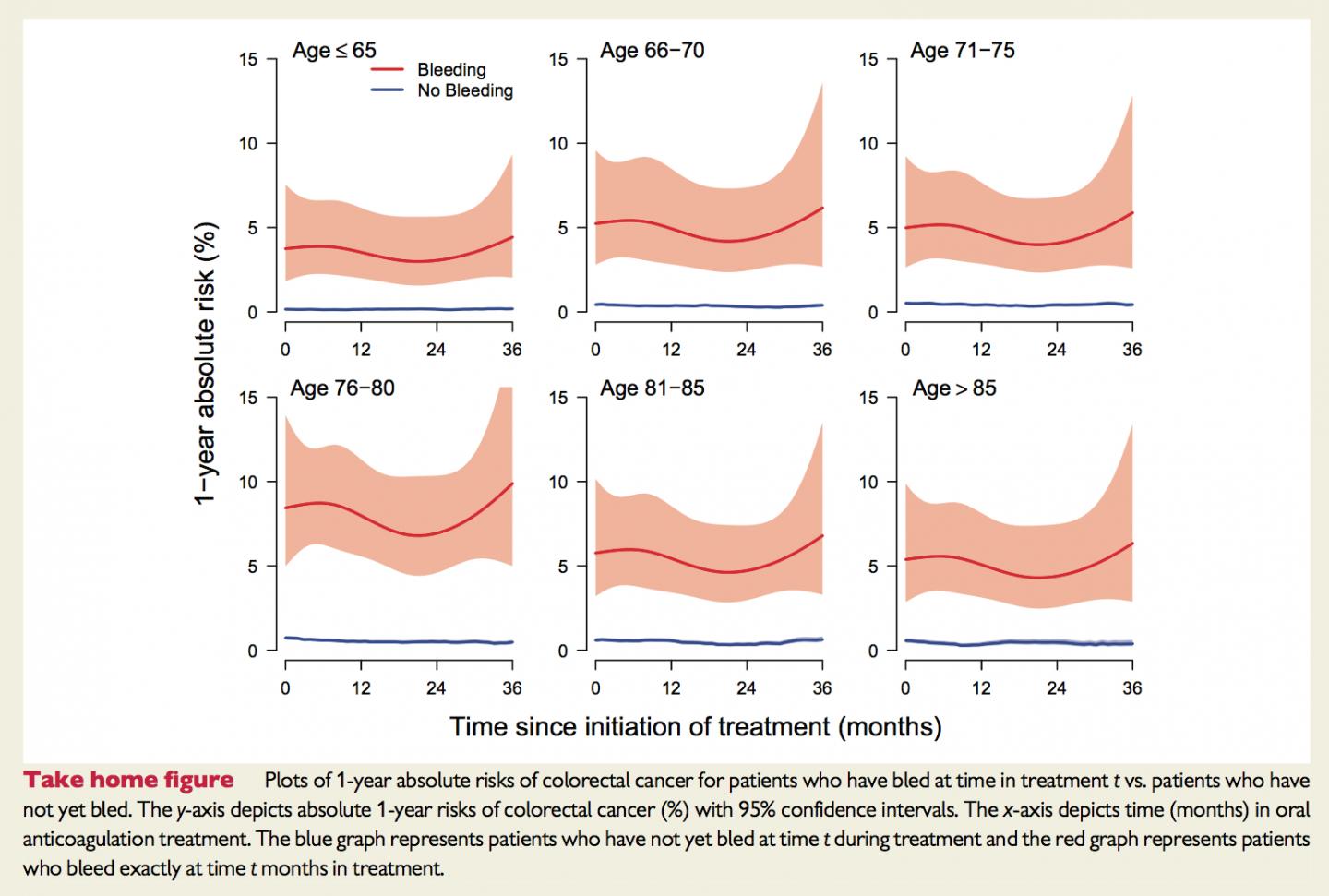 Patients who are being treated with blood-thinning drugs for irregular heart beat should always be investigated for bowel cancer if they experience gastrointestinal bleeding, say the authors of a study published in the European Heart Journal [1] today (Friday).

If doctors see bleeding in patients with atrial fibrillation, they may assume that it is due to oral anticoagulant drugs and alter the treatment rather than check for bowel cancer; but the study of nearly 125,500 Danish patients with atrial fibrillation shows that those who experienced bleeding were between 11 and 24 times more likely to be diagnosed with bowel cancer, compared to patients who did not have gastrointestinal bleeding. [2]

Dr Peter Vibe Rasmussen, from Herlev-Gentofte University Hospital, University of Copenhagen, Denmark, who led the research, said: “We found that between four and eight per cent of atrial fibrillation patients who experienced bleeding from their lower gastrointestinal tract were diagnosed with bowel cancer. Less than one per cent of patients were diagnosed with bowel cancer if they did not have bleeding.

“These high absolute risks of bowel cancer associated with bleeding provide a strong argument that if blood is detected in the stools of patients being treated with oral anticoagulants, this is something doctors should worry about. Our findings underline the important point that patients with gastrointestinal bleeding should always be offered meticulous clinical examination, irrespective of whether or not they are taking anticoagulants. It should not be dismissed as a mere consequence of anticoagulant treatment.

“Our study is also a reminder that educating and informing our patients is of utmost importance. When patients start taking anticoagulants, we should tell them that if they see blood in their stools they should always consult their doctor. Timely examination could potentially provide early detection of bowel cancer.”

Patients with atrial fibrillation are often prescribed oral blood-thinning drugs, such as warfarin, dabigatran, rivaroxaban and apixaban, to prevent the formation of clots that can lead to stroke. However, bleeding from the gastrointestinal tract can be a side effect and is estimated to occur in about one to two per cent of these patients each year.

Dr Vibe Rasmussen said: “Cancer in the lower part of the digestive system develops over extended periods of time often without showing any symptoms. These tumours are called occult cancers. As a consequence, the cancer is most often not diagnosed until the patient experiences symptoms. Treatment with blood thinning medication, as often recommended in patients with heart disease, increases the risk of bleeding from the gastrointestinal tract. In this study we wanted to test the hypothesis that bleeding induced by oral anticoagulants could be due to the unmasking of an undiagnosed occult cancer.”

The researchers identified all patients aged between 18 and 100 years with a diagnosis of atrial fibrillation between 1 January 1996 and 31 December 2014 from the Danish national registers. Patients who took any oral anticoagulant were included in the study and were followed until the end of 2015. After excluding some patients for reasons such as not living in Denmark, already having a bowel cancer diagnosis, or having recently had hip or knee surgery, there was a total of 125,418 patients eligible for inclusion in the study.

During a maximum of three years of treatment, the researchers identified 2576 patients with bleeding from the lower gastrointestinal tract. Of these, 140 were diagnosed with bowel cancer within the first year after the bleeding was detected.

The researchers point out that with an aging population in many countries, the prevalence of atrial fibrillation is increasing, more people are treated with blood-thinning drugs and so gastrointestinal bleeding is likely to occur more frequently.

There is no suggestion that oral anticoagulants cause bowel cancer.

The main strength of the study is its large size and the fact that it included everyone in Denmark diagnosed with atrial fibrillation. Limitations of the study include: it is an observational study; there were no data available about risk factors such as alcohol consumption, dietary habits and obesity; adherence to oral anticoagulant therapy was assumed on the basis that patients were collecting their prescriptions; and selection bias may have occurred due to the fact that patients with more severe bleeding, combined with other, potentially cancer-related symptoms, are more likely to be referred for further investigation than patients with light bleeding and without any other symptoms.

How do you make adhesives for electronics, vehicles, and construction…