Black patients have a dramatically higher risk of advanced vision loss after a new diagnosis of primary open angle glaucoma (POAG) when compared to white patients, according to a new study from New York Eye and Ear Infirmary of Mount Sinai (NYEE). 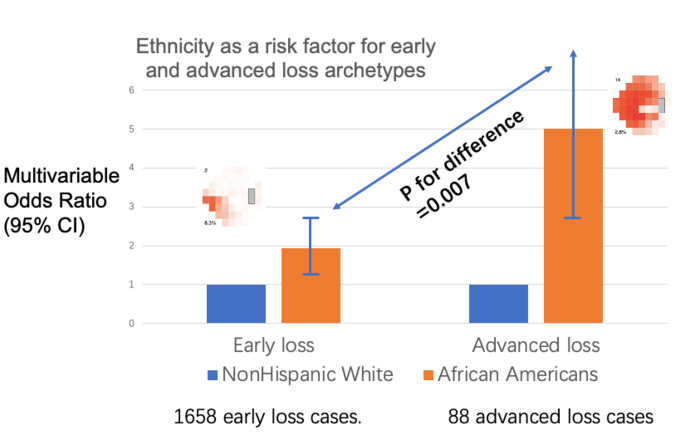 Black patients have a dramatically higher risk of advanced vision loss after a new diagnosis of primary open angle glaucoma (POAG) when compared to white patients, according to a new study from New York Eye and Ear Infirmary of Mount Sinai (NYEE).

The work, published July 25 in Translational Vision Science and Technology, shows that being of African heritage is an independent risk factor for this drastic decline in vision, and should prompt more eye screening in this population for early glaucoma detection. This is the first study to use an artificial intelligence algorithm to break down visual field loss in new-onset glaucoma cases among United States-based population groups.

The work is important because glaucoma is the leading cause of blindness in the United States and primary open angle glaucoma is the most common type. POAG is the leading cause of optic nerve degeneration that is related to the pressure level inside the eye, but other factors also contribute to this condition. Patients typically experience few or no symptoms until the disease progresses and they have irreversible vision loss—underscoring the need for early glaucoma screening and detection in high-risk patient groups.

“This study has tremendous implications for glaucoma screening of Blacks, who we already knew were a population at increased risk of glaucoma,” says senior author Louis R. Pasquale, MD, FARVO, Deputy Chair for Ophthalmology Research at the Icahn School of Medicine at Mount Sinai and Director of the NYEE Eye and Vision Research Institute. “Screening earlier in life could significantly increase the chance of detecting glaucoma and slowing down progression before it reaches one of the advanced patterns shown in our research.”

A team of researchers analyzed nearly 210,000 participants from three population-based databases of nurses and health professionals from the Nurses’ Health Study (enrolled between 1980 and 2018, and 1989-2019), and the Health Professionals Follow-up Study (enrolled between 1986 and 2018). Participants were over the age of 40 and their data was collected during comprehensive eye exams—none had glaucoma at baseline. They were followed biennially and provided updated information on their lifestyle, diet, and medical status, including glaucoma diagnosis.

Black patients made up 1.3 percent of the study, but had a nearly twofold increased risk of early visual field loss archetypes, and a sixfold higher risk for advanced field loss archetypes, when compared to white patients. Asian participants, who constituted 1.2 percent of the participants, had a nearly two-fold higher risk of early visual field loss compared to white patients, but did not have a dramatically higher rate of advanced patterns of visual field loss. Hispanic patients made up 1.1 percent of the study population, and did not have an increased risk of any archetypes compared to white patients; however, the study showed they were at risk of an archetype showing initial loss near the center of their visual field. The results were controlled for a number of variables including socioeconomics, frequency of eye exams, heart disease, diabetes, and exercise.

“This study started decades ago in three health professional cohorts that were not as diverse as current numbers—and if we collected more representation of people of color, the results would likely be even more profound,” Dr. Pasquale adds. “African descent is a risk factor for glaucoma blindness, and this work provides insight into why that might be the case. We suspect that the reason why Blacks presented with more advanced patterns of loss compared to whites is because the disease starts one to two decades earlier in the former group compared to the latter group. This emphasizes the importance of early screening strategies in Blacks to identify early-onset glaucoma so that visual disability in this population is averted.”

Dr. Pasquale says the next step for this work is to figure out the specific risk factors for the different patterns of visual loss seen in glaucoma patients—including genetic and environmental factors—so as to fully disentangle the pathogenesis of primary open angle glaucoma.

This study was done with collaborators at Brigham and Women’s Hospital and Massachusetts Eye and Ear.  This work was supported by the National Eye Institute, part of the National Institutes of Health.

Mount Sinai Health System is one of the largest academic medical systems in the New York metro area, with more than 43,000 employees working across eight hospitals, over 400 outpatient practices, nearly 300 labs, a school of nursing, and a leading school of medicine and graduate education. Mount Sinai advances health for all people, everywhere, by taking on the most complex health care challenges of our time — discovering and applying new scientific learning and knowledge; developing safer, more effective treatments; educating the next generation of medical leaders and innovators; and supporting local communities by delivering high-quality care to all who need it.

Through the integration of its hospitals, labs, and schools, Mount Sinai offers comprehensive health care solutions from birth through geriatrics, leveraging innovative approaches such as artificial intelligence and informatics while keeping patients’ medical and emotional needs at the center of all treatment. The Health System includes approximately 7,300 primary and specialty care physicians; 13 joint-venture outpatient surgery centers throughout the five boroughs of New York City, Westchester, Long Island, and Florida; and more than 30 affiliated community health centers. We are consistently ranked by U.S. News & World Report’s Best Hospitals, receiving high “Honor Roll” status, and are highly ranked: No. 1 in Geriatrics and top 20 in Cardiology/Heart Surgery, Diabetes/Endocrinology, Gastroenterology/GI Surgery, Neurology/Neurosurgery, Orthopedics, Pulmonology/Lung Surgery, Rehabilitation, and Urology. New York Eye and Ear Infirmary of Mount Sinai is ranked No. 12 in Ophthalmology. U.S. News & World Report’s “Best Children’s Hospitals” ranks Mount Sinai Kravis Children’s Hospital among the country’s best in several pediatric specialties. The Icahn School of Medicine at Mount Sinai is one of three medical schools that have earned distinction by multiple indicators: It is consistently ranked in the top 20 by U.S. News & World Report’s “Best Medical Schools,” aligned with a U.S. News & World Report “Honor Roll” Hospital, and top 20 in the nation for National Institutes of Health funding and top 5 in the nation for numerous basic and clinical research areas. Newsweek’s “The World’s Best Smart Hospitals” ranks The Mount Sinai Hospital as No. 1 in New York and in the top five globally, and Mount Sinai Morningside in the top 20 globally. For more information, visit https://www.mountsinai.org or find Mount Sinai on Facebook, Twitter, and YouTube.