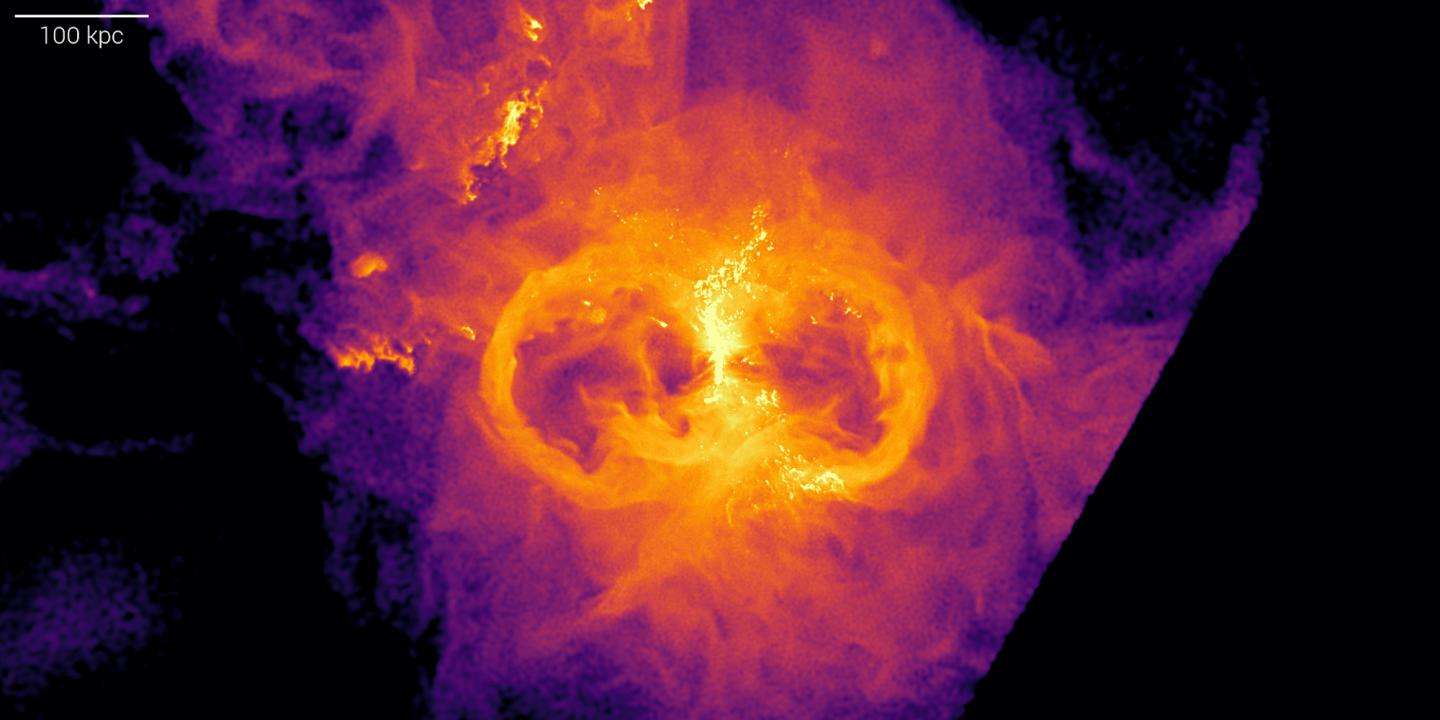 Research combining systematic observations with cosmological simulations has found that, surprisingly, black holes can help certain galaxies form new stars. On scales of galaxies, the role of supermassive black holes for star formation had previously been seen as destructive – active black holes can strip galaxies of the gas that galaxies need to form new stars. The new results, published in the journal Nature, showcase situations where active black holes can, instead, “clear the way” for galaxies that orbit inside galaxy groups or clusters, keeping those galaxies from having their star formation disrupted as they fly through the surrounding intergalactic gas.

Active black holes are primarily thought to have a destructive influence on their surroundings. As they blast energy into their host galaxy, they heat up and eject that galaxy’s gas, making it more difficult for the galaxy to produce new stars. But now, researchers have found that the same activity can actually help with star formation – at least for the satellite galaxies that orbit the host galaxy.

The counter-intuitive result came out of a collaboration sparked by a lunchtime conversation between astronomers specializing in large-scale computer simulations and observers. As such, it is a good example for the kind of informal interaction that has become more difficult under pandemic conditions.

Astronomical observations that include taking a distant galaxy’s spectrum – the rainbow-like separation of a galaxy’s light into different wavelengths – allow for fairly direct measurements of the rate at which that galaxy is forming new stars.

Going by such measurements, some galaxies are forming stars at rather sedate rates. In our own Milky Way galaxy, only one or two new stars are born each year. Others undergo brief bursts of excessive star formation activity, called “star bursts”, with hundreds of stars born per year. In yet other galaxies, star formation appears to be suppressed, or “quenched,” as astronomers say: Such galaxies have virtually stopped forming new stars.

A special kind of galaxy, specimens of which are frequently – almost half of the time – found to be in such a quenched state, are so-called satellite galaxies. These are part of a group or cluster of galaxies, their mass is comparatively low, and they orbit a much more massive central galaxy similar to the way satellites orbit the Earth.

Such galaxies typically form very few new stars, if at all, and since the 1970s, astronomers have suspected that something very much akin to headwind might be to blame: Groups and clusters of galaxies not only contain galaxies, but also rather hot thin gas filling the intergalactic space.

As a satellite galaxy orbits through the cluster at a speed of hundreds of kilometers per second, the thin gas would make it feel the same kind of “headwind” that someone riding a fast bike, or motor-bike, will feel. The satellite galaxy’s stars are much too compact to be affected by the steady stream of oncoming intergalactic gas.

But the satellite galaxy’s own gas is not: It would be stripped away by the oncoming hot gas in a process known as “ram pressure stripping”. On the other hand, a fast-moving galaxy has no chance of pulling in a sufficient amount of intergalactic gas, to replenish its gas reservoir. The upshot is that such satellite galaxies lose their gas almost completely – and with it the raw material needed for star formation. As a result, star-formation activity would be quenched.

The processes in question take place over millions or even billions of years, so we cannot watch them happening directly. But even so, there are ways for astronomers to learn more. They can utilize computer simulations of virtual universes, programmed so as to follow the relevant laws of physics – and compare the results with what we actually observe. And they can look for tell-tale clues in the comprehensive “snapshot” of cosmic evolution that is provided by astronomical observations.

Annalisa Pillepich, a group leader at the Max Planck Institute for Astronomy (MPIA), specializes in simulations of this kind. The IllustrisTNG suite of simulations, which Pillepich has co-led, provides the most detailed virtual universes to date – universes in which researchers can follow the movement of gas around on comparatively small scales.

IllustrisTNG provides some extreme examples of satellite galaxies that have freshly been stripped by ram pressure: so-called “jellyfish galaxies,” that are trailing the remnants of their gas like jellyfish are trailing their tentacles. In fact, identifying all the jellyfish in the simulations is a recently launched citizen science project on the Zooniverse platform, where volunteers can help with the research into that kind of freshly quenched galaxy.

But, while jellyfish galaxies are relevant, they are not where the present research project started. Over lunch in November 2019, Pillepich recounted a different one of her IllustrisTNG results to Ignacio Martín-Navarro, an astronomer specializing in observations, who was at MPIA on a Marie Curie fellowship. A result about the influence of supermassive black holes that reached beyond the host galaxy, into intergalactic space.

While IllustrisTNG is not detailed enough to include black hole jets, it does contain physical terms that simulate how an AGN is adding energy to the surrounding gas. And as the simulation showed, that energy injection will lead to gas outflows, which in turn will orient themselves along a path of least resistance: in the case of disk galaxies similar to our own Milky Way, perpendicular to the stellar disk; for so-called elliptical galaxies, perpendicular to a suitable preferred plane defined by the arrangement of the galaxy’s stars.

Over time, the bipolar gas outflows, perpendicular to the disk or preferred plane, will go so far as to affect the intergalactic environment – the thin gas surrounding the galaxy. They will push the intergalactic gas away, each outflow creating a gigantic bubble. It was this account that got Pillepich and Martín-Navarro thinking: If a satellite galaxy were to pass through that bubble – would it be affected by the outflow, and would its star formation activity be quenched even further?

Martín-Navarro took up this question within his own domain. He had extensive experience in working with data from one of the largest systematic surveys to date: the Sloan Digital Sky Survey (SDSS), which provides high-quality images of a large part of the Northern hemisphere. In the publicly available data from that survey’s 10th data, he examined 30,000 galaxy groups and clusters, each containing a central galaxy and on average 4 satellite galaxies.

In a statistical analysis of those thousands of systems, he found a small, but marked difference between satellite galaxies that were close to the central galaxy’s preferred plane and satellites that were markedly above and below. But the difference was in the opposite direction the researchers had expected: Satellites above and below the plane, within the thinner bubbles, were on average not more likely, but about 5% less likely to have had their star formation activity quenched.

With that surprising result, Martín-Navarro went back to Annalisa Pillepich, and the two performed the same kind of statistical analysis in the virtual universe of the IllustrisTNG simulations. In simulations of that kind, after all, cosmic evolution is not put in “by hand” by the researchers. Instead, the software includes rules that model the rules of physics for that virtual universe as naturally as possible, and which also include suitable initial conditions that correspond to the state of our own universe shortly after the Big Bang.

That is why simulations like that leave room for the unexpected – in this particular case, for re-discovering the on-plane, off-plane distribution of quenched satellite galaxies: The virtual universe showed the same 5% deviation for the quenching of satellite galaxies! Evidently, the researchers were on to something.

In time, Pillepich, Martín-Navarro and their colleagues came up with a hypothesis for the physical mechanism behind the quenching variation. Consider a satellite galaxy travelling through one of the thinned-out bubbles the central black hole has blown into the surrounding intergalactic medium. Due to the lower density, that satellite galaxy experiences less headwind, less ram pressure, and is thus less likely to have its gas stripped away.

Then, it is down to statistics. For satellite galaxies that have orbited the same central galaxies several times already, traversing bubbles but also the higher-density regions in between, the effect will not be noticeable. Such galaxies will have lost their gas long ago.

With the excellent agreement between the statistical analyses of both the SDSS observations and the IllustrisTNG simulations, and with a plausible hypothesis for a mechanism, this is a highly promising result. In the context of galaxy evolution, it is particularly interesting because it confirms, indirectly, the role of active galactic nuclei not only heating intergalactic gas up, but actively “pushing it away”, to create lower-density regions. And as with all promising results, there are now a number of natural directions that either Martín-Navarro, Pillepich and their colleagues or other scientists can take in order to explore further.