A black-coated Canada lynx was photographed for the first time by a researcher at the University of Alberta, Canada. Thomas Jung, also employed by the Government of Yukon, recorded the animal in a 30 second video on a cell phone. 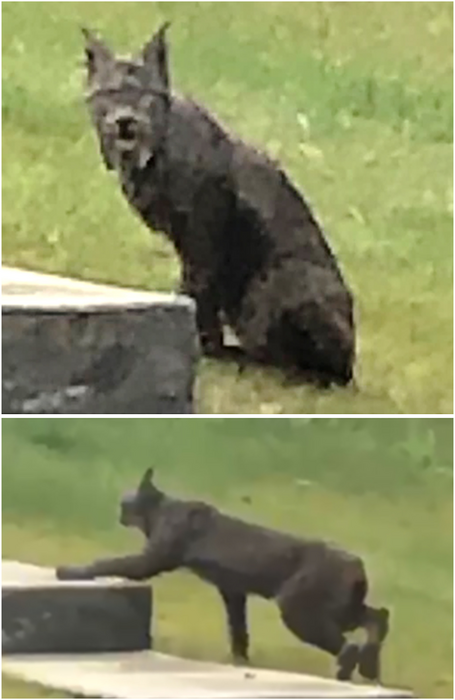 A black-coated Canada lynx was photographed for the first time by a researcher at the University of Alberta, Canada. Thomas Jung, also employed by the Government of Yukon, recorded the animal in a 30 second video on a cell phone.

This unique finding is reported in an article, “Paint it black: first record of melanism in Canada lynx (Lynx canadensis)”, in the journal Mammalia. The video can be viewed in the supplementary material accompanying the article.

The lynx was found on a summer day, 29 August 2020, in a rural residential area near the town of Whitehorse, Yukon, which contains low density housing embedded in mature forest dominated by white spruce. The lynx was viewed from a distance of about 50 meters and was relatively undisturbed by the presence of nearby people and a dog until it left the area, possibly due to the dog’s barking.

Several Canada lynx experts have examined the footage and confirmed that the animal is indeed a lynx. Unfortunately the low resolution images do not permit detailed examination, although some minor features are detectable. “It had a black coat containing whitish gray guard hairs throughout, as well as whitish gray hairs in the facial ruff and the rostrum and dorsal regions,” Jung reports.

Coat color in the entire Lynx genus tends to be stable, with little variation within species compared to that of other members of the cat family (felidae). Specifically, Canada lynx generally have silvery grayish coats in winter, changing to reddish brown in summer but accompanied by dark spots, and black hairs on the tips of their tails and ears.

In addition to being the first recorded case of melanism in Lynx canadensisi, this sighting adds to only a small number of coat color variations found in any member of the genus Lynx.

Variation in coat color within mammal species is of enduring interest, Jung says, partly because, in differing circumstances, it can either be of evolutionary benefit to the affected animals (adaptive) or can confer a disadvantage (maladaptive).

Researchers have been unable to determine whether melanism in any species of lynx is adaptive or maladaptive but Jung suggests that loss of camouflage for the black lynx when hunting in the snow is likely to be maladaptive. He speculates that the dark color might put the animal at a distinct disadvantage when hunting hares during winter.

The authors declare no conflicts of interest regarding this article. No animals were handled or disturbed during this work.