Bivalirudin is a safer and more effective anticoagulant than heparin for treating patients with the most serious type of heart attacks who undergo urgent percutaneous coronary intervention (PCI), and can lower the risk of death or major bleeding by 31 percent. 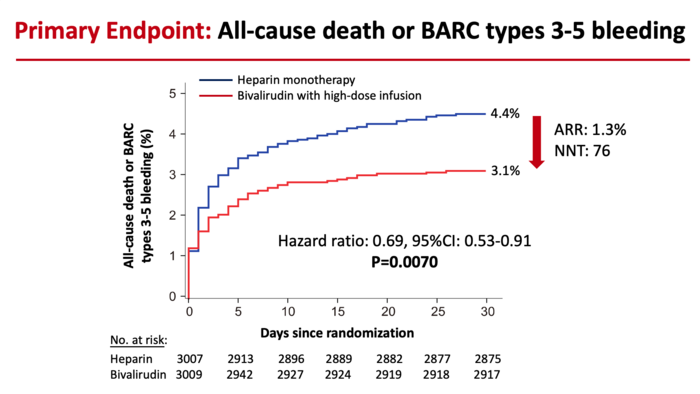 Bivalirudin is a safer and more effective anticoagulant than heparin for treating patients with the most serious type of heart attacks who undergo urgent percutaneous coronary intervention (PCI), and can lower the risk of death or major bleeding by 31 percent.

These are findings from a new study led by researchers from the Icahn School of Medicine at Mount Sinai. This is the first large-scale clinical trial to compare the two anticoagulants most widely used after PCI, and shows bivalirudin given with a two- to four-hour high-dose infusion significantly reduces death, major bleeding, and thrombosis when compared with heparin.

The results were announced Sunday, November 6, in a Late Breaking Clinical Trial presentation at the American Heart Association’s Scientific Sessions (AHA 22) in Chicago, and published in The Lancet. This work could have broad implications, changing the treatment course for hundreds of thousands of patients across the world who experience a major blockage of a heart artery, a condition known as ST-segment elevation myocardial infarction or STEMI. It is the most serious kind of heart attack.

“For the first time, this study identifies the best and safest treatment course for patients undergoing stenting to treat a STEMI heart attack,” says co-Principal Investigator Gregg W. Stone, MD, Director of Academic Affairs for the Mount Sinai Health System and Professor of Medicine (Cardiology), and Population Health Science and Policy, at Icahn Mount Sinai. “Compared with heparin, bivalirudin plus a short infusion substantially improved the likelihood of surviving a STEMI and reduced the two most feared complications—major bleeding and stent thrombosis.”

The most common anticoagulant used during primary PCI is heparin. However, its effects can be somewhat unpredictable, leading to higher-than-desirable rates of bleeding and blood clots. Bivalirudin is a newer anticoagulant that has more predictable “blood thinning” effects. Heparin and bivalirudin have been compared in six prior large randomized trials in patients with STEMI, but in those studies, they were administered with varying regimens and background therapies. This new research evaluates the two most widely used regimens of heparin and bivalirudin, which have never been directly compared with each other in an adequately sized trial.

Dr. Stone along with Yaling Han, MD, PhD, of Shenyang Northern Hospital in Shenyang, China led a team of researchers to analyze 6,106 patients enrolled in the study across 87 sites in China between February 2019 and April 2022. All underwent primary PCI for STEMI treatment, nearly all with a procedure that used the radial artery in the wrist to target the blocked heart artery. Patients were randomized to receive the two most widely used regimens of heparin and bivalirudin, which prior studies have shown to be the safest and most effective. One group received heparin alone, administered through an IV. The other group received bivalirudin through an IV, followed by a high-dose IV infusion for two to four hours after the procedure.

Investigators followed patients for 30 days following the procedure, the timeframe in which STEMI patients are at highest risk for adverse events. The primary goal of the study was to compare the occurrence of all-cause mortality or major bleeding. Researchers found that 4.4 percent of patients treated with heparin died or had a major bleed within 30 days, compared to 3.1 percent of patients treated with bivalirudin. Overall, the bivalirudin group had a 31 percent reduction in the rate of death or major bleeding compared with patients in the heparin group—a highly statistically significant reduction.

They also analyzed the rate of stent thrombosis—a complication that happens when the vessel abruptly closes as the result of a blood clot that typically leads to a second heart attack or death. This was also lower in the bivalirudin group at 0.4 percent compared with 1.1 in the heparin group, again a statistically significant reduction.

“These results are dramatic,” Dr. Stone said. “The simple decision to use bivalirudin during primary PCI in patients with heart attacks, which is now generic and thus inexpensive, can save hundreds of thousands of lives per year and prevent major bleeding and stent thrombosis compared with heparin.”

The BRIGHT-4 trial was an investigator sponsored and organized trial. The trial was funded by the Chinese Society of Cardiology Foundation (CSCF2019A01) with a research grant from Jiangsu Hengrui Pharmaceuticals Co., Ltd.

Mount Sinai Heart is among the top 6 in the nation for cardiology and cardiac surgery according to U.S. News & World Report.  Newsweek’s “The World’s Best Specialized Hospitals” ranks Mount Sinai Heart as No. 1 in New York and No. 4 globally.

It is part of Mount Sinai Health System, which is New York City’s largest academic medical system, encompassing eight hospitals, a leading medical school, and a vast network of ambulatory practices throughout the greater New York region. We advance medicine and health through unrivaled education and translational research and discovery to deliver care that is the safest, highest-quality, most accessible and equitable, and the best value of any health system in the nation. The Health System includes approximately 7,300 primary and specialty care physicians; 13 free-standing joint-venture centers; more than 410 ambulatory practices throughout the five boroughs of New York City, Westchester, and Long Island; and more than 30 affiliated community health centers. The Mount Sinai Hospital is ranked in U.S. News & World Report’s “Honor Roll” of the top 20 U.S. hospitals and among the top in the nation by specialty: No. 1 in Geriatrics and top 20 in Cardiology/Heart Surgery, Diabetes/Endocrinology, Gastroenterology/GI Surgery, Neurology/Neurosurgery, Orthopedics, Pulmonology/Lung Surgery, Urology, and Rehabilitation.