Birds do not habituate to traffic noise 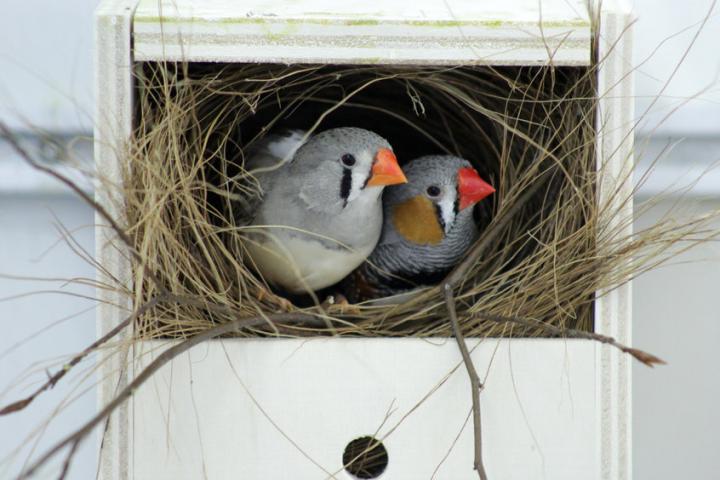 Noise pollution is one of the leading environmental health risks in humans. In zebra finches, noise affects their health and the growth of their offspring: Researchers at the Max Planck Institute for Ornithology in Seewiesen found that traffic noise suppresses normal glucocorticoid profiles in the blood, probably to prevent negative effects of chronically elevated levels on the organism. In addition, the young chicks of noise-exposed parents were smaller than chicks from quiet nests.

To date, studies on how birds are impacted by traffic noise have focused on the effects on the singing behaviour of birds, but less is known about how noise affects the heath of exposed animals.

Now, a research team at the Max Planck Institute for Ornithology in Seewiesen headed by Henrik Brumm has studied the effect of noise on stress hormone levels, health and reproductive success in breeding zebra finches. Two groups of birds bred in both noise and no-noise conditions. The noise groups were exposed to traffic noise recorded at several busy intersections in and around Munich during the whole breeding period. Just as in a real city, the traffic noise varied throughout the day, with the sounds of heavier traffic during the day and lighter traffic during the night.

Sometime after the end of the first breeding period the noise conditions changed for both groups and the same pairs bred again. The researchers recorded the level of stress hormones before, during and after the breeding period, respectively. In addition, they took measures of the immune function, and reproductive success, as well as the growth rates of the chicks.

They found that birds in constant traffic noise had lower levels of corticosterone in their blood compared to when they were breeding in a quiet environment. This was surprising because stress often results in higher levels of corticosterone, a hormone involved in metabolism regulation during stressful experiences. “In the birds breeding in quiet environments, their baseline corticosterone remained low throughout the breeding season”, says Sue Anne Zollinger, lead author of the study. “This suggests that the birds didn’t habituate to, or get used to the noise, since their hormone levels did not track the normal ups and downs that occur during the normal breeding cycle in non-noise exposed birds. Instead the suppression of the corticosterone levels may be a way to protect from the negative consequences of chronically elevated stress on the immune system.”

Chicks whose parents were exposed to traffic noise were smaller than chicks from parents that bred in quiet aviaries. However, once the chicks from noisy condition left the nest and could feed on their own, they managed to catch up with the chicks from quiet nests. The researchers, however, do not exclude long-term effects on the offspring. This is because a previous study showed that traffic noise exposure accelerated telomere loss in juvenile zebra finches, which is predictive of a shorter lifespan. On the number of chicks in the nest, however, traffic noise had no effect.

The study was done with birds in aviaries in order to exclude other factors generally associated with traffic, such as chemical pollution, light pollution and other differences found in urban areas for example in the density and composition of the bird communities, habitat structure, changes in microclimate or food type and availability. “Our data shows that traffic noise alone, without all the other disturbances of an urban environment, changes the physiology of birds and has consequences on their growth”, says Henrik Brumm, research group leader in Seewiesen. This means that even bird species which seem at first glance to be coping well in cities may be affected by chronic traffic noise.