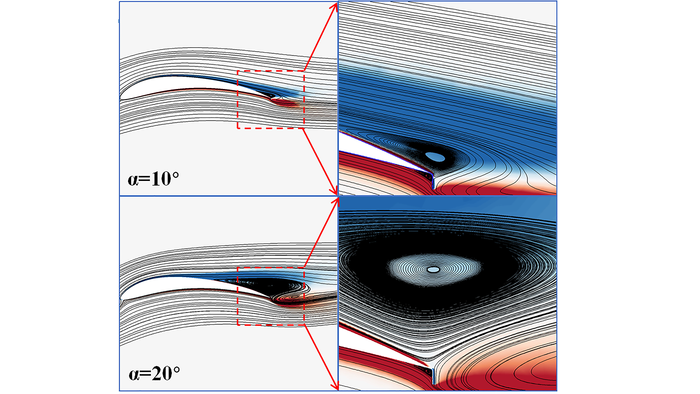 In the Journal of Renewable and Sustainable Energy, by AIP Publishing, scientists from China show a bionic approach combining features of a seagull’s wing with an engineered flow control accessory, known as a Gurney flap, can greatly improve wind turbine performance.

A Gurney flap is a small tab projecting at right angles from the trailing edge of a wing. Its presence disturbs wind flow patterns and is especially effective at improving performance at low angles of attack. In aerodynamics, the angle of attack is the angle between a line through the center of an aircraft wing and the oncoming flow of air.

Bionic flow control is a relatively new approach that imitates biological flight control systems — in other words, wings and feathers. The idea comes from the observation that during landing or in a gust of wind, the feathers on the top of a bird’s wings will pop out, creating a natural flap.

Computational and experimental studies show bionic feather-inspired flaps can increase lift and delay the onset of stalling at high angles of attack. Despite their advantages, adding bionic flaps can also reduce lift, particularly before a stall sets in. Therefore, the investigators tried an approach combining Gurney flaps with bionic features.

To achieve the best aerodynamic performance, the scientists simulated the use of the combined flow control accessory in a variety of situations, including high and low angle of attack and pre- and post-stall scenarios. They compared their computational simulations to experimental results for an aircraft wing undergoing a dynamic stall.

“The overall trend of the calculated lift curve is in good agreement with the experimental measurement results. Therefore, our simulation accuracy is considered acceptable, because the dynamic stall and its control are notoriously difficult to predict,” author Xiaomin Liu said.

The article “Using the combined flow control accessory to the aerodynamic performance enhancement of bio-inspired seagull airfoils” is authored by Liming Wu, Xiaomin Liu, Yang Liu, and Guang Xi. The article will appear in Journal of Renewable and Sustainable Energy on March 22, 2022 (DOI: 10.1063/5.0079060). After that date, it can be accessed at https://aip.scitation.org/doi/full/10.1063/5.0079060.

Journal of Renewable and Sustainable Energy is an interdisciplinary journal that publishes across all areas of renewable and sustainable energy relevant to the physical science and engineering communities. Topics covered include solar, wind, biofuels and more, as well as renewable energy integration, energy meteorology and climatology, and renewable resourcing and forecasting. See https://aip.scitation.org/journal/rse.

Journal of Renewable and Sustainable Energy