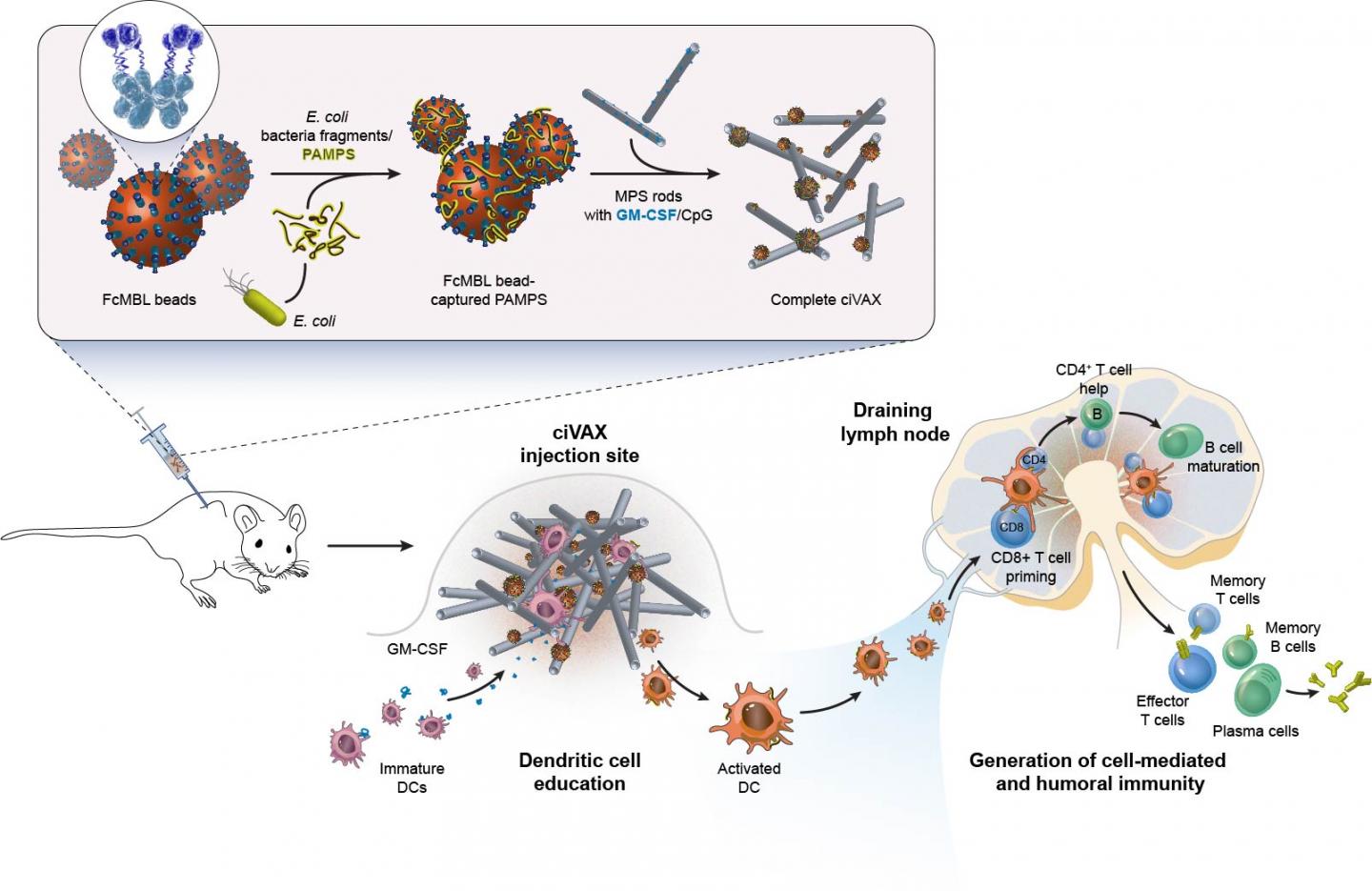 (BOSTON) — Current clinical interventions for infectious diseases are facing increasing challenges due to the ever-rising number of drug-resistant microbial infections, epidemic outbreaks of pathogenic bacteria, and the continued possibility of new biothreats that might emerge in the future. Effective vaccines could act as a bulwark to prevent many bacterial infections and some of their most severe consequences, including sepsis. According to the Centers of Disease Control and Prevention (DCD), “each year, at least 1.7 million adults in America develop sepsis. Nearly 270,000 Americans die as a result of sepsis [and] 1 in 3 patients who dies in a hospital has sepsis.” However, for the most common bacterial pathogens that cause sepsis and many other diseases, still no vaccines are available.

Now, as reported in Nature Biomedical Engineering, a multi-disciplinary team of researchers at Harvard’s Wyss Institute for Biologically Inspired Engineering and John A. Paulson School for Engineering and Applied Sciences (SEAS) developed a biomaterial-based infection vaccine (ciVAX) approach as a solution that could be broadly applied to this pervasive problem. ciVAX vaccines combine two technologies that are currently in clinical development for other applications, and that together enable the capture of immunogenic antigens from a broad spectrum of pathogens and their incorporation into immune cell-recruiting biomaterial scaffolds. Injected or implanted under the skin, ciVAX vaccines then reprogram the immune system to take action against pathogens.

“The protective powers of the vaccines that we have designed and tested so far and the immune responses they stimulated are extremely encouraging, and open up a wide range of potential vaccine applications ranging from sepsis prophylaxis to rapid measures against future pandemic threats and biothreats, as well as new solutions to some of the challenges in veterinary medicine,” said corresponding author David Mooney, Ph.D, who is a Founding Core Faculty member at the Wyss Institute and leads the Institute’s Immuno-Materials Platform. He also the Robert P. Pinkas Family Professor of Bioengineering at SEAS.

In their study, the researchers successfully tested ciVAX technology as a protective measure against the most common causes of sepsis, including Gram-positive S. aureus and Gram-negative E. coli strains. Highlighting the technology’s potential, they found that a prophylactic ciVAX vaccine, protected all vaccinated mice against a lethal attack with an antibiotic-resistant E. coli strain, while only 9% of unvaccinated control animals survived. In a pig model of septic shock induced by a different human E. coli isolate, a ciVAX vaccine prevented the development of sepsis in all four animals, while four unvaccinated animals developed severe and sudden sepsis within 12 hours. Finally, using an approach that mimicked a ring vaccination protocol in human or animal populations, a CiVax vaccine, when loaded with pathogen-derived material isolated from animals infected with one lethal E.coli strain, was able to cross-protect animals against a different lethal E. coli strain.

“Our method captures the majority of glycoprotein (and glycolipid) antigens from the pathogens, and presents these in their native form to the immune system, giving us access to a much larger spectrum of potential antigens than vaccines consisting of single or mixtures of recombinant antigens,” said co-first author and Wyss Lead Senior Staff Scientist Michael Super, Ph.D. “ciVAX vaccines against known pathogens can be fabricated and stored, but additionally, all components except the bacterial antigens can be pre-assembled from shelf-stable cGMP products. The complete vaccines can then be assembled in less than an hour once the antigens are available, which gives this technology unique advantages over other vaccine approaches when rapid responses are called for.” Super conceived the ciVAX concept with co-first author Edward Doherty, who as a former Lead Senior Staff Scientist worked with Mooney on the Wyss’ Immuno-Material platform on biomaterials-based vaccines for cancer applications.

Super and Wyss Founding Director Donald Ingber, M.D., Ph.D., who also authored the study, previously developed the pathogen capture technology used in ciVAX, which is based on a native human pathogen-binding opsonin – Mannose Binding Lectin (MBL) – that they fused to the Fc portion of an Immunoglobulin to generate FcMBL. Recombinant FcMBL binds to more than 120 different pathogen species and toxins, including bacteria, fungi, viruses and parasites. In earlier efforts, the team applied FcMBL to multiple diagnostic problems, and the technology is currently being tested in a clinical trial by the Wyss startup BOA Biomedical as part of a new sepsis treatment.

The second technology component of ciVAX component, the biomaterials-based vaccine technology, was developed as a conceptually new type of cancer immunotherapy by Mooney and his group at the Wyss Institute and SEAS, together with clinical collaborators at the Dana-Farber Cancer Institute. Validated in a clinical trial in human cancer patients, a specifically designed cancer vaccine stimulated significant anti-tumor immune responses. Novartis is currently working to commercialize the vaccine technology for certain cancer applications, and a related biomaterials-based vaccine approach is being pursued by the Wyss startup Attivare Therapeutics, with Doherty and former Wyss researchers Benjamin Seiler and Fernanda Langellotto, Ph.D., who also co-authored this study, as founding members.

To assemble ciVAX vaccines, the team used FcMBL on magnetic beads to capture inactivated bacterial carbohydrate-containing molecules, known as Pathogen Associated Molecular Patterns (PAMPs), from the pathogen of choice, and then simply mixed the complexes with particles of mesoporous silica (MPS) and immune cell-recruiting and activating factors. Under the skin, MPS forms a permeable, biodegradable scaffold that recruits dendritic cells (DCs) of the immune system, reprograms them to present fragments of the captured PAMPs, and releases them again. The DCs then migrate to nearby draining lymph nodes where they orchestrate a broad immune response against the bacterial pathogen. The team found that ciVAX vaccines rapidly enhanced the accumulation and activation of DCs at injection sites and the numbers of DCs, antibody-producing B cells, and different T cell types in draining lymph nodes, and thereby engineered effective pathogen-directed immune responses.

“Beyond the potential of reducing the risk for sepsis in and out of hospitals, our ciVAX vaccine technology has the potential to save the lives of many individuals threatened by a multitude of pathogens, in addition to potentially preventing the spread of infections in animal populations or livestock before they reach humans. It is a terrific example how Wyss researchers from different disciplines and experiences self-assemble around medical problems that urgently need to be solved to create powerful new approaches,” said Ingber who is also the Judah Folkman Professor of Vascular Biology at HMS and Boston Children’s Hospital, and Professor of Bioengineering at the Harvard John A. Paulson School of Engineering and Applied Sciences.

The Harvard John A. Paulson School of Engineering and Applied Sciences serves as the connector and integrator of Harvard’s teaching and research efforts in engineering, applied sciences, and technology. Through collaboration with researchers from all parts of Harvard, other universities, and corporate and foundational partners, we bring discovery and innovation directly to bear on improving human life and society.