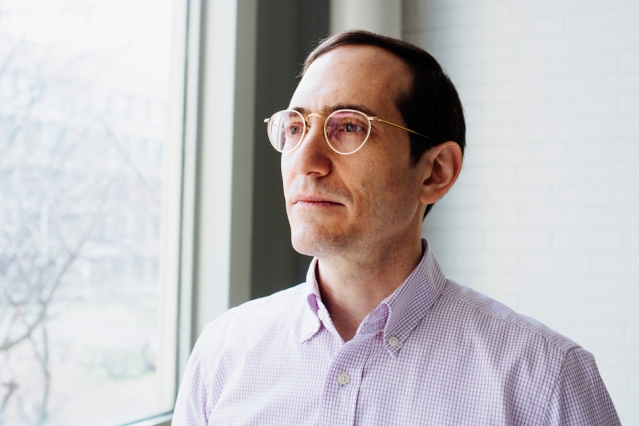 Cells are incredibly complicated machines with thousands of interacting parts — and disruptions to any of those interactions can cause disease.

Tracing those connections to seek the root cause of disease is a daunting task, but it is one that MIT biological engineer Ernest Fraenkel relishes. His lab takes a systematic approach to the problem: By comparing datasets that include thousands of events inside healthy and diseased cells, they can try to figure out what has gone awry in cells that are not functioning properly.

“The central challenge of this field is how you take all those different kinds of data to get a coherent picture of what’s going on in a cell, what is wrong in a diseased cell, and how you might fix it,” says Fraenkel, an associate professor of biological engineering.

This type of computational modeling of biological interactions, known as systems biology, can help to reveal possible new drug targets that might not emerge through more traditional biological studies. Using this approach, Fraenkel has deciphered some key interactions that underlie Huntington’s disease as well as glioblastoma, an incurable type of brain cancer.

As a high-school student in New York City, Fraenkel had broad interests, and participated in a special program where physics, chemistry, and biology were taught together. The program’s teacher, a Columbia University student, suggested that Fraenkel do some summer research at a lab at Columbia. The lab was run by Cyrus Levinthal, a physicist who had previously taught one of the first biophysics classes at MIT.

“He had this cool lab where they were doing image analysis of neurons, and modeling proteins, and doing experiments. I just thought it was fantastic. That’s when I decided I wanted to go into science,” Fraenkel recalls.

He enjoyed the lab so much that he dropped out of high school and starting working there full time, while also taking a few classes at Columbia. After earning a high-school equivalency degree, Fraenkel went to Harvard University to study chemistry and physics, then earned his PhD in biology from MIT. As in high school, he was drawn to all of the sciences, and enjoyed pursuing knowledge from all angles, ignoring the traditional boundaries between fields.

“My early experience was that they were all deeply connected,” Fraenkel says.

As a graduate student, he studied structural biology, which uses tools such as X-ray crystallography to understand biological molecules. “What drew me to the field was really the fact that it was very data-rich in a way that biology, at the time, was not,” Fraenkel says.

However, that was about to change: While Fraenkel was doing a postdoctoral fellowship in structural biology at Harvard, new techniques — such as genome sequencing and measurement of RNA levels inside cells — were generating huge amounts of information. Helping to crunch those numbers seemed an enticing prospect.

“As I was finishing up my postdoc I was realizing more and more that I wanted to study biology at a more general level,” Fraenkel says. “I really wanted to find out whether there was a more systematic way of trying to understand biology.”

After leaving Harvard, he became a Whitehead Fellow, allowing him to set up his own lab at the Whitehead Institute and pursue his new interest in systems biology. From there, he joined MIT’s Department of Biological Engineering, which had just been formed.

Now, Fraenkel’s lab analyzes vast amounts of data, including not only genomic data but also measurements of proteins and other molecules found in cells. For each set of cells, healthy or diseased, he tries to devise models that could explain what is producing the data. “One way to think about it is a map of a city where these proteins or genes are lighting up different things, and you have to figure out what the wiring is underneath that’s got them talking to each other,” he says.

To do that, his team uses algorithms they have developed themselves or adapted from network analysis strategies used to analyze the Internet. In the biological networks that Fraenkel studies, connections form between nodes representing a protein, gene, or other small molecule. Nodes that differ between diseased and healthy cells light up in a different color. Ideally, just a few such nodes would light up, but this is usually not the case, Fraenkel says. Instead, you end up with a wiring diagram with color all over the place.

“We lovingly call those things ‘hairballs,’” he says. “You get these giant hairball diagrams which really haven’t made the problem any easier — in fact, they’ve made it harder. So our algorithms go into that hairball and try to figure out which piece of it is most relevant to the disease, by weighing the probability of different kinds of events being disease-relevant.”

Those algorithms filter out the irrelevant information, or noise, and zoom in on the pieces of the network that seem to be the most likely to be related to the disease in question. Then, the researchers do experiments in living cells or animals to test the models generated by the algorithms.

Using this approach, Fraenkel has developed model networks for Huntington’s disease and glioblastoma. Such studies have revealed interactions that might never have been otherwise identified: For example, blocking estrogen can help prevent the growth of glioblastoma cells.

“The fundamental thing we’re trying to do is take an unbiased view of the biology,” Fraenkel says. “We’re going to look everywhere. We’ll let the data tell us which processes are important and which ones are not.”

Study details a link between inflammation and cancer

Scienmag May 10, 2021 0
Credit: Living Memory Home When a loved one dies, memories of that person become particularly valuable…

Researchers find parallels in spread of brain cancer in mammals,…

Jealous feelings can act as a tool to strengthen friendships

Not just a phase