Biologists at the University of Cincinnati are studying low-cost ways to improve water quality and wildlife habitat in urban creeks. 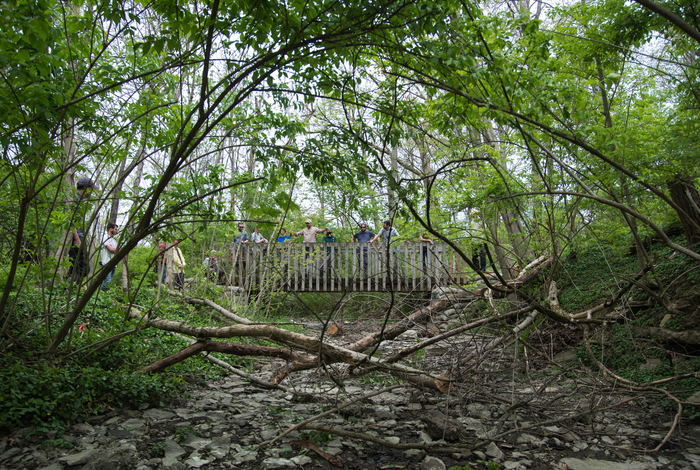 Biologists at the University of Cincinnati are studying low-cost ways to improve water quality and wildlife habitat in urban creeks.

Like those found in many large cities, Cincinnati’s streams are routinely affected by routine flash floods, sewage overflows, pollution and stormwater runoff.

UC biologists Stephen Matter and Michael Booth are examining whether water quality and wildlife habitat can be improved simply by adding a touch more of Mother Nature. With a team of volunteers, they placed fallen logs and branches in select parts of the upper Cooper Creek, a stream in the Cincinnati suburb of Blue Ash that drains downstream into the larger Mill Creek and Ohio River.

The addition of fallen timber could help slow periodic floodwaters, create more standing pools for fish during droughts and reduce nutrients that could make their way downstream, researchers said.

“Cooper Creek typifies a lot of issues streams in Hamilton County face,” said Booth, an assistant professor who studies fish and aquatic ecology across the country.

“We know wood plays an important role for creating wildlife habitat. Cooper Creek is a boring place — lots of rocks but not much else,” he said. “In creeks you’d like to see a variety of habitats, fallen logs, standing pools and flowing water.”

The UC researchers presented the project in April to the Geological Society of America’s sectional conference in Cincinnati. The project is supported by the Ohio Water Resources Center through a U.S. Geological Survey grant.

Greater Cincinnati has an extensive network of creeks feeding its major rivers.

“These streams really are the lifeblood of the natural system,” said Matter, an associate professor of biology in UC’s College of Arts and Sciences.

“Most of our creeks are these small headwater streams. If you walk through Cincinnati, you’re going to run into one of these in every neighborhood,” Matter said. “Often they’re places we’d like to see nature.”

But some Cincinnati creeks see raw sewage overflow during storms, which makes them a potential health risk, Matter said.

In Cincinnati, most creeks help divert standing water off roads, so they can turn from a trickle to a torrent after heavy rains. Fish and other aquatic life can be swept far downstream.

“There are lots of impervious surfaces. When it rains, you see a massive increase in stream flow. This leads to major changes in sediment and habitat available for aquatic life,” Booth said.

As a result, while Ohio is home to 170 native freshwater fish, the upper section of Cooper Creek is home to just three species of fish today, Booth said.

“As we go downstream, we might add four or five more species,” he said.
That’s a startling lack of biodiversity and a sign of an unhealthy ecosystem, he said.

“But we would definitely expect to see double the number of fish species if we had better habitat and better connectivity for fish to move back up into these sections,” Booth said. “We’re looking for a cost-effective solution to deploy to improve urban streams.”

“If a stream goes dry between rain events, the fish aren’t going to care how polluted the water is,” Lehmann said.

But by placing heavy logs in strategic places in the creek where flooding won’t easily be able to wash them downstream, Lehmann said he hopes to use the rush of water to his advantage to create intermittent pools of water where fish and other aquatic life can survive between storms.

“Everybody understands that when a stream goes dry, fish are out of luck,” he said. “If we jam one side of a log against a tree, we can force the flow of water under the log to scour out a depression that will hold water in dry times.”

Restoring the natural hydrology of creeks can be expensive and labor-intensive, often requiring intrusive heavy equipment. Researchers are hoping to see similar benefits from less drastic efforts than bringing in backhoes.

“I like to focus on scalable solutions,” Lehmann said. “You don’t have to mow down the forest to get in there. You don’t need to hire engineers or obtain Clean Water Act permits. And the wood is available free of charge.”

To gauge the project’s effectiveness, researchers plan to add little passive transponders to each log and return to see if the wood gets washed downstream or remains in place as they hope it will.

If the project is successful, it could demonstrate that relatively simple efforts can have profound benefits. Hamilton County is home to more than 1,000 headwater streams that feed its lakes and rivers, said Amanda Nurre, watershed specialist with the Great Parks of Hamilton County.

“We have a very impressive watershed in Hamilton County. There are small streams in every park. We’re very interested in finding low-cost ways to improve our streams. I think it could be a useful tool,” she said. “I’m optimistic to see if it can work.”