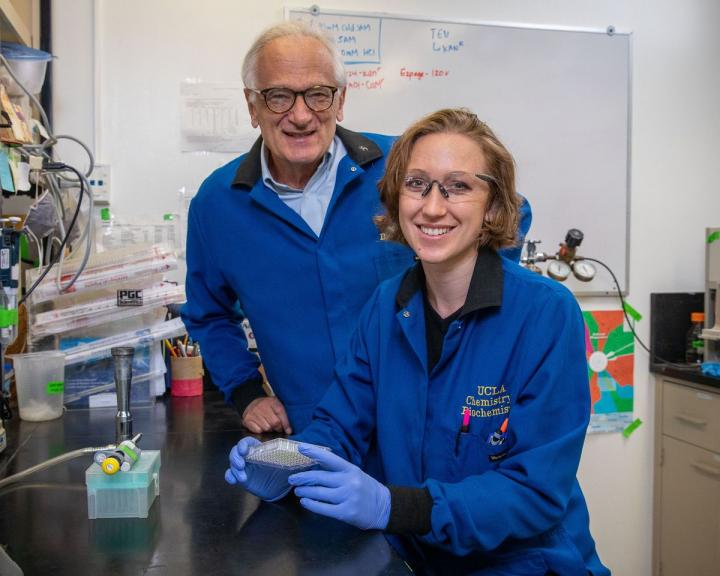 More than three decades of research on Alzheimer’s disease have not produced any major treatment advances for those with the disorder, according to a UCLA expert who has studied the biochemistry of the brain and Alzheimer’s for nearly 30 years. “Nothing has worked,” said Steven Clarke, a distinguished professor of chemistry and biochemistry. “We’re ready for new ideas.” Now, Clarke and UCLA colleagues have reported new insights that may lead to progress in fighting the devastating disease.

Scientists have known for years that amyloid fibrils — harmful, elongated, water-tight rope-like structures — form in the brains of people with Alzheimer’s, and likely hold important clues to the disease. UCLA Professor David Eisenberg and an international team of chemists and molecular biologists reported in the journal Nature in 2005 that amyloid fibrils contain proteins that interlock like the teeth of a zipper. The researchers also reported their hypothesis that this dry molecular zipper is in the fibrils that form in Alzheimer’s disease, as well as in Parkinson’s disease and two dozen other degenerative diseases. Their hypothesis has been supported by recent studies.

Alzheimer’s disease, the most common cause of dementia among older adults, is an irreversible, progressive brain disorder that kills brain cells, gradually destroys memory and eventually affects thinking, behavior and the ability to carry out the daily tasks of life. More than 5.5 million Americans, most of whom are over 65, are thought to have dementia caused by Alzheimer’s.

The UCLA team reports in the journal Nature Communications that the small protein beta amyloid, also known as a peptide, that plays an important role in Alzheimer’s has a normal version that may be less harmful than previously thought and an age-damaged version that is more harmful.

Rebeccah Warmack, who was a UCLA graduate student at the time of the study and is its lead author, discovered that a specific version of age-modified beta amyloid contains a second molecular zipper not previously known to exist. Proteins live in water, but all the water gets pushed out as the fibril is sealed and zipped up. Warmack worked closely with UCLA graduate students David Boyer, Chih-Te Zee and Logan Richards; as well as senior research scientists Michael Sawaya and Duilio Cascio.

What goes wrong with beta amyloid, whose most common forms have 40 or 42 amino acids that are connected like a string of beads on a necklace?

The researchers report that with age, the 23rd amino acid can spontaneously form a kink, similar to one in a garden hose. This kinked form is known as isoAsp23. The normal version does not create the stronger second molecular zipper, but the kinked form does.

“Now we know a second water-free zipper can form, and is extremely difficult to pry apart,” Warmack said. “We don’t know how to break the zipper.”

The normal form of beta amyloid has six water molecules that prevent the formation of a tight zipper, but the kink ejects these water molecules, allowing the zipper to form.

“Rebeccah has shown this kink leads to faster growth of the fibrils that have been linked to Alzheimer’s disease,” said Clarke, who has conducted research on biochemistry of the brain and Alzheimer’s disease since 1990. “This second molecular zipper is double trouble. Once it’s zipped, it’s zipped, and once the formation of fibrils starts, it looks like you can’t stop it. The kinked form initiates a dangerous cascade of events that we believe can result in Alzheimer’s disease.”

Clarke thinks the kinks in this amino acid form throughout our lives, but we have a protein repair enzyme that fixes them.

“As we get older, maybe the repair enzyme misses the repair once or twice,” he said. “The repair enzyme might be 99.9% effective, but over 60 years or more, the kinks eventually build up. If not repaired or if degraded in time, the kink can spread to virtually every neuron and can do tremendous damage.”

“The good news is that knowing what the problem is, we can think about ways to solve it,” he added. “This kinked amino acid is where we want to look.”

The research offers clues to pharmaceutical companies, which could develop ways to prevent formation of the kink or get the repair enzyme to work better; or by designing a cap that would prevent fibrils from growing.

Clarke said beta amyloid and a much larger protein tau — with more than 750 amino acids — make a devastating one-two punch that forms fibrils and spreads them to many neurons throughout the brain. All humans have both beta amyloid and tau. Researchers say it appears that beta amyloid produces fibrils that can lead to tau aggregates, which can spread the toxicity to other brain cells. However, exactly how beta amyloid and tau work together to kill neurons is not yet known.

In this study, Warmack produced crystals, both the normal and kinked types, in 15 of beta amyloid’s amino acids. She used a modified type of cryo-electron microscopy to analyze the crystals. Cryo-electron microscopy, whose development won its creators the 2017 Nobel Prize in chemistry, enables scientists to see large biomolecules in extraordinary detail. Professor Tamir Gonen pioneered the modified microscopy, called microcrystal electron diffraction, which enables scientists to study biomolecules of any size.

The research was funded by the National Science Foundation, National Institutes of Health, Howard Hughes Medical Institute, and the UCLA Longevity Center’s Elizabeth and Thomas Plott Chair in Gerontology, which Clarke held for five years.

Global change is triggering an identity switch in grasslands

Greening at high latitudes may inhibit the expansion of midlatitude deserts

Scienmag Jan 9, 2020
Credit: Yongli He Desertification has always been a serious challenge for human beings, especially in arid and…

The power of randomization: Magnetic skyrmions for novel computer…

Networking with ghosts in the machine… and speaking kettles