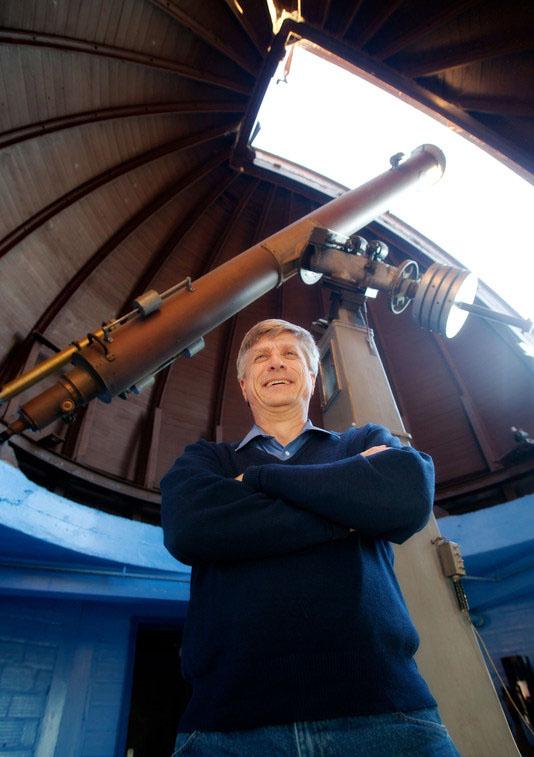 Currently, the faint star V Sagittae, V Sge, in the constellation Sagitta, is barely visible, even in mid-sized telescopes. However, around the year 2083, this innocent star will explode, becoming as bright as Sirius, the brightest star visible in the night sky. During this time of eruption, V Sge will be the most luminous star in the Milky Way galaxy.

This prediction was presented for the first time at the 235th American Astronomical Society meeting in Honolulu, by astronomers Bradley E. Schaefer, Juhan Frank and Manos Chatzopoulos, with the LSU Department of Physics & Astronomy.

“We now have a strong prediction for the future of V Sge,” Schaefer said. “Over the next few decades, the star will brighten rapidly. Around the year 2083, its accretion rate will rise catastrophically, spilling mass at incredibly high rates onto the white dwarf, with this material blazing away. In the final days of this death-spiral, all of the mass from the companion star will fall onto the white dwarf, creating a super-massive wind from the merging star, appearing as bright as Sirius, possibly even as bright as Venus.”

V Sge is a star system in a large and diverse class called Cataclysmic Variables, or CVs, consisting of an ordinary star in a binary orbit around a white dwarf star, where the normal star’s mass is slowly falling onto the white dwarf. CVs include multiple types of binary stars, often with spectacular behavior. V Sge is the most extreme of all the CVs, approximately 100 times more luminous than all other known CVs, and is powering a massive stellar wind, equal to the winds of the most massive stars prior to their deaths. These two extreme properties are caused by the fact that the normal star is 3.9 times more massive than the white dwarf.

“In all other known CVs the white dwarf is more massive than the orbiting normal star, so V Sge is utterly unique,” said Schaefer.

“Previously, astronomers have studied V Sge, realizing that it is an unusual system with extreme properties,” said Frank. “However, no one had realized that the binary orbit was in-spiraling very fast.”

This realization came from routine measures of V Sge’s brightness on old sky photos now archived at the Harvard College Observatory, providing a detailed history going back to the year 1890.

Startlingly, V Sge has been systematically brightening by a factor of 10X, 2.5 magnitudes, from the early 1890s up until the last decade. This unprecedented behavior was confirmed with archival data collected from the database of the American Association of Variable Star Observers, AAVSO, showing V Sge brightening by nearly a factor of 10X, 2.4 magnitudes, from 1907 until the last few years.

“V Sge is exponentially gaining luminosity with a doubling time scale of 89 years,” said Frank. “This brightening can only result with the rate of mass falling off the normal companion star increasing exponentially, ultimately because the binary orbit is in-spiraling rapidly.”

Schaefer said, “In anticipation of this fast decaying of the orbit, the fate of V Sge is sealed. The critical and simple physics are derived from V Sge having the companion star being much more massive than the white dwarf star, so forcing the rate of mass transfer to rise exponentially. Anticipating the next few decades, V Sge will in-spiral at a rapid pace with increasing brightness. Inevitably, this in-spiral will climax with the majority of the gas in the normal star falling onto the white dwarf, all within the final weeks and days. This falling mass will release a tremendous amount of gravitational potential energy, driving a stellar wind as never before seen, and raise the system luminosity to just short of that of supernovae at peak.”

This explosive event will have peak brightness over a month, with two stars merging into one star. The end result of the merger will produce a single star with a degenerate white dwarf core, a hydrogen-burning layer, surrounded by a vast gas envelope mostly of hydrogen.

“From this critical new input of the doubling time scale of 89 years, it becomes possible to directly calculate the future evolution of V Sge, all using standard equations describing the many physical mechanisms involved,” said Schaefer.

The calculations give a robust answer to the brightness with the in-spiral merger happen for the final merge event will be around the year 2083.

“The uncertainty in this date is ±16 years, arising mostly from not having a perfect measure of the doubling time scale due to the large intrinsic jitter of the brightness in the historical record,” said Frank. “Therefore, the merge will be approximately between 2067 and 2099, most likely near the middle of this range.”

Schaefer said, “Thus, V Sge will appear startlingly bright in the night sky. This is substantially brighter than the all-time brightest known nova (at -0.5) just over a century ago, and the last time any ‘guest star’ appeared brighter was Kepler’s Supernova in the year 1604.

“Now people the world over can know that they will see a wondrous guest star shining as the brightest in the sky for a month or so, being pointed at by the Arrow just below Cygnus, the Swan.”

The critical new observational input that forced our recognition of the fast in-spiral is from the century-long light curves (measures of brightness changes over the years), with these coming from two sources. The first source is from the data base of the American Association of Variable Star Observers, who also provided support on comparison stars, finder charts and more.

The second source is the Harvard College Observatory, where archival sky photographs record the brightness of V Sge back to the year 1890, with special help from Josh Grindlay and Alison Doane.

New findings on the largest natural sulfur source in the atmosphere