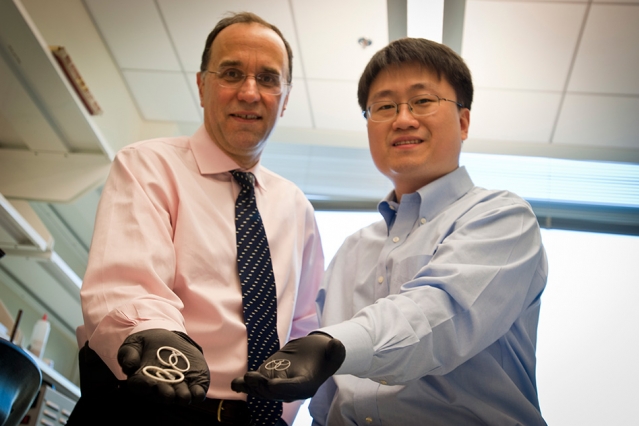 The millions of people worldwide who suffer from the painful bladder disease known as interstitial cystitis (IC) may soon have a better, long-term treatment option, thanks to a controlled-release, implantable device invented by MIT professor Michael Cima and other researchers.

In the mid-2000s, a urologist at Boston Children’s Hospital contacted Cima — at the behest of Institute Professor Robert Langer — with a plea: Could he develop an alternative treatment for IC? Treating the debilitating disease — which causes painful and frequent urination that can interrupt daily life — currently requires infusing the drug lidocaine into a patient’s bladder through a catheter. This provides temporary relief and must be repeated frequently.

“You hear that and you say, ‘There has to be a better way,’” says Cima, the David H. Koch Professor of Engineering.

Rising to the challenge, Cima and engineering student Heejin Lee SM ’04, PhD ’09 invented a solution: a pretzel-shaped silicone tube that could be inserted into the bladder, slowly releasing lidocaine over two weeks. Equipped with shape-memory wire, the tube could be straightened to fit into a catheter and spring back into its pretzel shape in the bladder, preventing it from being expelled during urination.

Since 2009, the platform — which was detailed in a 2010 issue of the Journal of Controlled Release — has been developed to carry lidocaine and tested in clinical trials by Taris Biomedical, co-founded by Cima and Langer, a longtime collaborator and entrepreneur.

Last month, pharmaceutical giant Allergan bought the worldwide rights to that specific device, called LiRIS (for lidocaine-releasing intravesical system), for $69 million up front and what could total more than $600 million in milestone payments. Allergan is prepping for phase-three clinical trials for LiRIS, which can deliver 400 milligrams of lidocaine to patients. (Because the device stays in the bladder so long, it also allows for smaller doses, reducing adverse reactions.)

Although future progress now depends on Allergan, Cima hopes to see LiRIS used commercially in a couple of years. But Taris now plans to tailor the platform device to carry other drugs into the bladder to treat various diseases, including bladder cancer. “Urology hasn’t really gotten the benefit of improvement in the biotech revolution. This type of technology can revolutionize how we do drug therapy in urology,” says Cima, who serves on Taris’ board of directors.

LiRIS started as Lee’s PhD thesis under the tutelage of Cima and with a grant from the MIT Deshpande Center for Technological Innovation, which allowed the two researchers, along with several MIT graduate students, to test much smaller versions of the device in animals.

“The Deshpande funding was an absolutely critical element in getting the data necessary to raise capital for Taris,” Cima says.

Indeed, collecting clinical data is a major challenge in spinning biotechnology out of the lab, notes Cima, who has founded four other companies in his time at MIT — MicroChips Inc., Springleaf Therapeutics, Entra Pharmaceuticals, and T2 Biosystems. “So if it hadn’t been for the Deshpande-funded study, no one would have believed us,” Cima adds.

In the MIT study, the researchers developed a prototype device by using a laser to cut a hole in a silicone tube to add drugs. “Right when we put it in, it just came right out,” Cima says, laughing. “I remember Heejin came into my office thinking his thesis was about to go out the window. But I said, ‘If we can solve this problem, that’s an invention, because the obvious solution doesn’t work.’”

Heejin then redesigned the device as a pretzel-shaped structure by incorporating a superelastic wire made from a special nitinol alloy. This structure is threaded into a catheter, and inserted into the bladder. When expelled from the catheter, the device returns to a pretzel shape and floats freely.

The researchers found that the pretzel shape — still used in today’s devices — was critical for retention in the bladder, as it prevents the device from simple expulsion through the urethra when the bladder contracts. With this shape, as the detrusor muscles contract, the two loops overlap and the device stiffens, rendering it unable to unfold or enter the urethra.

The team was able to slowly release drugs over a two-week period — typically long enough to treat an IC flare-up — and the device could then be removed by common cystoscopy procedures. Moreover, the researchers proved that drugs injected slowly into the bladder for so long could actually be absorbed.

Thanks to the data gathered from the study, Cima and Langer were able to launch Taris, with Lee as chief scientist, with $15 million in funding to enter phase-one clinical trials. (Taris would go on to earn $30 million in subsequent funding rounds.)

“It was a big unmet need,” Langer says of his decision to co-found Taris; he now serves on the company’s board of directors. “Once Michael and some of the students had done the work, collected the data to determine it was feasible, I thought it was something that could make a big impact.”

Taris’ first trial involved implanting an empty device (with no drugs) inside volunteers to test comfort levels. Half of the volunteers were involved in a mock procedure, where no device was implanted; the other half had the device implanted. “Each night for a couple weeks, a nurse called and asked about every ache and pain,” Cima says. After two weeks, there were none.

But the company’s clinical trials, from 2011 to 2012, delivered surprising findings that, Cima says, drew Allergan to invest in and eventually buy the technology.

Taris tested the device on IC patients, many of whom also had lesions called Hunner’s lesions, which affect about 10 to 15 percent of IC sufferers. Usually, doctors cauterize these lesions (which don’t disappear on their own) while patients are under anesthesia in an operating room. But the resulting scarring sometimes leads to patients losing some bladder function.

“Much to our surprise, in our trials, the lesions in those using LiRIS disappeared after two weeks” in five out of six patients, Cima says.

Another surprise was that follow-up meetings suggested reduced pain even several months following removal of the device. Results of both trials were published in 2012 in the journal Science Translational Medicine. (Last year, Taris began an ongoing focus study specifically on patients with Hunner’s lesions.)

“Pain is a subjective outcome,” Cima says, “but the disappearance of the Hunner’s lesions was a purely objective outcome. That objective result, I believe, is one important factor that Allegan decided to acquire the product. Taris itself had also become a leading expert in interstitial cystitis. So that helped too.”

With the Allergan acquisition funds, Taris will further develop the device to deliver drugs for other bladder diseases, including chemotherapy for bladder cancer — whose high recurrence rate is due, in part, to difficulties delivering drugs in a sustained way. Last year, Taris entered a research collaboration with AstraZeneca to develop novel treatments for bladder cancer.

“This device is a platform,” Cima says. “Whether it’s bladder cancer, overactive or underactive bladder — any of these indications where you might want to deliver drugs right to the bladder — it can do that.”

A member of the MIT Koch Institute, Cima is also working on other drug-delivery projects, such as intraperitoneal chemotherapy delivery to treat ovarian cancer, funded in part by the Bridge Project.