SAN FRANCISCO, CA—A while ago, some researchers had suggested that blocking a set of proteins, known as bromodomain and extraterminal (BET) proteins, might be a way to fight COVID-19. However, in a surprising study, scientists at Gladstone Institutes and UC San Francisco (UCSF) discovered that BET proteins are actually crucial for the body to fight the infection. In fact, the SARS-CoV-2 virus itself blocks the proteins to try to gain an advantage and continue to spread. 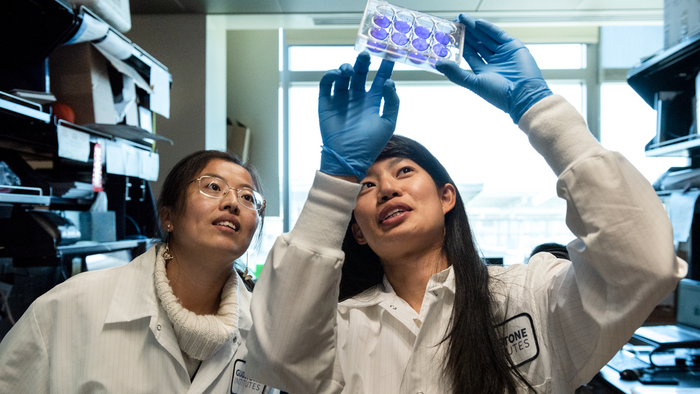 SAN FRANCISCO, CA—A while ago, some researchers had suggested that blocking a set of proteins, known as bromodomain and extraterminal (BET) proteins, might be a way to fight COVID-19. However, in a surprising study, scientists at Gladstone Institutes and UC San Francisco (UCSF) discovered that BET proteins are actually crucial for the body to fight the infection. In fact, the SARS-CoV-2 virus itself blocks the proteins to try to gain an advantage and continue to spread.

The new research, published in the journal Cell Reports, found that BET proteins have two distinct roles that affect how SARS-CoV-2 interacts with human cells: they give the virus a window into cells while also helping our cells defend themselves. These opposing functions explain the mixed results of previous experiments studying of the effect of targeting BET proteins on SARS-CoV-2 infection.

“Our study shows how complex and nuanced interactions between virus and host cells can be,” says Melanie Ott, MD, PhD, director of the Gladstone Institute of Virology and co-senior author of the new paper. “Even though blocking some BET proteins before viral exposure can help prevent infections, blocking other BET proteins actually plays right into the hands of the virus.”

The study’s other co-senior author is Danica Galonić Fujimori, PhD, a professor of cellular and molecular pharmacology at UCSF.

Directions from a Map

In 2020, Nevan Krogan, PhD, a senior investigator at Gladstone Institutes and director of the Quantitative Biosciences Institute at UCSF, assembled a detailed map showing which SARS-CoV-2 proteins directly interact with which proteins in infected human cells. When they perused Krogan’s results, Ott and Fujimori were surprised by one pairing: the virus’s envelope protein bound to BRD2 and BRD4, two members of the BET family of proteins.

Scientists thereafter discovered that one of the genes turned on by these BET proteins is ACE2, the same protein that SARS-CoV-2 relies on to get into cells. Indeed, it had been shown that completely blocking BET proteins prior to exposure to the virus could protect cells from infection.

But Ott’s lab had already been studying BET proteins in the context of HIV infection, and knew that they also control activation of genes related to inflammation, immunity, and cancer.  They wondered how and why SARS-CoV-2 would be directly interacting with BRD2 and BRD4 given their known roles in cellular responses to invading pathogens.

In this study, Gladstone graduate student Irene Chen and the rest of the team discovered that, in SARS-CoV-2 infected cells, the BET proteins turn on genes that ward off viruses—this is in addition to turning on the gene ACE2, which lets SARS-CoV-2 enter human cells. When the researchers blocked the BET protein BRD4 in mice already infected with COVID-19, rather than before infection, the mice’s symptoms grew worse and they experienced more severe disease.

These results suggested that BET proteins play a role in both enabling and fighting off COVID-19, yet still didn’t explain why or how the virus was directly binding to BRD2 or BRD4.

But a close look at SARS-CoV-2 revealed that the envelope protein has a small section that closely resembles human histones, which are complexes of proteins found along DNA. With additional experiments, the researchers revealed that SARS-CoV-2 was able to engage the BRD4 protein at the periphery of the cell nucleus by mimicking the histones that BET proteins naturally bind to—and this, in turn, prevented BRD4 from activating antiviral genes.

“This is an example of a viral protein that can actually mimic one our own proteins to fool our cells and prevent them from activating immune defenses that would kill the virus,” says Chen, who is a co-first author of the new paper along with James Longbotham, PhD, a former postdoctoral fellow at UCSF.

A Target for Treatment

The new findings indicate that existing drugs that simultaneously block all BET proteins likely won’t be effective in treating COVID-19—at least in patients who are already infected.

However, the new study also confirmed that different BET proteins play different roles in the infection cycle, which could lead to future therapeutics that target only specific BET proteins, or parts of these proteins. More research is also needed to understand how the timing of such treatment with an infection could work.

“It’s clear from our results that the BET drugs currently available are not suitable for COVID-19,” says Ott. “But certain elements of these drugs could be adapted for future drug development.”