Tokyo, Japan – As the global climate continues to change and extreme weather events increasingly threaten regions all over the world, accurate weather forecasting is becoming more important than ever. 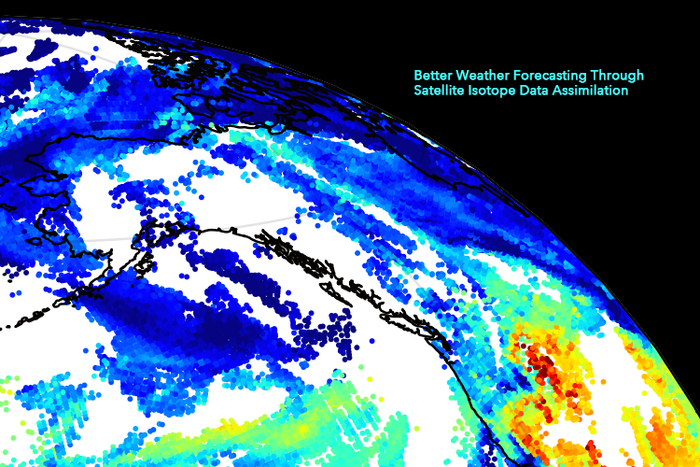 Tokyo, Japan – As the global climate continues to change and extreme weather events increasingly threaten regions all over the world, accurate weather forecasting is becoming more important than ever.

In a new study published in Scientific Reports, a research team led by Institute of Industrial Science, The University of Tokyo reports that weather forecast accuracy can be improved by several percentage points if satellite observations of water vapor isotope compositions are incorporated into a general circulation model.

Different isotopes of hydrogen and oxygen make individual water molecules heavier or lighter, and weather processes like evaporation and precipitation influence the distributions of these isotopes. These isotopes have potential to reveal the weather system, but have generally been neglected in meteorological models because of the relative scarcity of isotope data compared with conventional weather measurements like temperature and wind speed. However, advances in satellite technology have made it possible to fill this gap and improve forecasting ability.

For this study, the researchers used water vapor isotope data from the Infrared Atmospheric Sounding Interferometer (IASI), a satellite-based spectrometer that observes water vapor data in the mid-troposphere between 60°S to 60°N twice a day. Measurements from an altitude of 4.5 km were used because this altitude was where the isotope measurements were most reliable.

Experiments were conducted to determine how incorporating these isotope data affected the modeling of other weather variables at both the global and local scales. The global experiment showed improved model skill, especially in the mid-latitudes and in the Northern Hemisphere. Most weather variables showed improved modeling, especially air temperature and specific humidity.

To test the model in a local setting, the researchers investigated a low-pressure event over Japan that occurred in April, 2013. With the water vapor isotope data included, the model was better able to simulate the overall pressure pattern of this event.

According to study senior and corresponding author Kei Yoshimura, “Ours is the first study to assimilate real satellite observations of water vapor isotopes with a general circulation model and examine the effects on the modeling of both global and local dynamics. With the improvements we observed, and with the increasing availability of satellite isotope measurements, we expect further improvements to weather forecasting in the future based on isotope data.”

More than 120 research laboratories, each headed by a faculty member, comprise IIS, with more than 1,200 members including approximately 400 staff and 800 students actively engaged in education and research. Our activities cover almost all the areas of engineering disciplines. Since its foundation in 1949, IIS has worked to bridge the huge gaps that exist between academic disciplines and realworld applications.