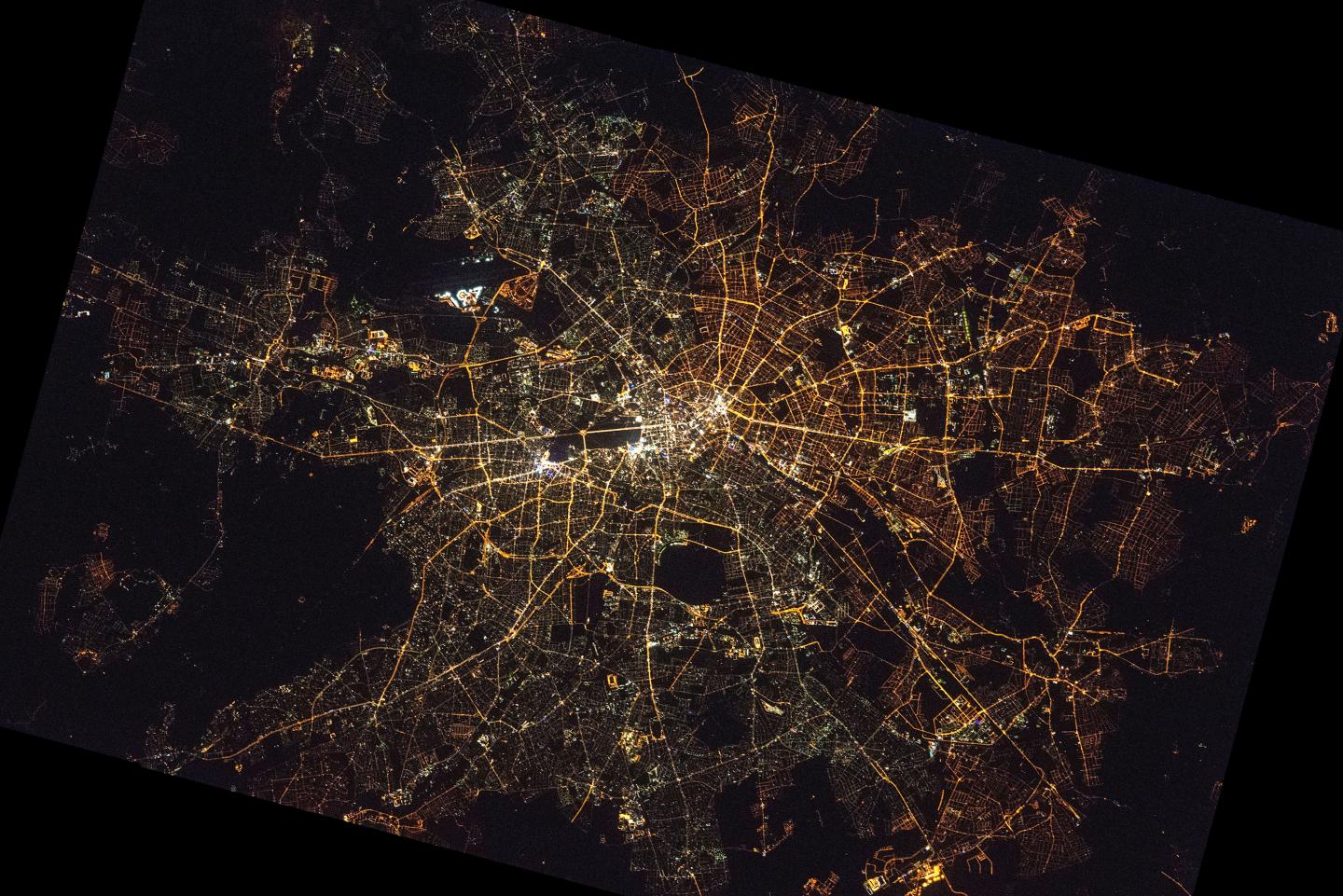 People can hardly imagine a city without night-time street lighting. But how do nocturnal animals such as bats respond to the illuminated urban landscape? In a recent study, scientists from the Leibniz Institute for Zoo and Wildlife Research (Leibniz-IZW), together with German and international colleagues, equipped common noctule bats (Nyctalus noctula) with mini GPS transmitters and recorded their trajectories in the sky above Berlin. They show that common noctules avoid brightly lit, built-up areas. The metropolitan area of Berlin is therefore mostly unsuitable as a habitat for bats. Dark corridors such as city forests, parks or watercourses, on the other hand, are of great importance for commuting and foraging. The results are published in the journal Landscape Ecology.

The international research team led by experts from the Leibniz-IZW investigated how common noctule bats react to various features of the urban landscape in the larger Berlin metropolitan area, in particular to artificial light at night. They were particularly interested in whether bats use illuminated areas for commuting and foraging or whether they switched to dark habitats.

“We noticed that some bats searched for food in areas with artificial light, especially along watercourses. Overall, however, they prefer the dark areas of the city,” says Christian Voigt, head of the Department of Evolutionary Ecology at Leibniz-IZW and first author of the paper. However, bats only hunt at street lights when water bodies or areas with high vegetation cover are nearby. Voigt and his colleagues suspect that many insects are present at these sites when insects are lured by the street lamps at rivers, channels and lakes: “Particularly near water bodies, swarms of insects can be found buzzing around lanterns after they have developed from larval stages into adult insects. Of course, this also attracts some bats who like to take advantage of this rich food supply”. In contrast, common noctule bats avoid artificial light when they commute between different feeding areas and their daytime roosts. For commuting, they prefer dark corridors such as forests, unlit city parks or waterways. Some even fly out of the city into the countryside and return before dusk.

For their investigations, the scientists equipped 20 common noctules with miniature GPS transmitters. The researchers began recording the GPS positions of the animals half an hour before sunset and repeated this every 30 seconds throughout the night. Using the flight speed and turning angles between successive GPS positions, they differentiated between commuting and foraging flights. When the bats commute between areas, they fly very fast and almost straight with only small turning angles. If they hunt for food, they fly slower and with much stronger curves and turns. This allowed the scientists to evaluate which areas the bats used for commuting and which for foraging.

“Our investigations show that large parts of Berlin are unsuitable for bats such as the common noctule due to light pollution and a high degree of impervious surfaces. Their preferred habitats are often isolated between heavily built-up areas and areas illuminated at night. Dark corridors such as forests and woods, unlit landscape parks and watercourses are of great importance as they allow animals to reach isolated feeding areas and roosts. However, increasing urbanisation and the associated light pollution are increasingly fragmenting urban habitats for bats,” Voigt emphasises.

The study provides important insights into how bats cope in urban habitats and in particular with artificial light. As bats are relevant in planning processes due to their high protection status, the results can contribute to effective management recommendations for the conservation of urban biodiversity. “Protective measures should include approaches that take artificial light into account. The goal should be to preserve and strengthen a network of dark habitats for bats and other nocturnal species in cities,” recommends Voigt.

Three visualizations illustrate the research results. They are based on an astrophoto (a photograph from outer space) of Berlin at night, on which the brightly lit as well as the dark areas of the city can be recognized. In two other images, this astrophoto is overlaid with the research results: In the first case, the coloured areas (blue) show the areas of the city that the bats prefer to hunt. In the second case, the coloured areas (red) show the preferred areas of the city that the bats prefer for commuting between day and night quarters. In both cases, the preferences are for parks and waterways (Tiergarten, Spree, Landwehrkanal, Berlin-Spandauer Schifffahrtskanal), while the brightest parts of the city (Alexanderplatz, Potsdamer Platz, Breitscheidplatz, Tegel Airport) are avoided.